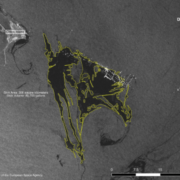 The Oil Rocks (Neft Daşları)  is a massive offshore oil complex in the Caspian Sea. The complex was constructed in the late 1940’s by the Soviet Union and has been producing oil consistently since 1951. The area around the Oil Rocks has experienced catastrophe in the past, when a fire at a nearby platform was responsible for the death of 32 workers and a particularly nasty oil spill in December 2015.

As part of SkyTruth’s Watchdog program, we keep an eye on locations such as this. Over the past 2 months, we estimate that over 380,000 gallons of oil have leaked into the Caspian Sea, based on our assumption that the slicks we are observing are 1 micron (1/1000th of a millimeter) thick. 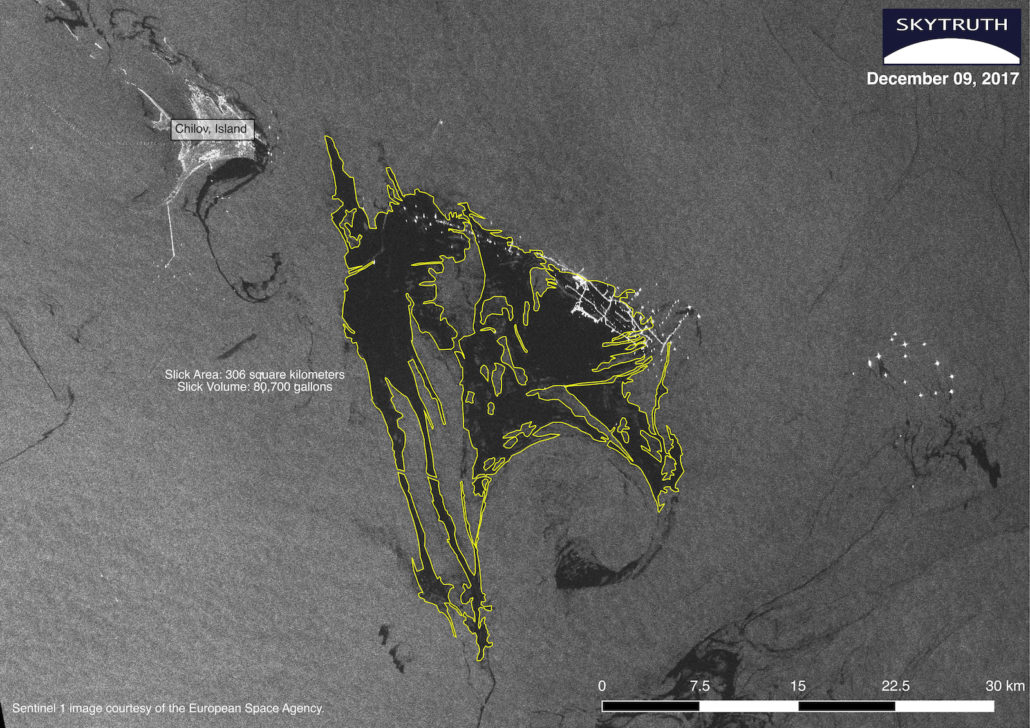 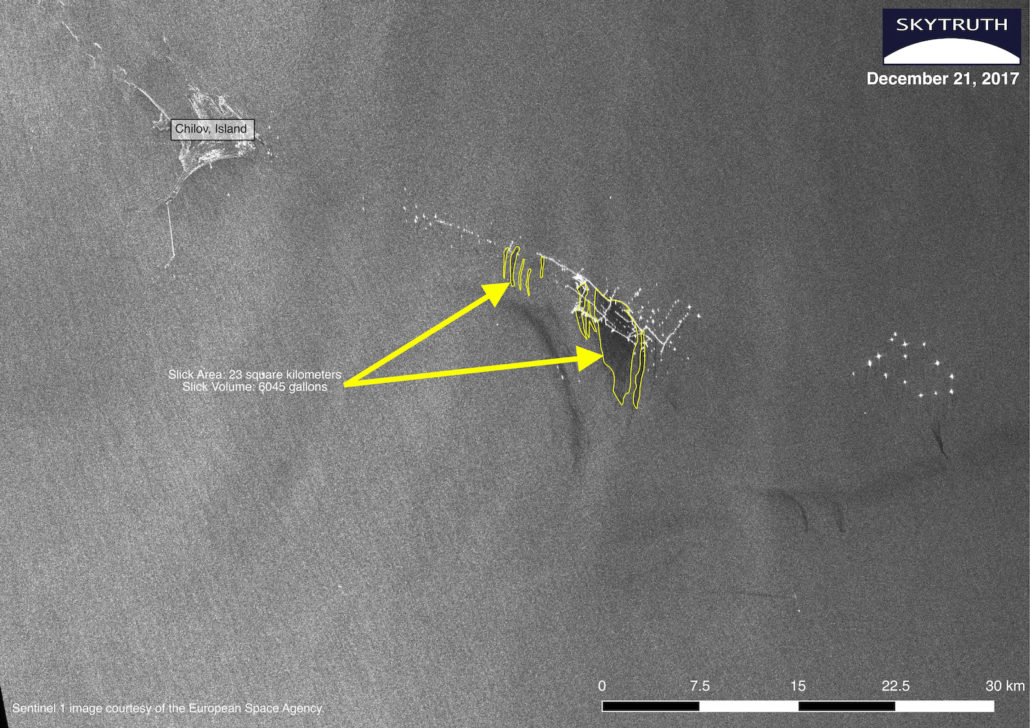 Above: Sentinel 1 collected this image of the Oil Rocks with a much smaller oil slick (23 square kilometers) on December 21, 2017.

Wind speeds in the Caspian Sea were as strong as 35 knots toward the south on December 21st and may have dispersed an additional volume of oil on the water’s surface. 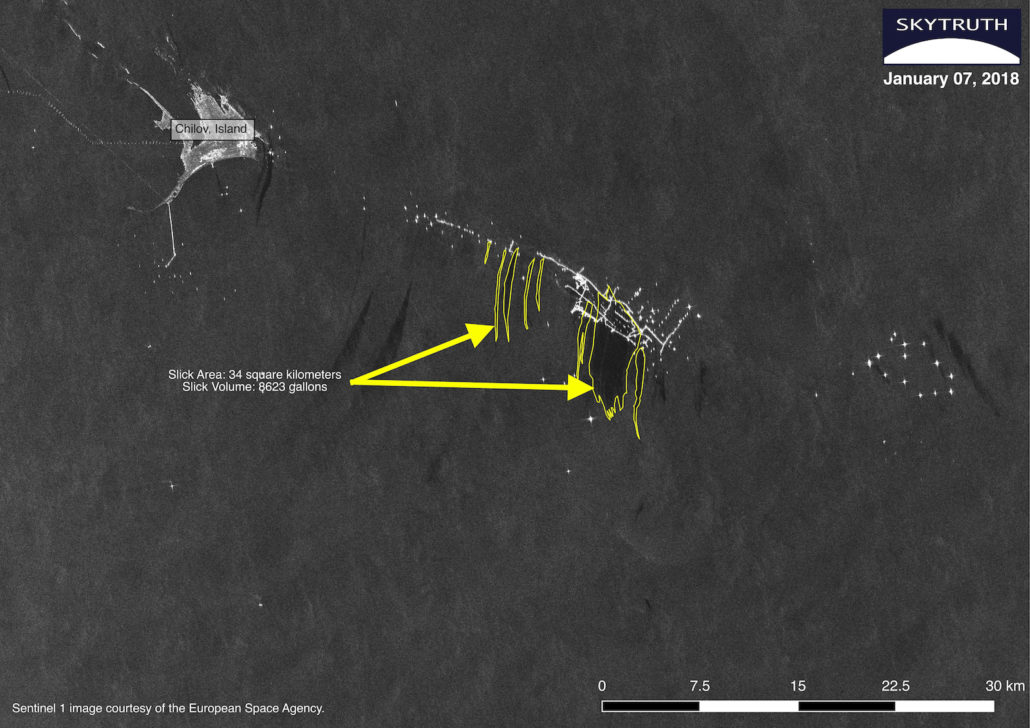 Above: Sentinel 1 imagery from January 7, 2018 reveals the Oil Rocks leaking oil. The slicks cover a total area of 34 square kilometers. 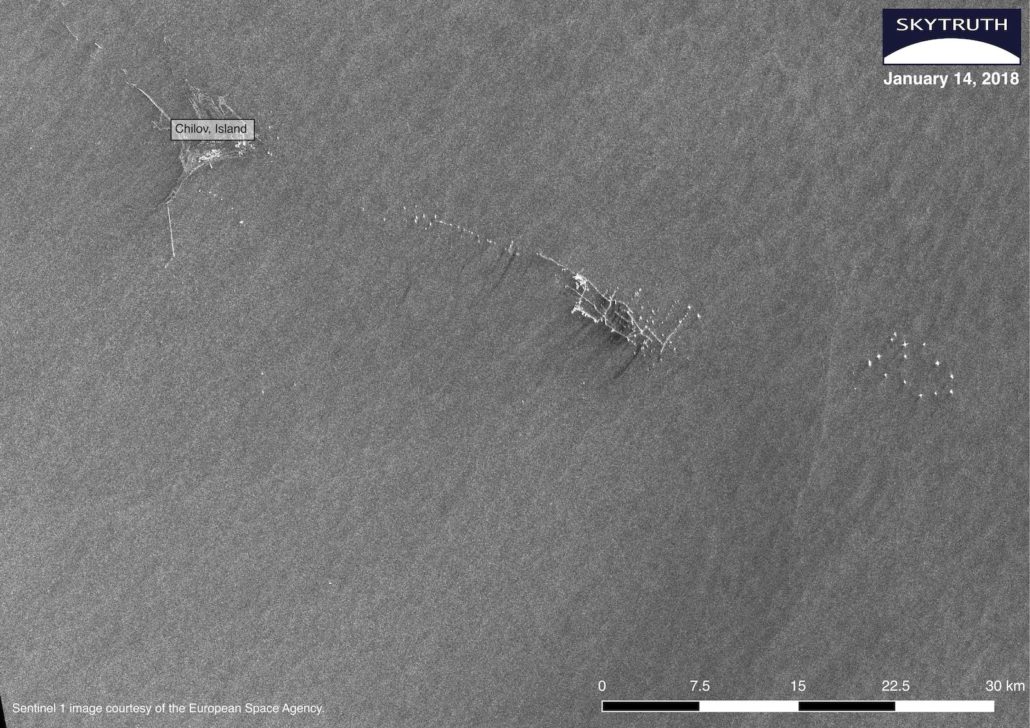 Wind speeds were very low (between 0-15 knots) on January 7th heading southward, allowing the oil to form slicks around the complex.

And on January 13th, they were between 20-30 knots also heading southward. Similar to the image from December 21st, the high wind speeds may have contributed to dispersing the oil. 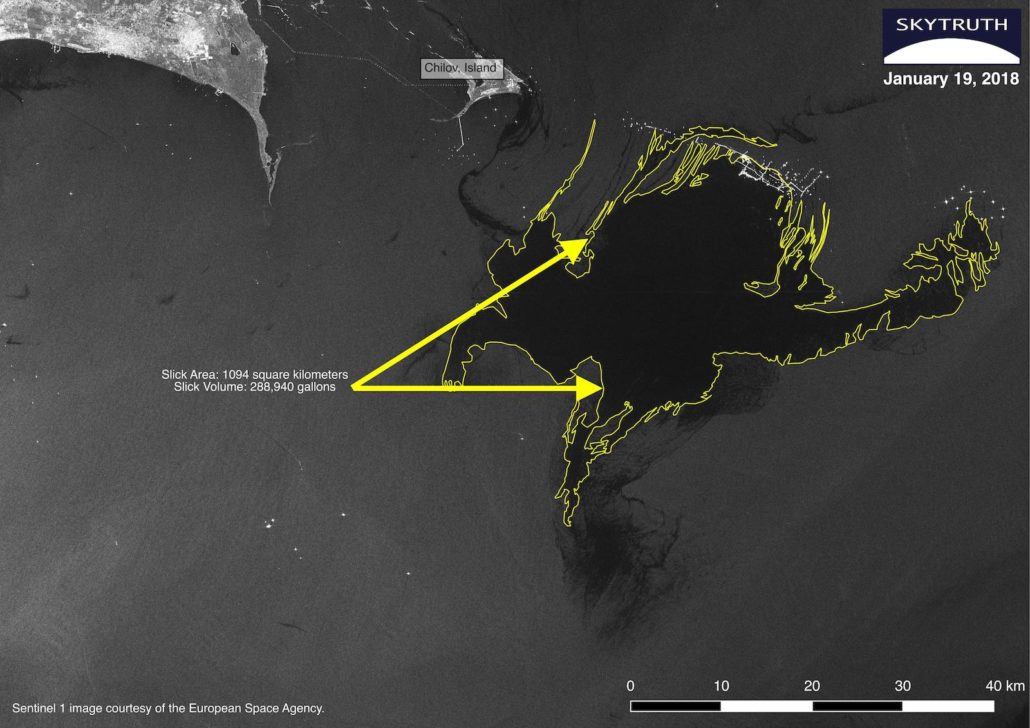 Above: The most recent Sentinel 1 image collected on January 19, 2018 reveals a massive oil slick emanating from the Oil Rocks complex, covering an area of 1094 square kilometers and containing at least 288,940 gallons of oil.

For context, 50,000 gallons of oil leaked from the SOCAR#10 platform during a fatal fire in 2015 mentioned above. And this massive Azerbaijani complex has a consistent leaky history on satellite imagery. Azerbaijan, Iran, Kazakhstan, Russia and Turkmenistan, the five countries surrounding the Caspian, all have efforts to tap into the Sea’s 44 billion barrel reserve. But this most recent satellite image from January 19th suggests a troubling future for the environment of the Caspian Sea.

What We Can See, In Heat Maps

The Search for Sanchi
Scroll to top