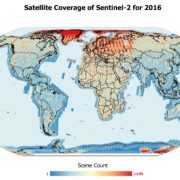 Here at SkyTruth, we depend on our friends at the European Space Agency (ESA), NASA and the U.S. Geological Survey (USGS) for their support in providing access to data and images from their fleets of government-operated satellites.

The Sentinel missions are pairs of satellites that are part of the Copernicus program at ESA. Sentinel 1 is of particular use to us for offshore oil pollution monitoring as the radar sensor it carries can penetrate cloud cover and highlight oil slicks against water. The optical-infrared imaging system on Sentinel 2 covers a wide range of spectral bands that we can process to create a variety of true-color and false-color images, which we use to study environmental issues like drilling, mining, and deforestation.

Many folks assume these Earth-Observing satellites are continually collecting images as they orbit overhead, but for most systems that is not the case. Much of the time the sensors are turned off to save power, to conserve onboard storage, because of limited communications bandwidth, or because the operators just aren’t interested in covering large areas where there isn’t much demand for imagery (far out at sea, or over vast deserts, for example).  We thought it would be interesting and useful to analyze the archives of imagery collected by these systems, and map where they’ve taken images, to get a sense for how frequently they are covering various parts of the planet.

The heat maps below show the locations of all the images collected by Sentinels 1 and 2 since they became active, and for a recent calendar year (2016). As you can see, the distribution of images is not at all uniform, with a strong bias toward covering Europe and the Arctic. Most of the ocean doesn’t get imaged at all. Please note that “scene count” means the image count at any particular point on the map. The U.S. Geological Survey (USGS) manages the images produced by NASA-built satellites in the Landsat program which has been imaging the Earth since 1972, much longer than any other civilian satellite imaging program. Currently, only Landsat 7 and 8 are in operation (with Landsat 9 planned for 2020) and, similar to Sentinel 2; they provide us with instrumental data collected across a range of spectral wavelengths which we can process into color images. Like the Sentinel satellites, the Landsat archives have sparse coverage in the ocean. While there is some pro-northern hemisphere bias, the operators of Landsat 8 have made a concerted effort to distribute the collection of imagery more evenly over all of the Earth’s land masses, with the exception of a few large areas that are chronically impaired by heavy haze, dust, smog, or cloud cover. Can you pick them out? 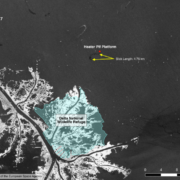 Last week, the Trump Administration proposed to open up nearly all Federal waters for oil and gas drilling, reversing decades-long protection of areas in the Atlantic, Pacific and Arctic Oceans and in the eastern Gulf of Mexico.

On December 23rd, the European Space Agency’s Sentinel 1 satellite collected an image of the Heater Plf platform which appears to be leaking oil in the Gulf of Mexico. The Heater Plf is located approximately 13 kilometers north of the Delta National Wildlife Refuge in the Mississippi Delta. Based on our conservative analysis, the slick detected on this image holds at least 220 gallons of oil. 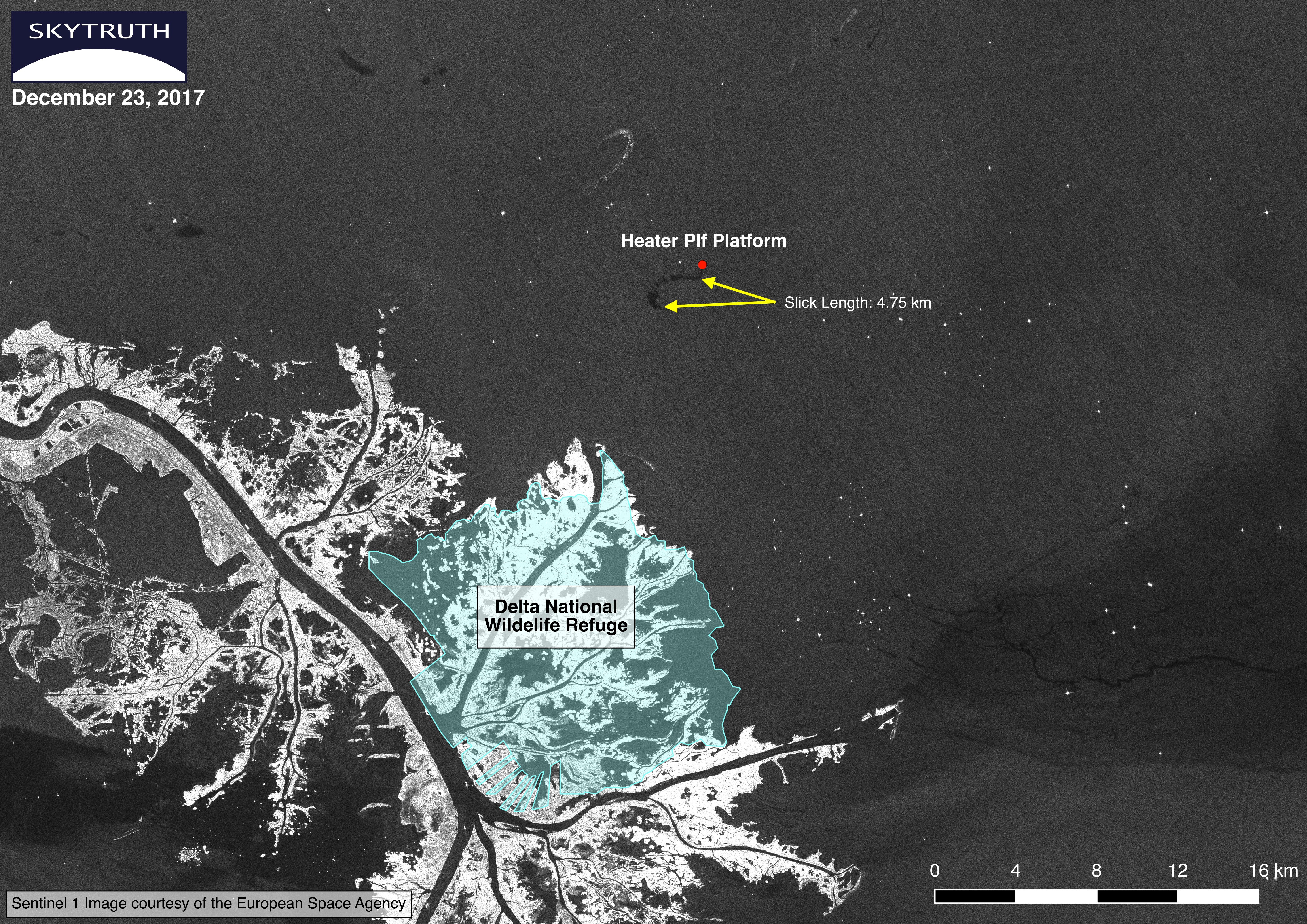 Sentinel 1 radar satellite image showing small slick in the Gulf of Mexico on December 23, 2017, indicating an apparent leak or spill from an oil platform. Image courtesy of the European Space Agency (ESA).

The image above reveals a small slick indicating a minor spill. But it’s the latest illustration of a much larger problem that doesn’t get much attention: the steady drumbeat of leaks and spills that accompany offshore drilling. For more examples illustrating this stealthy issue, see our analysis calculating the volume of the ongoing Taylor leak, our map of 10,000 spills since the BP spill and our work with the Gulf Monitoring Consortium.

This proposal to open Federal waters comes hand-in-hand with an announcement made last week, in which the Administration proposed reducing safety regulations on oil and gas drilling in the outer continental shelf. Currently, only the coastal waters of Texas, Louisiana, Mississippi, and Alabama in the Gulf of Mexico can be leased for drilling. These proposed reductions nullify safety rules which were put in place after the fatal and costly BP / Deepwater Horizon disaster of 2010.

The Heater Plf platform is owned by New Century Exploration LLC, and according to information provided by the Bureau of Ocean Energy Management (BOEM) the platform is no longer producing oil but has not been removed. In this 2014 legal brief, New Century and Champion Exploration LLC state that the new requirements under the Outer Continental Shelf Lands Act made it “infeasible” for them to prove their financial capability to handle oil spill preparedness. After the Deepwater Horizon spill, drilling companies were required to estimate the cost to clean up a “worst-case” scenario. New Century could not demonstrate they had the $1.8 billion required to clean up a worst-case spill, so they ceased activity at this site.

With the administration pushing to open new areas to drilling, it seems reckless to be walking back the safety rules put in place to help prevent the next catastrophic oil spill. More than seven years later, the Gulf is still feeling the effects of the largest accidental oil spill in history, while the drilling industry argues these regulations are burdensome to stakeholders and unnecessary. Can we afford to relax our safety standards regarding oil and gas drilling? Can the Gulf of Mexico survive another worst-case scenario like the Deepwater Horizon spill? Can we risk these disasters in the Gulf and elsewhere? Do we want the onus of recovery from these incidents to be shouldered by the taxpayers?

It’s an essential part of our democracy to voice your opinion about decisions that jeopardize public safety and the health of our public lands and waters. Submit your comment on the proposed rollback of the offshore drilling safety rules to the Federal Register by January 29, 2018.