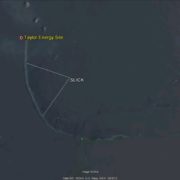 With President Trump preparing to open the Atlantic coastline to offshore drilling, we thought it would be a good time to revisit the cautionary tale of Site 23051 — Taylor Energy’s 13-year old continuous oil leak in the Gulf of Mexico.

We’ve estimated the cumulative amount of oil that has leaked from the Taylor Energy site since 2004, finding:

The Taylor Energy site perfectly captures the dysfunction of offshore oil development: In 2004, an underwater mudslide caused by Hurricane Ivan toppled one of the company’s platforms and buried the damaged wells attached to it on the seafloor.  Reports of oil on the surface at the site of the wreckage followed shortly after and a secretive clean-up effort ensued.

In 2008, after several failed attempts to stop the leaks and Taylor Energy’s decision to sell off all of its income-generating oil and gas assets in the Gulf, federal regulators ordered the company to post a $666.3 million security bond to ensure there was enough money to plug the wells and clean up remaining pollution.

In  2010 and 2011, Taylor Energy used a leased drill rig called the Ocean Saratoga to slowly find and plug some of the damaged wells (only 9 of the 25 wells at the site have been plugged).  Additionally, three underwater containment domes and an underwater collection and containment system were put in place at the wellhead area to try and capture any remaining oil.

Taylor Energy’s next step was to sue the government to try and recover more than $400 million from the trust they had set up previously.  The lawsuit is in limbo amid negotiations over the company’s remaining responsibility and the feasibility of further clean-up. Documents filed by the Justice Department on December 15th revealed new evidence of two plumes of oil and gas resulting in an “ongoing oil release,” bringing some renewed hope Taylor Energy will be held accountable for its mess.

SkyTruth became aware of the chronic leak from the Taylor Energy site in 2010 while analyzing satellite imagery of the BP / Deepwater Horizon disaster.  We’ve reported on slicks coming from the Taylor Energy site dozens of times in the years since, and in 2012 we released a cumulative spill report estimating that between 300,000 and 1.4 million gallons of oil had leaked from the site since 2004.  But with offshore drilling in the Atlantic looming once again, we thought now would be a good time to revisit those calculations and reconsider the risks that offshore drilling poses for coastal communities.

Our initial report estimated the cumulative amount of oil that had leaked from the Taylor Energy site over the period 2004-2011. We’ve updated those calculations to include years 2012-2017, finding that:

Our 2017 update uses the same methods outlined in our 2012 cumulative spill report. Our update analyzes the information contained in 2,719 public pollution reports filed with the National Response Center. Most reports were likely filed by Taylor Energy or their contractors covering 2,275 out of 4,852 days (just 47%) from the first report of oil at the site on September 17, 2004, through December 12, 2017.  We computed an ‘estimated average daily slick extent,’ and from that, we derived an ‘estimated average daily flow rate’ for each calendar year since the spill began.  Multiply the daily flow rate by the number of days the site has been leaking, and you have a rough estimate of the cumulative volume of the spill. For more on the methods, see our original report.  The data and analysis are accessible here.

In addition to our reliance on the accuracy of the pollution reports submitted by Taylor Energy, there are two assumptions we used to compute the average daily flow rate:

For average thickness, we used our conservative standard of 1 micron (1 millionth of a meter); we also computed everything using an even more conservative estimate of 0.5 microns to reflect the possibility that this slick is thinner than most.  For degradation half-life, we assumed that one half of a given amount of a thin slick of oil on the surface of the ocean would degrade in 3-7 days. We believe this range is a very conservative assumption because the longer the assumed lifetime of oil on the surface of the water, the lower the implied daily flow rate will be.

Combining all our data on slick extent with the high and low values for each of the key assumptions, we get four values for estimated cumulative oil spilled:

There is another potentially troubling trend in the data: since 2015, the average daily reported sheen extent has been significantly larger than in the past, while the number of pollution reports submitted to the NRC has come down.

On the one hand, these numbers could be the result of more diligent and accurate measurements made during routine monitoring and overflights, spurred in part by the public scrutiny this chronic leak has come under due to the work of SkyTruth and our partners in the Gulf Monitoring Consortium.  On the other hand, they could be the result of some qualitative change on the seafloor, in the damaged wells, or in the subsea reservoir that is allowing larger amounts of oil to leak out into the Gulf.

The slight decrease in average reported sheen size over the past three years is somewhat encouraging: if the significant jump in 2015 was indeed due to more accurate reporting by Taylor Energy, then this recent downward trend could indicate the leaks are finally slowing.  But we are hampered by our dependence on observations and reports submitted by the responsible party, Taylor Energy.  These reports have been proven inaccurate, systematically underestimating the size of the slick by more than an order of magnitude compared with independent measurements based on direct observation of the slick on satellite imagery.  Direct, regular measurement and observation of the leak by a neutral party is crucial to understanding what is happening and predicting the likely future at this site. For this reason, we will continue our monitoring work.

A Look at the Risks of Offshore Drilling as Trump Proposes Largest Leasing Expansion...
Scroll to top