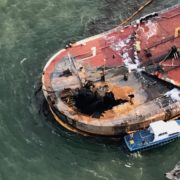 Around 4:30 am on October 20, a barge filled with nearly 5-½ million gallons of crude oil exploded off the coast of Port Aransas, Texas. Two crewmen lost their lives, and although the cargo holds reportedly were not breached, the crippled vessel began leaking oil into the Gulf. The U.S. Coast Guard reported a spill roughly two miles long and a quarter mile wide, and response crews were seen setting up oil booms by late afternoon. By the end of the weekend, more than 6,000 feet of containment booms had been placed to protect essential habitat areas along Mustang and North Padre islands. Satellite imagery from Planet shows the spill at a resolution of three meters, just two days after the explosion. The spill spread out off Port Aransas and started drifting slowly south toward Mustang Island State Park and Padre Island National Seashore – critical wintering habitat for migratory birds including the red knot and the piping plover, both listed as threatened under the U.S. Endangered Species Act.

The Coast Guard issued a news release late on October 25 indicating the barge had been moved to shore. Beach cleanup teams continued to work on Mustang and North Padre islands, where more than 70 cubic yards of “oily solids” have been removed. Some shorebirds have been seen with oil on them, but wildlife teams have had difficulty catching and cleaning any of them. If oiled wildlife is rescued, they’re likely to go to the University of Texas Marine Science Institute’s Amos Rehabilitation Keep (ARK) for treatment.

Read our Annual Report for an Overview of Our Environmental Impact

Interactive Map Detects Gas Flaring Volume Worldwide
Scroll to top
SkyTruth and/or its third party tools use cookies to monitor traffic in the aggregate on our websites and applications and to improve user experience. If you continue browsing, we'll assume you agree to the use of cookies. You can change your cookie settings at any time in your browser settings. Find out more in our privacy policy.