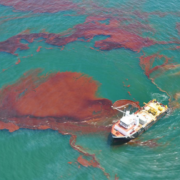 We’ve embarked on an ambitious new project with the help of our stellar team of summer interns (Brady Burker, Flynn Robinson and Brian Wong). We set out to systematically identify and monitor ‘hot spots’ of oil pollution in the world’s oceans.

You can find the report here.

Free satellite imagery is becoming increasingly useful for systematically detecting and monitoring oil pollution in the world’s oceans.  Building from the methods and case studies outlined herein, our goal is to develop a semi-automated daily ocean monitoring platform.  This imagery will remain a core resource for this work. We will also seek to leverage high temporal and spatial resolution commercial imagery resources in order to create a clearer picture of the sources, causes and consequences of oil pollution at sea, and to empower and engage environmental advocates and concerned citizens to protect their oceans and coasts.

Image credit: A “vessel of opportunity” skims oil spilled after the Deepwater Horizon/BP well blowout in the Gulf of Mexico in April 2010. (NOAA Office of Response and Restoration)