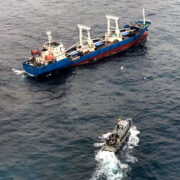 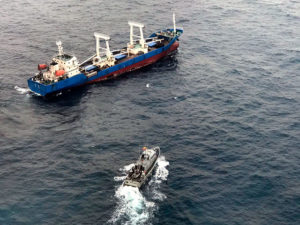 The reefer Fu Yuan Yu Leng 999 is intercepted by the Ecuadorian Navy on August 13, 2017. Image accessed at: Armada del Ecuador.

Today the government of Ecuador took a strong environmental stance with its sentence for the Fu Yuan Yu Leng 999, a Chinese refrigerated cargo ship (reefer) caught in the Galapagos with the remains of more than 6,000 sharks, including endangered hammerheads. Catching or transporting sharks within the Galapagos Reserve is illegal. The incident set off widespread protests in the Galapagos and in the cities of Quito and Guayaquil. The large fine, coupled with a prison sentence of four years for the vessel’s captain shows the determination of Ecuadorians to defend this unique marine environment.

Along with our partners at Global Fishing Watch, we have taken a detailed look at the past activity of this vessel and found the reefer rendezvoused with a fleet of Chinese longliners in the week just before the vessel’s detention.

According to news reports, a chance sighting of a Chinese cargo vessel within the Galapagos Marine Reserve on Saturday, August 12th, led to a chase and the eventual detention of the vessel by the Ecuadorean Navy the following day. During the hearings, two vessels were named as providing the catch, reported as the Taiwanese vessels Hai Fang 301 and Hai Fang 302. The catch transshipment reportedly occurred between August 5th and 7th more than a thousand miles west of the Galapagos.

Our AIS tracking data does confirm vessel rendezvous on the dates reported but not with the vessels named. The Fu Yuan Yu Leng 999 is seen departing Fuzhou on the Chinese coast on July 7th and then transiting directly across the Pacific toward Ecuador. On August 5th at a remote location in the Eastern Pacific 1700 miles west of the Galapagos, the Fu Yuan Yu Leng 999 stopped and spent the next three days moving at a slow speed. 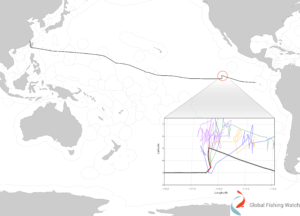 Details of rendezvous between the Fu Yuan Yu Leng 999 and the four Fu Yuan Yu longliners. Click on the listed vessel names above for the individual tracks. (image by Global Fishing Watch, August , 2017) 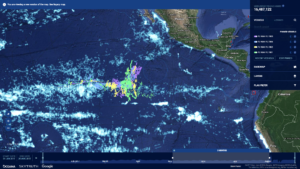 The four Fu Yuan Yu longliners were fishing on the high seas in the Eastern Pacific for the three months prior to rendezvousing with the Fu Yuan Yu Leng 999. Click to view vessel tracks in Global Fishing Watch.

The practice of at sea transshipment of catch between fishing vessels and refrigerated cargo ships is common but can result in the mixing of fish caught legally and illegally. Transshipment also enables vessel operators to keep their crew at sea for many months on end where they may face abusive labor conditions or even slavery. Transshipments on the high seas are regulated by Regional Fisheries Management Organizations (RFMO’s).

The Fu Yuan Yu Leng 999 can be seen rendezvousing with the Chinese longline vessels within the area of the eastern Pacific regulated by the Inter-American Tropical Tuna Commission (IATTC). While the four Chinese longliners are currently authorized to fish by the IATTC, a recent publication of a list of carrier vessels authorized by the IATTC does not include the Fu Yuan Yu Leng 999.

Following the track of the Fu Yuan Yu Leng 999, the vessel reached the edge of the Galapagos EEZ on August 12th. At this point, the track of the vessel is broken up by some AIS transmission errors resulting in several extended periods where no location for the vessel came through. While this seemed suspicious, it was possible to check the length of these gaps in the vessel’s track and determine the vessel maintained an average speed of around 10 knots during the hours when the vessel was not trackable. This 10-knot speed matches the vessel’s normal transit speed, and for this reason, it seems unlikely that the Fu Yuan Yu Leng 999 could have stopped to transship with any local vessels in the vicinity of the Galapagos. 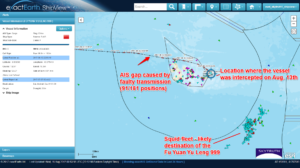 The Fu Yuan Yu Leng 999 entered the Galapagos EEZ area on August 12th. Several long gaps occur due to faulty AIS transsmision but our analysis shows that the vessel likely maintained a normal transit speed during these gaps. The vessel was then intercepted on the 13th. To the southeast more than one hundred Chinese squid vessels cluster near the EEZ boundary. This fleet has moved north from typical fishing grounds at the edge of Peru’s EEZ. Includes material © 2017 exactEarth Ltd. All Rights Reserved.

Checking the Fu Yuan Yu Leng 999’s track over the past few years shows the vessel was operating in a few locations where suspicious or unregulated fishing activity has been documented. These locations include the northwest Indian Ocean with an unregulated squid fleet through 2016 as documented in a report by Fish-i Africa and East Timor where Chinese vessels expelled from Indonesia have relocated.

Given the history of the Fu Yuan Yu Leng 999, we are encouraged to see the vessel held accountable for its crimes by the Ecuadorian authorities. Our analysis shows four Fu Yuan Yu longliners are likely the source of the catch confiscated from the Fu Yuan Yu Leng 999. We hope these vessels will also be sanctioned for illegally transferring catch and regulators will take further action to monitor and restrict transshipment at-sea.

Read more details on this story on the blog of our partner Global Fishing Watch.

One-Third of U.S. Oil and Gas Reserves are Located in Harvey’s Path