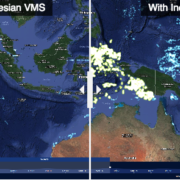 Today, a big announcement was made at The Ocean Conference at the United Nations: the Republic of Indonesia has made its fishing activity data public by allowing it to be published in Global Fishing Watch. This is an unprecedented move — governments that require vessels to use their proprietary vessel management systems (VMS) typically restrict access to the system; data is made available to government and enforcement agencies but not the general public. But Susi Pudjiastuti, the head of Indonesia’s Ministry of Marine Affairs and Fisheries (the Kementerian Kelautan dan Perikanan RI, or KKP, for short), believes that making government fisheries data visible to the public is a powerful way to engage civil society in the fight against illegal, unreported and unregulated (IUU) fishing.

Global Fishing Watch, a joint project of SkyTruth, Oceana and Google, relies on publicly-broadcast Automatic Identification System (AIS) signals, rarely used by vessels in Indonesian waters. AIS tends to be used by larger vessels — typically vessels greater than 300 gross tonnage or longer than 15 meters. Much of the fishing in Indonesian waters is carried out on smaller vessels. If you take a look at Global Fishing Watch with and without Indonesia’s VMS data in Indonesian waters, it’s astonishing to see how much fishing activity is added when the VMS data of the second largest fishing nation in the world is included. Indonesia requires all vessels greater than 30 gross tonnage to use its VMS:

Minister Susi is calling for other nations to follow her lead, and the Global Fishing Watch partners are committing to process, for free, VMS data from any country that agrees to make its data public through Global Fishing Watch, for free. Her decision is already making a difference — yesterday at this conference, the Republic of Peru announced (Spanish version) that it too will commit its VMS data to Global Fishing Watch in the near future. We hope that other countries will realize the advantages of transparency and soon follow suit.

Today’s announcement is the culmination of two years of behind-the-scenes work with the KKP. In 2015, during a visit to Google headquarters, Minister Susi saw a demonstration of Global Fishing Watch given by Brian Sullivan of Google Oceans & Earth Outreach and SkyTruth’s Paul Woods, and she expressed interest in having a similar tool that her Ministry could use in fighting IUU fishing. Paul said that he thought such a collaboration might be possible, but that because AIS is generally not used in Indonesian waters, it would be necessary for the KKP to make its own VMS data available to GFW in order for there to be any data to work with. Remarkably, Minister Susi agreed.

Since then, SkyTruth team members have made several trips back and forth to Indonesia to work with KKP staff — processing the data and applying algorithms already used for AIS to the VMS data, and sharing insights about the data with KKP staff that they can use to identify illegal activity and manage Indonesia’s globally important fisheries more effectively. Meetings via Skype and Google Hangouts had to be scheduled early in the morning and late at night so that they could span the vast number of time zones occupied by team members in Europe, the Americas and Southeast Asia. SkyTruth hired Imam Prakoso in Jakarta to meet regularly with the KKP, and recruited Aaron Roan, a former Google engineer, to work with the data and the algorithms.

Starting today, Indonesian VMS data will be part of Global Fishing Watch and available to anyone who wants to view it; the VMS data will be updated daily. In addition, the KKP has been given its own mapping tool to use for monitoring fishing in Indonesian waters. The Indonesian VMS fishing activity data is shown on a separate layer, so that it can be turned on and off as the user wishes.

We’d like to give a shout out to the people and organizations that made today’s announcement possible: to the teams at SkyTruth and Global Fishing Watch, to Global Fishing Watch partners Google and Oceana, and to Minister Susi and her staff at the KKP. SkyTruth’s participation in this major effort is made possible by grants from the Walton Family Foundation and the David and Lucile Packard Foundation.

Bilge Dumping Proving to be a Persistent Issue for the UAE