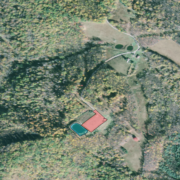 During Phase 1 of our FrackFinder WV project, we focused on identifying and delineating wellpads (drilling sites) and drilling-related fluid impoundments across West Virginia that have been built to accommodate the recent boom in drilling and fracking to produce natural gas from the Marcellus and Utica Shales.  This data has been provided to our partners, researchers at Downstream Strategies and the University of California – Berkeley, who are studying the human health impacts of living near modern drilling and fracking operations.

This slider shows an area near Wilsontown, WV before and after drilling took place (the wellpad is highlighted in red, and an impoundment is shown in blue):

We thought we’d assess the direct environmental impact by measuring the change in the landscape resulting from all this construction activity.  Here’s the breakdown of how much land was converted to industrial use between 2007 and 2014 as a result of fracking, categorized by the type of land cover that existed in the area before the wellpads and impoundments were built. The land cover data is from the National Land Cover Database, which is derived from Landsat imagery. 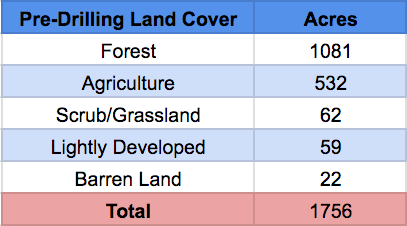 It appears that the NLCD is registering this land conversion, as seen in the three images below which show the same area displayed in the slider. A wellpad first appeared on this site in 2011, which was when the NLCD was last updated using moderate-resolution satellite imagery, and it is identifying the drilling site as “barren” land. It is worth noting that of the 1,081 acres of forest cleared for drilling infrastructure, 27.8 were cleared in the Monongahela National Forest. 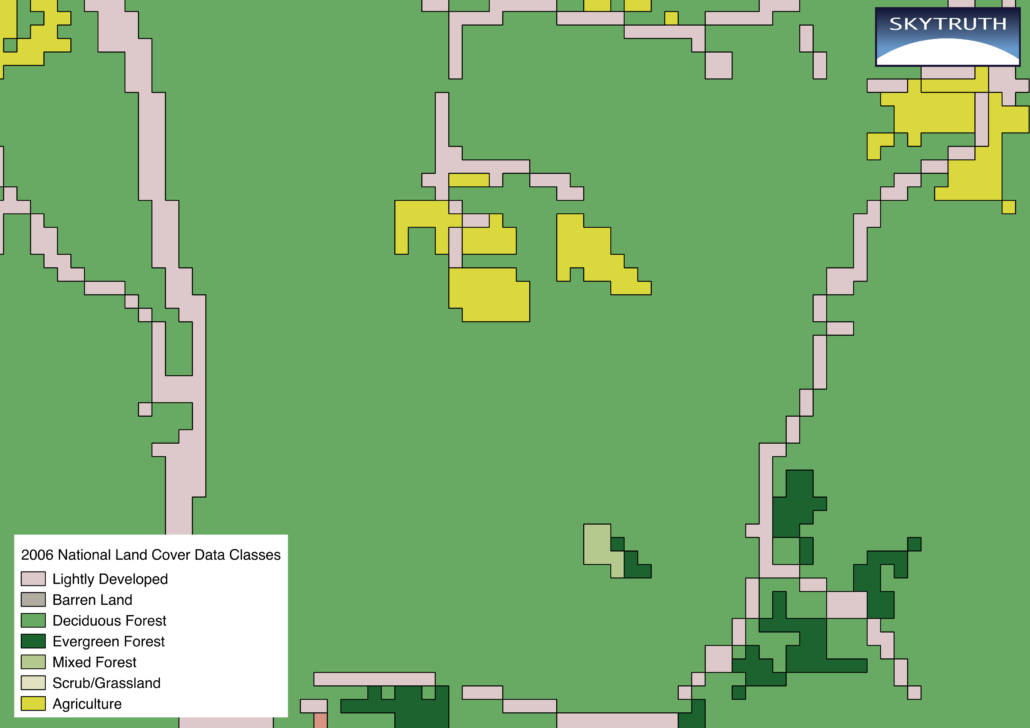 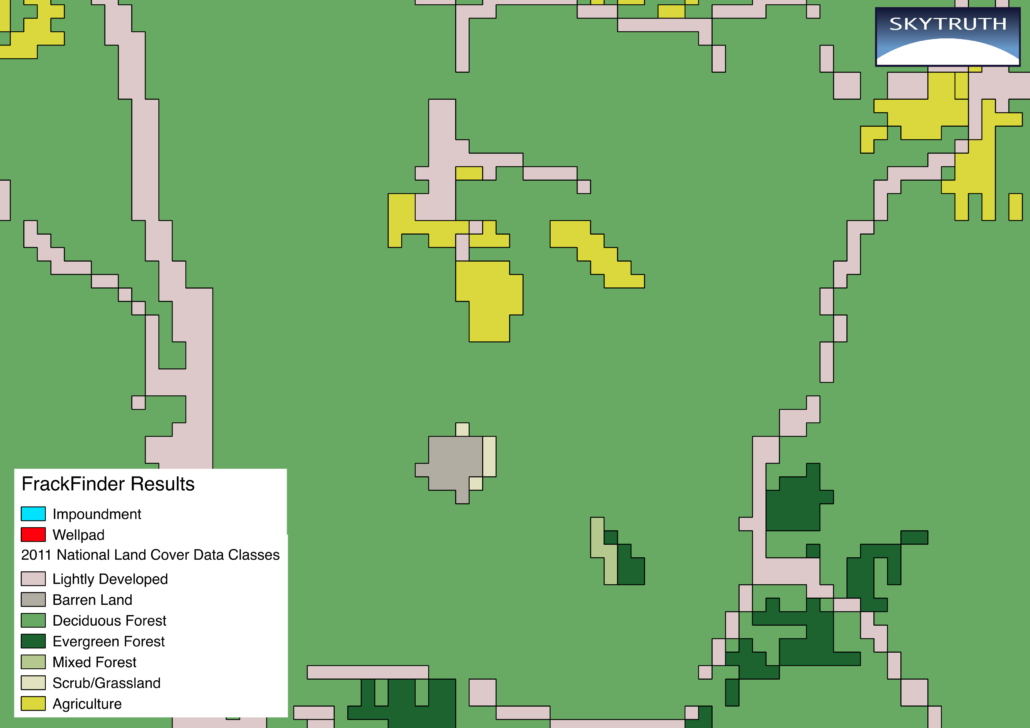 The 2011 update of the National Land Cover Dataset, detected a fracking wellpad in the center of this image and registered it as Barren Land. See the next image when the outline of the wellpad is displayed. 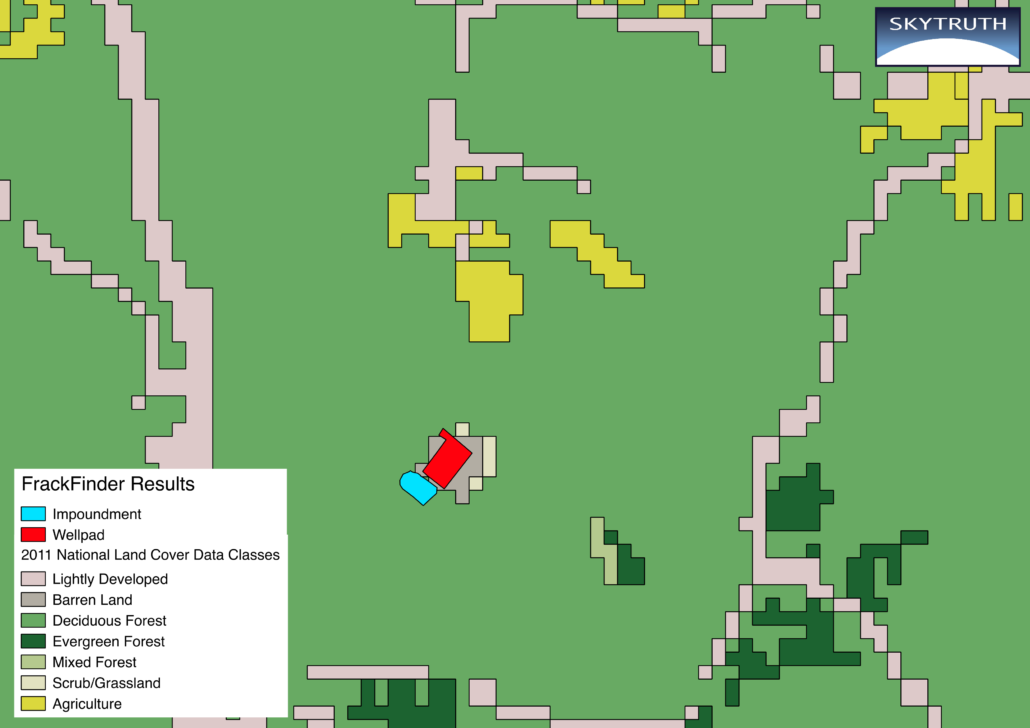 We find that 1,756 acres of land in West Virginia was converted to wellpads (averaging 2.3 acres in size) and impoundments (averaging 0.8 acres in size) from 2007 to 2014. That is an area 1/4 the size of  Morgantown, WV and is 7 times larger than the town of Shepherdstown (where SkyTruth is based). This is a very conservative starting point for measuring the true drilling “footprint” because it doesn’t capture the total land area disturbed to construct the pads and facilitate drilling:  tree clearing, site excavation and grading to accommodate heavy equipment and provide drainage control, access roads and utility / pipeline corridors, and associated facilities like compressor stations and storage facilities.  Later this year we may ask you to help us delineate this larger halo of direct land disturbance related to drilling, which we speculate could be 2-3 times larger than the footprint of the wellpads and impoundments alone.

In the meantime we are gearing up for the launch of Phase 2 of FrackFinder WV. During this stage of the project, citizen volunteers (that’s you!) will assist SkyTruth in creating a dataset of homes which lie within 1/2 mile of the wellpads we identified in Phase 1, data that our partners think will be very useful for public health research.

So be sure to keep an eye out for project updates and calls for volunteers!  If you sign up on our Volunteer page, you’ll get an email from us when the next FrackFinder project is up and running.