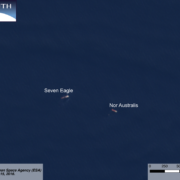 Last week the Guardian reported on an oil spill on Australia’s North West Shelf that was detected in April 2016 but had not been made public until a performance report was recently issued by Australia’s National Offshore Petroleum Safety and Environmental Management Authority (NOPSEMA). Despite the spill being estimated to have gone on for two months and released 10,500 liters of oil the Guardian reports that NOPSEMA declined to reveal exactly where the spill had occurred or which company was responsible.

We had a look at operations currently in the area and identified a vessel which fits the description in the article. This is the FPSO OKHA operated by Woodside Energy. Our identification has now been confirmed as Woodside has admitted responsibility and the OKHA has been named as operating at the site.

Though this is being reported as the largest offshore leak in Australian waters last year Woodside states that the spill had no lasting impact on the environment. 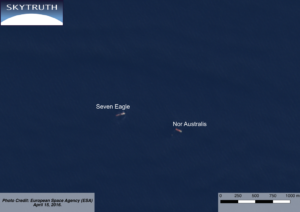 On April 15, 2016 two likely response vessels appeared at the leak site. To the west is the dive support vessel Seven Eagle. About 900 meters to the east is the Nor Australis, an offshore supply vessel equipped with a ROV for underwater surveying.

We have examined imagery of the site from April 15th of last year, that is shortly before the OKHA returned to this location and around the time the leak was apparently first detected. Two response vessels appear at the leak site. The Nor Australis is an offshore supply ship equipped with a ROV which probably detected the leak. The dive support vessel Seven Eagle is a short distance to the west. We don’t see any signs of a slick in this image or in several others we checked. However it is still of concern that the report of an incident like this would be kept from the public for more than a year.