Once again, the federal government is proposing that we expand offshore drilling to new areas in US waters.  Today, President Trump signed an executive order directing the Department of the Interior, which manages our public lands and waters, to review the Obama administration rule that deferred oil and gas leasing along the Atlantic coast and in the Arctic Ocean off Alaska.  People who could be affected by new drilling in those areas should consider that it’s not just the risk of the occasional major disaster they would be facing; it’s the chronic, day-to-day pollution accompanying offshore oil development that is systematically under-reported by industry and the government, the “death by 1,000 cuts” that is so easy to ignore.

Case in point: check out last night’s slick at the site of the chronic Taylor Energy oil spill in the Gulf: 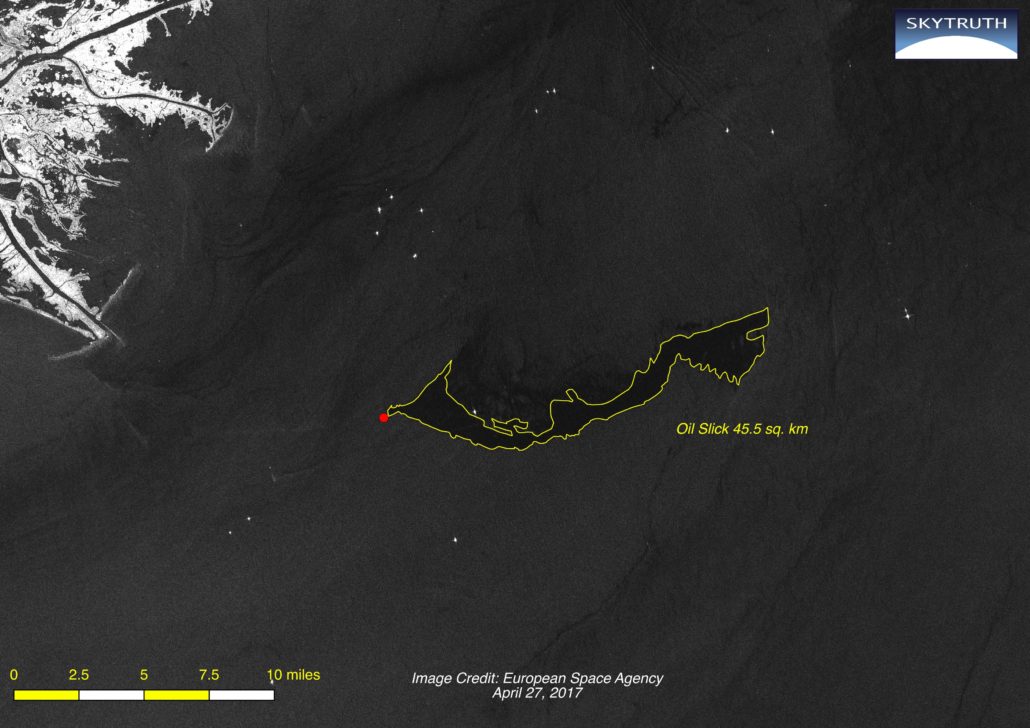 Sentinel-1 radar satellite image showing oil slick caused by a chronic leak of oil from the seafloor at the Taylor Energy site, where an oil platform was destroyed by a hurricane in 2004.  Image acquired 4/27/2017 at about 7pm local time.

This Sentinel-1 image taken on April 27, 2017 shows an oil slick covering an area of 45.5 square kilometers (km2). Our calculations assume that oil slicks observable on satellite imagery have an average thickness of at least 1 micron (one millionth of a meter), so each km2 contains at least 264 gallons of oil. Multiply that by the area of 45.5 km2 and the Taylor slick shown in this image contains at least 12,012 gallons of oil.

This site has been leaking oil continuously into the Gulf since Hurricane Ivan came through and knocked over the Taylor Energy oil platform in September.  That’s September, 2004.  You can review the history of this site and see the hundreds of spill reports received and tracked on our Taylor Chronology page here. Until something is done to stop this leak, we’ll continue to monitor the site and keep you informed.

Transshipment in the Fishing Industry Getting a Critical Look