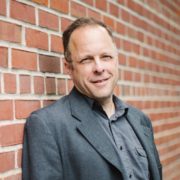 When Paul Woods moved to Shepherdstown, West Virginia, SkyTruth’s home base, he was looking to get away from the Washington, D.C. area where we had been consulting in the tech industry during the dot com boom. His goal had been to find a slower pace and a more soul-satisfying lifestyle than the world of maximizing profit margins through software development. Now, he’s setting off to help save the oceans by revolutionizing the way the fishing industry works.

As the Chief Technology Officer at SkyTruth, Paul was instrumental in bringing Global Fishing Watch into being. [You can read about that here] Now, the platform we developed for identifying and tracking every commercial fishing vessel on the oceans is spinning off into an independent non-profit organization with Paul at the helm. As the interim CEO of Global Fishing Watch, Paul will be guiding the new organization through the transition. While we’re still keeping him in the fold, we thought it was a good time to sit down for a brief reflection on his path, his time at SkyTruth and a look into what’s next.

It’s a small town, so I guess when you landed in Shepherdstown in 2001, it was only a matter of time before you and SkyTruth found each other. How did you get involved?

It’s true just about everybody in Shepherdstown knows SkyTruth. When I met John (SkyTruth President, John Amos), I was working with another company, but I did a few side projects for SkyTruth. I also joined the board as technology advisor. Then, as the other work was winding down and I was looking for the next thing, I realized I just got a lot more out of the SkyTruth stuff than I did out of creating products to maximize clicks or streamline business processes.

In 2010, when the Deepwater Horizon spill happened, I helped John set up a rapid response website. Of course the whole oil spill incident opened an opportunity for growth at SkyTruth, and I realized I could apply my skills in the stuff I really like doing directly to issues that made a real difference in the world. That kind of direct application to saving the environment is so much more satisfying than just writing a check or writing a letter to your congressman.

By 2013, I came on full time, and one of the first projects we did was SkyTruth Alerts, which is still in use today.

I’m sure it’s rewarding to see Global Fishing Watch mature into its own organization. Do you have any reflections to share as you look back at your time at SkyTruth?

Over the years I’ve been working on many different projects at SkyTruth that have been deeply rewarding to me. Now that one of those projects has gotten big enough that it requires all of my time and attention to keep it running, which is enormously exciting.

What are your hopes for the future:

Personally, I guess I’m always looking for the next thing. I’m a start-up guy. That’s what I do. It’s what I like to do, so I guess my hope is that there will be another Global Fishing Watch around the corner a few years from now —another project with the same great impact and the same great opportunity to make the world a better place, and I’ll get to be involved in it. There’s a good chance that project is in its infancy right now at SkyTruth.

If you could see any place in the world from space, where would it be?

Anyplace? Well, we have recently detected new planets only four-and-a-half light years away, and at least one of them potentially has liquid water on it. The surface of Proxima Centauri B. That’s my first answer.

Great answer. What about here on Earth. If you could aim the SkyTruth “eye” where would you aim?

What would be really fantastic to see from space would be the bottom of the ocean, the sea floor. Unfortunately we can’t do that right now, but I think that would be the place I’d want to see.

A Closeup Look at Leasing and Drilling: Allegheny County, Pennsylvania