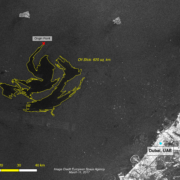 On March 14th we began investigating a report of suspected bilge dumping off the coast of Fujairah in the United Arab Emirates.

While we were unable to uncover any imagery of bilge dumping there, we did find some evidence of what appears to be a significant, ongoing oil spill in the Persian Gulf off the west coast of UAE. Based on patterns formed by what appear to be oil slicks, the spill appears to be originating as a leak emanating from a fixed point on the seafloor, such as a well or pipeline. Vessel tracking data indicated the presence of a jack-up drill rig near the suspected origin of the spill, and this suggests that something went wrong either in the course of drilling a new well, or during the workover of an existing well. 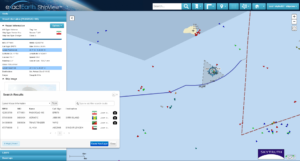 Vessel-tracking data from exactEarth, showing cluster of vessels (within the gray triangle) near suspected source of what appears to be a major oil spill in the Persian Gulf. One of these vessels, the Pasargad 100, is also known as the Liao He 300, an Iranian-flagged jackup drill rig.

The spill is visible on radar and optical satellite imagery from multiple dates, and the presence of multiple distinct patches of slick indicate that the spill may be occurring in pulses. Based on the total area which is covered by slicks we conservatively estimate that 88,241 gallons of oil are visible on this Sentinel 1 radar image taken March 8th: 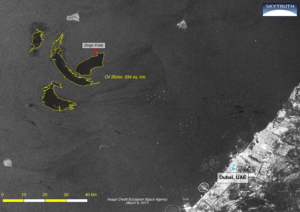 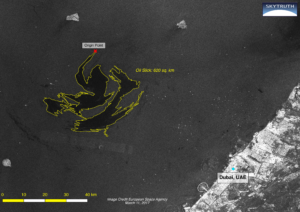 Our estimates are based on the assumption that, on average, the slicks we’re observing on satellite imagery are at least 1 micron (one one-millionth of a meter) thick. That means every square kilometer of slick hold 264 gallons of oil. We consider this a conservative assumption.

Landsat-8 satellite imagery from March 7, just one day before the first Sentinel radar image, doesn’t show anything unusual in this area, which suggests a sudden catastrophic spill. A Landsat-8 image from March 14 is partially obscured by haze but does appear to confirm the presence of a very large oil slick.

We will continue to monitor this site to determine if this is a continuing spill.

UPDATE 27 March 2017 – based on this tweet, we think these slicks were related to a spill in Iran’s Siri offshore oil field.  Possibly related to their attempt to revive 18 previously abandoned wells? 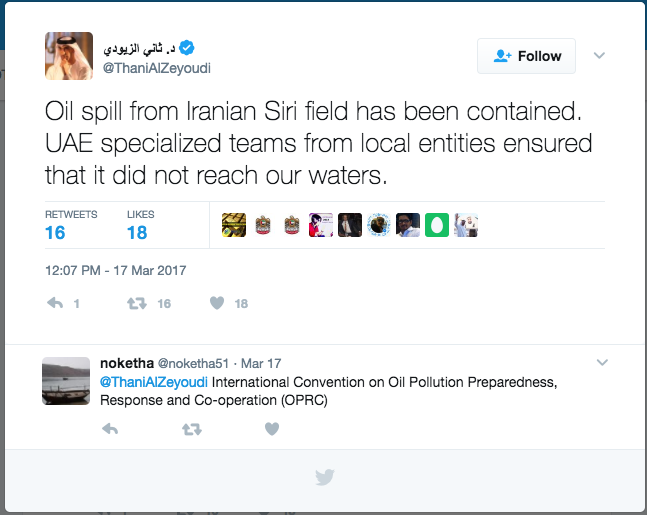 Here is another look at the March 11 radar image, with the EEZ boundaries between UAE and Iran superimposed. Note the disputed zone where EEZ boundaries are not agreed upon. Most of the slick appears to be in UAE’s waters on this date: 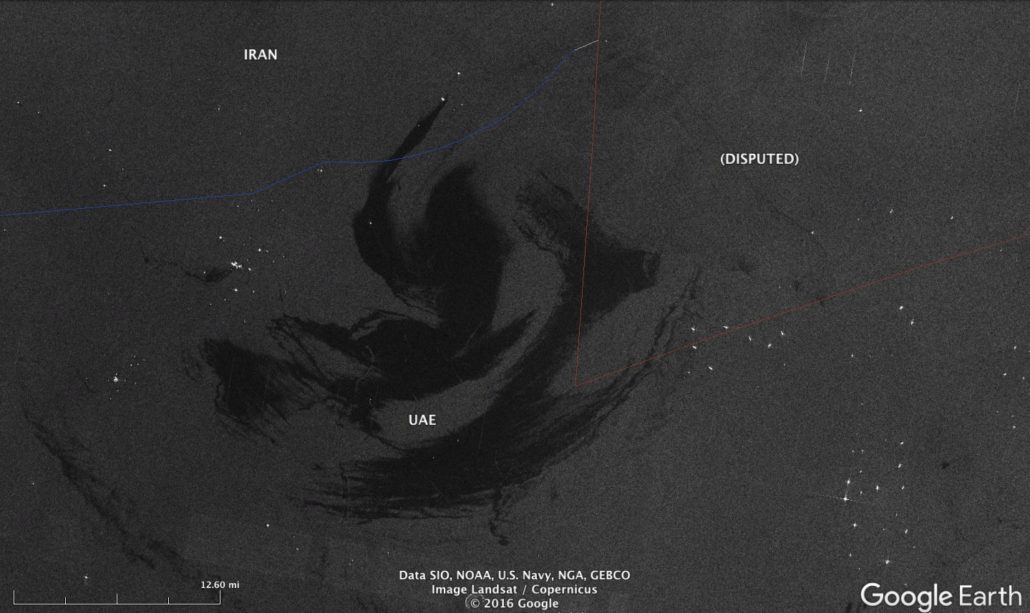