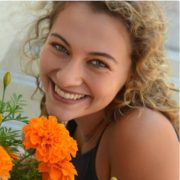 Hi, my name is Jerrilyn Goldberg.  Over the course of  two months last summer I worked as an intern at SkyTruth. In September I started my junior year at Carleton College in Northfield, Minnesota, majoring in environmental studies and physics. Over the course of my internship I contributed to SkyTruth’s Mountaintop Removal (MTR) research by creating a mask to block out rivers, roads, and urban areas that could be confused with mining activity by our analytical model. I also helped classify many of the ~1.1 million control points that allow us assess the accuracy of our MTR results. 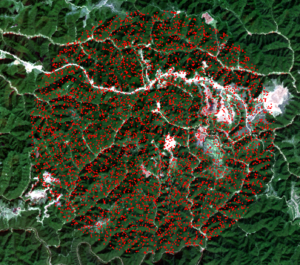 To analyze the accuracy of the MTR results we obtained through our Earth Engine analysis, we dropped 5,000 randomly distributed points at each of 10 sample areas for each year between 1984 and 2016. These points were manually classified as being `mine` (if it overlapped a user IDed mine location) or `non-mine` (if it overlapped anything other than a mine). A subset of those manually classified points were then used to assess the accuracy of the output from our Earth Engine analysis

In addition to the MTR project, I created a story map illustrating the development of Marcellus Shale gas drilling and hydraulic fracturing (fracking) in Pennsylvania, and discussing the environmental and public health consequences fracking is having on some rural Pennsylvania communities. Check it out here. Through my research for the story map, I learned about the hydraulic fracturing process. I also learned about many of the political and social complexities surrounding the fracking industry in Pennsylvania, including conflicts between economic and community interests. Our goal with this story map is to present an accessible and accurate narrative about the fracking industry in Pennsylvania, which begins with understanding what’s actually going on now. 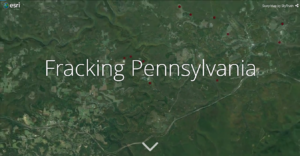 Click the image above to visit Jerrilyn’s interactive story map.

I started by learning about SkyTruth’s FrackFinder Pennsylvania data and methodology from the 2013 project. I read through our GitHub repository and figured out why the FrackFinder team chose their methodology and what the results represented. (While I was familiar with the general concept of the project, I did not know much about the specifics beforehand.) With this in mind, I set out to update the dataset with well pads built after 2013.

I quickly realized that this task presented many questions such as, which of the many state oil and gas datasets actually contained the information I sought. I selected the Spud Data, which contains all of the individual locations where operators have reported a drilling start-date for a permitted well. I filtered to include only unconventional horizontal wells drilling for natural gas and excluded those reported as ‘not drilled.’ To account for some missing drilling locations which I noticed while reviewing the latest Google base map imagery, I also download the Well Inventory Dataset which includes all permitted oil and gas wells along with their status. From here I filtered out all the spuds and wells not listed as drilled in 2014, 2015, or 2016 and joined the files. After joining the layers, I formed a well pad dataset by creating a 150 meter buffer around the wells, dissolving overlapping areas, then locating the centers of each buffer. This step effectively says ‘create a 150 m radius circle around each point, but when these overlap, clump them into one circle, then find the center of that new circle.’ Finally, I found all the buffers that overlapped with FrackFinder drilling locations from 2013 and earlier, and eliminated all of those centroids. 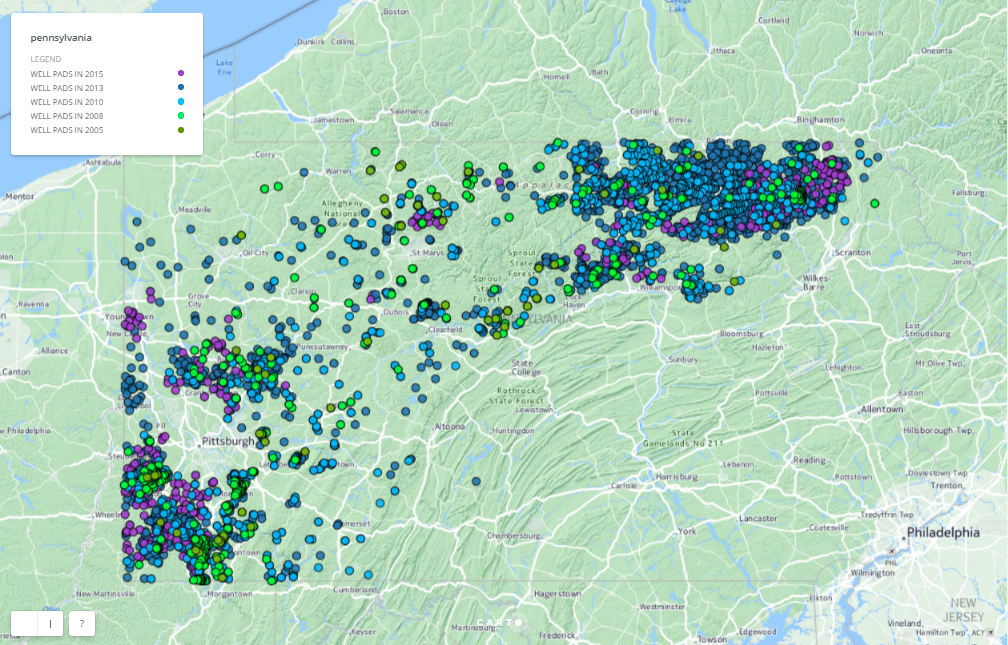 A quick note about the imagery: USDA collects high resolution aerial imagery as part of the National Agriculture Imagery Program (NAIP), which at the time of my project was last collected for Pennsylvania in 2015. While I worked hard to eliminate inaccurate points, I was unable to verify all of these with the existing NAIP imagery. That said, I found that the other points accurately represented the general well pad locations and thus chose to include the points for the first half of 2016, even though I obviously couldn’t verify the existence of those recent drilling locations on the mid-summer 2015 NAIP imagery.

At the same time I found The Nature Conservancy’s (TNC’s) 2010 Energy Impact Analysis, which looked at the predicted development of wind, shale gas, and wood fuel usage in Pennsylvania. Part of TNC’s study identified three construction scenarios for how many wells and well pads could be built in Pennsylvania by 2030. With an assumption that 60,000 new wells would be drilled between 2010 and 2030, the study predicted between 6000 and 15000 new well pads would be built to host those wells. Each scenario featured a different distance between pads and a different number of wells per pad (because that number stays constant at 60,000 new wells). I found some data from TNC’s study hidden on an old SkyTruth backup with help from Christian and David. With the FrackFinder data, my update, and the ‘informed scenarios’ in hand, I started trying to figure out an appropriate way to synthesize the three datasets, to identify which TNC drilling scenario best fits what is actually happening..

One roadblock in conducting a thorough analysis and comparison was that TNC’s research makes a quantitative prediction about the possible volume of infrastructure development instead of a more tangible spatial prediction. The study distributes the predicted numbers of new well pads across the counties of Pennsylvania, which overlay the region of Marcellus Shale with ideal conditions for hydraulic fracturing for natural gas. All of the included counties now contain at least one well pad. I did notice that since 2010, about 1/3 of the well pads estimated by the low impact scenario (6000 well pads) have already been constructed. If the rate of development between 2010 and 2016 remains constant, Pennsylvania will surpass TNC’s low impact scenario. 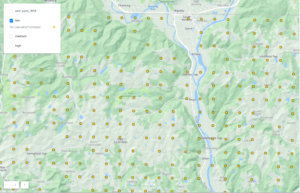 An example of The Nature Conservancy’s “low” impact scenario for fracking well construction across a section of Pennsylvania. 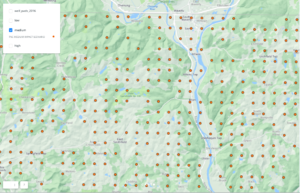 The Nature Conservancy’s medium impact scenario for future fracking well construction across a section of Pennsylvania. 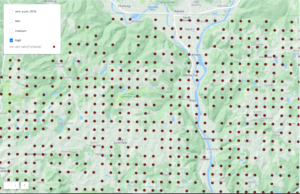 The Nature Conservancy’s high impact scenario for future fracking well construction over a section of Pennsylvania.

“Fracking Pennsylvania” uses maps and other media to create a narrative of hydraulic fracturing and its consequences. While originally intended for the community members we work with in southern Pennsylvania, I hope this story map becomes a useful tool for many different communities grappling with fracking.

While I have my time in the Watchdog spotlight, I want to publicly thank everyone here for welcoming me into the awesome world of SkyTruth. I’m so grateful for the learning opportunities I had last summer and for all of the support I received. Special thanks to Christian for introducing me to SkyTruth and to John for helping me improve my Story Map even though he is definitely one of the busiest people in the office. I look forward to sharing my experience through the Carleton Internship Ambassador program this year.

Oil Spill in the Persian Gulf
Scroll to top