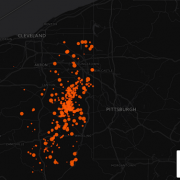 Since the launch of FrackFinder, we’ve found great success in our efforts in Pennsylvania, Ohio, and West Virginia enlisting the public to help us analyze aerial imagery across the Marcellus and Utica shale gas-drilling regions. The results have been unique datasets that are being used, or can be used, by researchers to study the impact fracking has on public health and the environment. What we’ve learned is helping us refine our tools and methods for future rounds of FrackFinder. Here we’ll give a rundown of the results of our efforts and what we’ve done with them, as well as links to the data we’ve made available free for public use.

Our motivation behind the FrackFinder project was to fill gaps in publicly available information related to where fracking operations in the Marcellus Shale were taking place. Seeing an opportunity to make this info available to the public, but lacking state data, we began mapping fracking sites ourselves. The locations of drilling sites, also known as “well pads,” were hard to come by, but state permits for drilling individual oil and gas wells were easily accessible. Unfortunately drilling permits aren’t very useful on their own. The permits are just approvals to drill: they don’t say if the site is active, when drilling and fracking began or ended, or if development of the drill site ever happened at all. Luckily, each permit provides the exact location where the operator is authorized to drill their well. By pairing the location information from the permits with available high-resolution aerial survey photography from multiple years, it is possible for us to learn where active well pads are and narrow down when they were built to within a span of a couple of years.

Of course, analyzing multiple years’ worth of imagery for thousands of permit locations is a monumental task.  To get the job done, we looked to crowdsourcing to speed up the process. Crowdsourcing also gives us the opportunity to reach the public, get people interested in citizen science, and provide them the opportunity to see the impact of fracking for themselves. It’s important for people to understand the large footprint fracking has compared to historical oil and gas drilling in the region, and seeing just how close many well pads are to farms and homes can change some people’s perspective on the issue.

Timelapse image showing how close drilling is to homes, and how big modern fracking operations are.

Our first phase of FrackFinder took place in Pennsylvania.  For this project we had 3,000 locations to examine on three different years of imagery, and we asked 10 volunteers to look at every site: a grand total of  90,000 image analysis tasks. Participants were presented with an image of a location corresponding to a drilling permit and were asked to determine if the site was active or inactive on the basis of visible infrastructure.  All the tasks were knocked out in three weeks, thanks in part  to a Washington Post article mentioning the project published around the time of our FrackFinder launch. In the quality assurance phase, we found that if seven of the ten participants for a given task agreed there was active drilling then our experienced in-house analysts agreed with the crowd, so we established 70% crowd consensus as an acceptable threshold to confirm if there was indeed drilling at a location.  This first project went so well that we quickly supplemented it with another year of imagery.  The final map we produced shows the location of active well pads in imagery from 2005, 2008, 2010, and 2013, and we intend to update it with 2015 imagery in the near future.

Not long after publishing the data on well pad locations from the first phase, we were approached by researchers from Johns Hopkins University who were interested in our data. They wanted to study the public health impacts of living near a modern fracking site, and the state couldn’t provide anything comparable to what we had at the time. They were specifically interested in how volatile chemicals coming off drilling-related fluid impoundments would affect people living nearby. While we had locations for the wells from our first FrackFinder project, we didn’t have information on the size, location and timing of the impoundments that may contain drilling and fracking fluids.

Hydraulic fracturing-related fluid impoundments in Pennsylvania. Click on the image to link to the full interactive map.

Using the same imagery we had prepared for the first round of FrackFinder, we launched another round of crowd-assisted image analysis using the same methods to determine the presence of impoundments. After the public identified water bodies that were likely related to drilling, our analysts verified that they were impoundments and delivered the data to the researchers. The Pennsylvania FrackFinder project was the first time we used crowdsourcing to create a high-quality data set for use in actual research.  And it has paid off in improving the public’s understanding of the health risks posed by living near modern drilling and fracking activity. The Johns Hopkins researchers have published the following peer-reviewed studies based in part on our work:

Ohio was the first state outside of Pennsylvania to have its own FrackFinder spinoff. Instead of launching a public crowdsourcing project we enlisted the help of students at Walsh University in Ohio who were interested in studying the impact of fracking on the environment and looking to get experience with GIS image analysis. We asked students to delineate all terrain that was modified to accommodate the drilling activity, including forest clearcutting around actual fracking infrastructure. This not only provided an educational opportunity for the students, but it allowed us to build and experiment with tools we plan on using in the future to let the public delineate fracking sites and create complex polygons, rather than simply confirming the presence or absence of a well pad at a specific point. This work hasn’t been used for research yet, but it still produced a high-quality data set that is available to anyone who would wish to use it in the future to quantify the ecological footprint of fracking-related land use, and explore the habitat and ecosystem impacts of modern drilling and fracking.

Utica Shale fracking well pads in Ohio. Click on the image to link to the full interactive map so you can zoom in and see the outlines of fracking sites delineated by students at Walsh University.

Due to time constraints, we conducted the first round of West Virginia FrackFinder internally, and now have a multiyear map and dataset showing the locations of Marcellus and Utica Shale drilling sites statewide. We plan on launching a new public FrackFinder round this summer using the same area delineation technique that was demonstrated in Ohio. In West Virginia, we delineated the footprints of well pads and fluid impoundments, but not the broader area of clearcutting and landscape modification surrounding the drilling sites as was done in Ohio. When we launch our next public FrackFinder round we will ask the public to delineate this “impact halo” around well pads to help determine the ecological footprint of fracking in the state.

Fracking-related fluid impoundments in West Virginia for the same years as the map above. Click to go to the full interactive map.

The data we produce for West Virginia is being used by researchers at UC Berkeley and at Downstream Strategies. They will perform a geospatial proximity analysis to see how fracking activity near sensitive populations in schools, hospitals, homes, and rehabilitation centers, paired with different chemicals used in fracking, affects public health. The results of their research will be detailed in a comprehensive white paper that will be published with policy makers in mind.

Taking the “Secret” out of Rendezvous at Sea