NASA Earth Observatory image modified by SkyTruth
Blog - Latest News
You are here: Home1 / Biodiversity2 / Taking the “Secret” out of Rendezvous at Sea 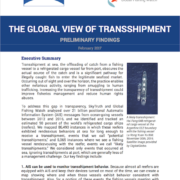 In January, SkyTruth reported on our work with DigitalGlobe to identify and photograph refrigerated cargo vessels (reefers) in the Western Indian Ocean. The goal was to capture high-resolution images of vessels that our analyst had painstakingly targeted for suspicious behavior by monitoring and analyzing their movements based on signals from their Automatic Identification System (AIS) broadcasts. We targeted reefers because they are key to transshipment—they receive catch transferred from multiple fishing vessels and carry it to port. The practice, called transshipment, saves fishing vessels time and fuel, but it is illegal in many cases because it can enable illegally caught fish to be mixed with legal catch.

The images DigitalGlobe acquired in November revealed multiple instances of reefers in rendezvous with other vessels, including fishing vessels. Now, in collaboration with Global Fishing Watch, SkyTruth data scientists have made the job of targeting reefers much easier. Together, the team has developed an artificial intelligence system capable of identifying and tracking transshipments around the world by following reefers and classifying their movements. An analysis of 21 billion AIS signals from ships at sea has created the first-ever global map of transshipment.

Today, SkyTruth and Global Fishing Watch are publishing those results in a new report: The Global View of Transshipment: Preliminary Findings. According to our analysis, from 2012 through 2016, there were more than 86,490 potential transshipments in which reefers exhibited the slow movements indicative of transshipment. Of those, 5,065 were likely transshipments because they included a rendezvous with an AIS-broadcasting fishing vessel — meaning they traveled at a specified slow speed in close proximity to one another for a certain length of time that indicated a likely transshipment. 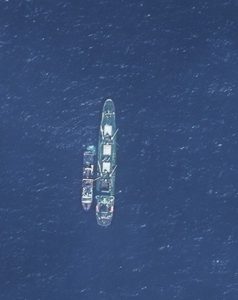 This image of the reefer Hai Feng 648 with an unidentified fishing vessel off the coast of Argentina is just one of the images acquired on Nov 30, 2016 in collaboration with DigitalGlobe. (DigitalGlobe © 2017)

Like most activity that occurs on the ocean, transshipment has been hidden from the world. This report shines a new light over the horizon, revealing the extent and magnitude of transshipment. Based on the data generated by SkyTruth and Global Fishing Watch during this project, our partners at Oceana are publishing a complementary report today that highlights the global scale of transshipment and its complicity in illegal fishing and human rights abuses. The report identifies hotspots of transshipment and the ports that reefers visit, exposing associations between transshipment and illegal, unregulated and unreported (IUU) fishing activity. 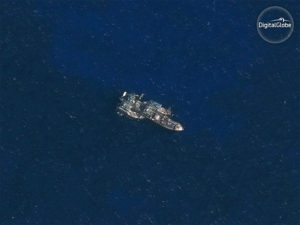 The refrigerated cargo vessel (reefer) Leelawadee seen on November 30, 2016 with two unidentified likely fishing vessels tied alongside was featured in our post on January 16. (DigitalGlobe © 2017)

Oceana’s report calls for the banning of transshipment at sea, expanded mandates for unique identifiers and vessel tracking for fishing vessels. Currently AIS is not required on all vessels, and fishing vessels engaged in illegal activity are known to turn off their AIS when they don’t want to be seen. Having access to high-resolution satellite imagery is a game-changer when it comes to illuminating these rendezvous, especially when only one of the vessels is broadcasting AIS. That’s why we are thrilled to be working with the folks at DigitalGlobe, who are donating time and imagery from their powerful WorldView satellites to demonstrate that we can systematically shine a spotlight on these transshipment events at sea. In partnering with SkyTruth, DigitalGlobe shows how corporations and nonprofits can join together to solve some of the world’s thorniest problems.

Mystery Moves: What is the Chinese Squid Fleet Doing in the Pacific?