If you can see it, you can CHANGE it

Message From the President

We were braced for it, but it still hurt: from a policy perspective, 2017 turned out to be about as bad for conservation as we had feared at the close of 2016. The environment is one area where President Trump has kept many of his promises. His administration has killed or rolled back a host of regulations that would have improved the nation’s air quality and public health, mitigated the impact of mining on the nation’s streams and rivers, decreased our contribution to global warming, and increased the energy efficiency of our trucks, automobiles, and household appliances. He has vigorously promoted the increased production and use of fossil fuels, fast-tracking the auctioning of public lands and waters for mining and drilling. And with the eager cooperation of his allies in Congress, he has launched an assault on the nation’s bedrock environmental laws, threatening to strip endangered species of protection, limit public access to information, and throttle public participation in government decision making.

This is not only anti-environment, it is anti-democracy.

How do we respond? By confronting opacity with transparency. By bearing witness and speaking truth to power. By standing up for the institutions and values that actually do make this country great. By boldly embracing facts, logic, and rationality.

At SkyTruth, we used our most effective tools and skills throughout 2017 to promote the public’s ability to know and understand how our lands and waters are being managed. Among other things, we:

We also successfully launched Global Fishing Watch as an independent non-profit organization.  As a GFW research partner our close relationship benefits both organizations: SkyTruth team members used Global Fishing Watch data to automate the detection of transshipment of fish at sea, a key enabler of overfishing and illegal activity; and our team in Jakarta worked with Indonesian fisheries officials and staff to help them live up to their public commitments to bring transparency to fisheries management.

In the following sections, you will learn more about SkyTruth’s 2017 activities and successes. As we cope with a post-truth world, be assured that SkyTruth will continue to make the invisible, visible, for all the world to see.  Because if you can see it, you can change it.

“The Worldview image is exactly what I’m looking for, enabling New Mexico policy makers and the public to see the inexcusable amounts of natural gas flaring by oil and gas companies in the NM Permian. Fantastic. We’re setting the stage for a state Venting, Flaring & Leak rule and the image belies industry’s claims that they are already fixing the problem, showing just how widespread flaring really is.”

In mid-2017 we stood up the Global Fishing Watch (GFW) project as an independent 501(c)(3) nonprofit.  As part of our ongoing collaboration with GFW, SkyTruth staff in Jakarta worked closely with the Fisheries Ministry of Indonesia to publish their previously unreleased, state-collected vessel tracking information – known as VMS data – in the GFW platform.  This work attracted high-level government and media attention, and facilitated several enforcement-related investigations throughout the year. Peru publicly committed to follow suit, and SkyTruth staff attended meetings in Lima and Panama to implement this commitment.

We have been systematically monitoring the chronic oil spill at the Taylor Energy site in the Gulf of Mexico since this leak began in 2004.  We updated our estimate of the cumulative amount of oil spilled since the leak began, and prompted additional coverage of this leak by the Associated Press, including several articles in The Times-Picayune.  We also began systematically monitoring several pollution hotspots around the world, including the Gulf of Oman, the Strait of Malacca, and the Gulf of Guinea.  We provided satellite imagery of pollution events in the coastal waters of the Gulf of Oman to local conservation staff working on the ground to stress the importance of further monitoring and stricter enforcement of environmental standards. 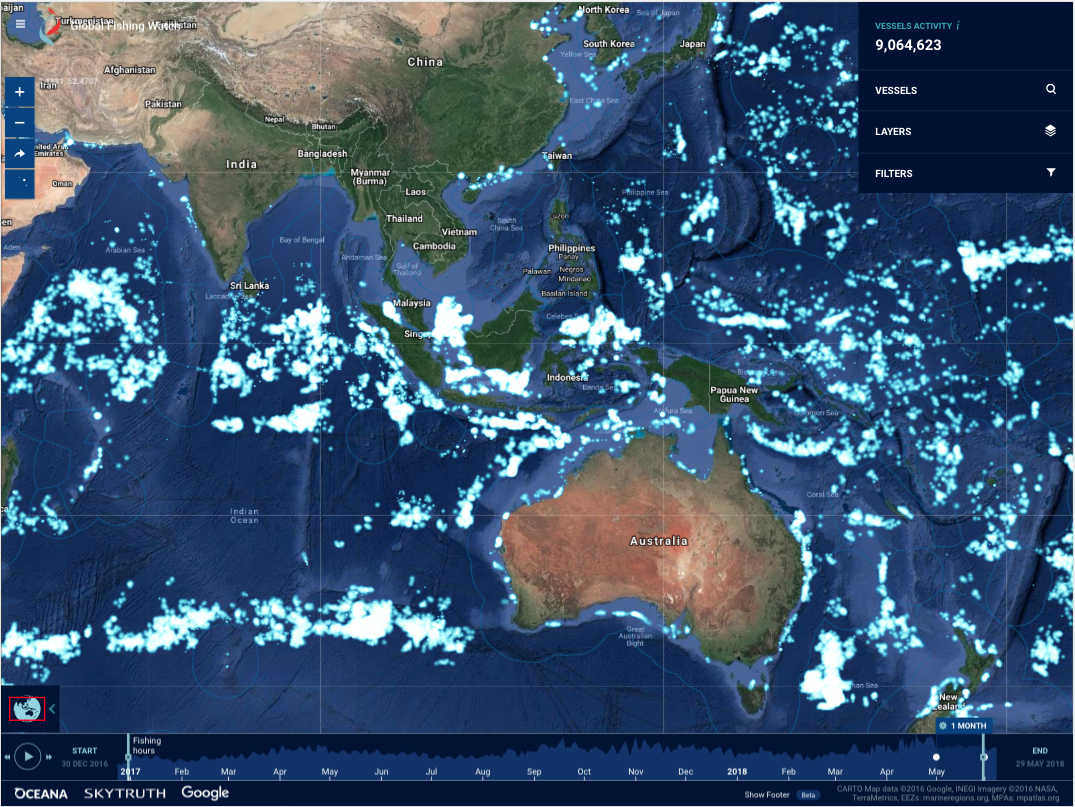 “Thanks very much for your effort and time. Really appreciate for posting the image. We are really concerned about the effort taken by the Indian government to clean up after the spill. I believe your posting will create awareness about the size of the spill and speed up the clean-up effort.”

SkyTruth updated our oil and gas footprint data set and map for Pennsylvania using the most recent imagery from the USDA’s National Agriculture Imagery Program.  Our staff provided technical assistance to researchers at Johns Hopkins Bloomberg School of Public Health using the data to investigate the public health impacts of unconventional gas drilling and hydraulic fracturing.  Their research led to peer-reviewed publications in Epidemiology and JAMA Internal Medicine which were part of the larger body of scholarship reviewed by Maryland lawmakers before their decision to uphold the state’s ban on fracking.

Our global multiyear dataset of natural gas flaring events was used by a researcher from the Lamont Doherty Earth Observatory at Columbia University, an expert witness in a legal action in Colorado, activists working to reduce flaring in the Niger Delta, a business analyst assessing flaring in the Permian Basin, an investment management firm monitoring the progress of drilling operations overseas, and an advisor to the government of Mauritania investigating offshore oil operations in a proposed marine protected area.  We built on this success with another interactive map that lets users explore the volume of natural gas being flared at sites worldwide. 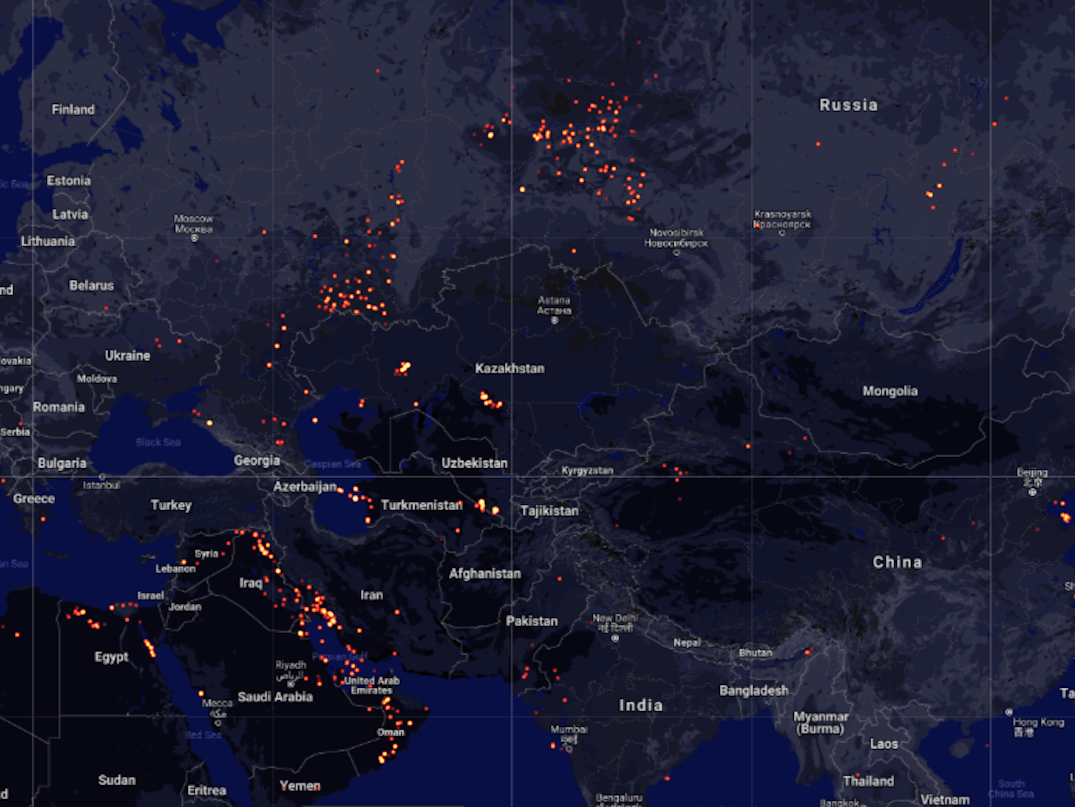 “While many of our hard-won environmental protections are at risk right now, I’m glad to see the Gulf Monitoring Consortium (and, specifically, SkyTruth) helping our country take some steps forward in monitoring pollution.”

The multi-decade, annual mountaintop mining (MTM) footprint data that SkyTruth created was accepted for publication in the open-source journal PLOS ONE.  The data is being used by researchers at Duke University, West Virginia University, The University of North Carolina, and the University of Tennessee.  Past research using a rudimentary version of this data resulted in the EPA revoking a mining permit that had been issued by the Army Corps of Engineers, and led to multiple peer-reviewed publications.  We hope that that this new, more granular data will spur more peer-reviewed scholarship and produce similar policy outcomes.

Throughout the 2017 Atlantic hurricane season, SkyTruth launched several interactive, online maps showing oil and gas infrastructure at risk from storm damage, as well as a map-based site that solicited pollution reports from citizens in the affected areas.  We highlighted spills from storm-impacted refineries and other chemical plants, some surrounded by densely populated residential areas, and revealed the extent of inland flooding that submerged drilling sites and wastewater impoundments and sent a range of chemicals flooding into people’s homes, schools and businesses. 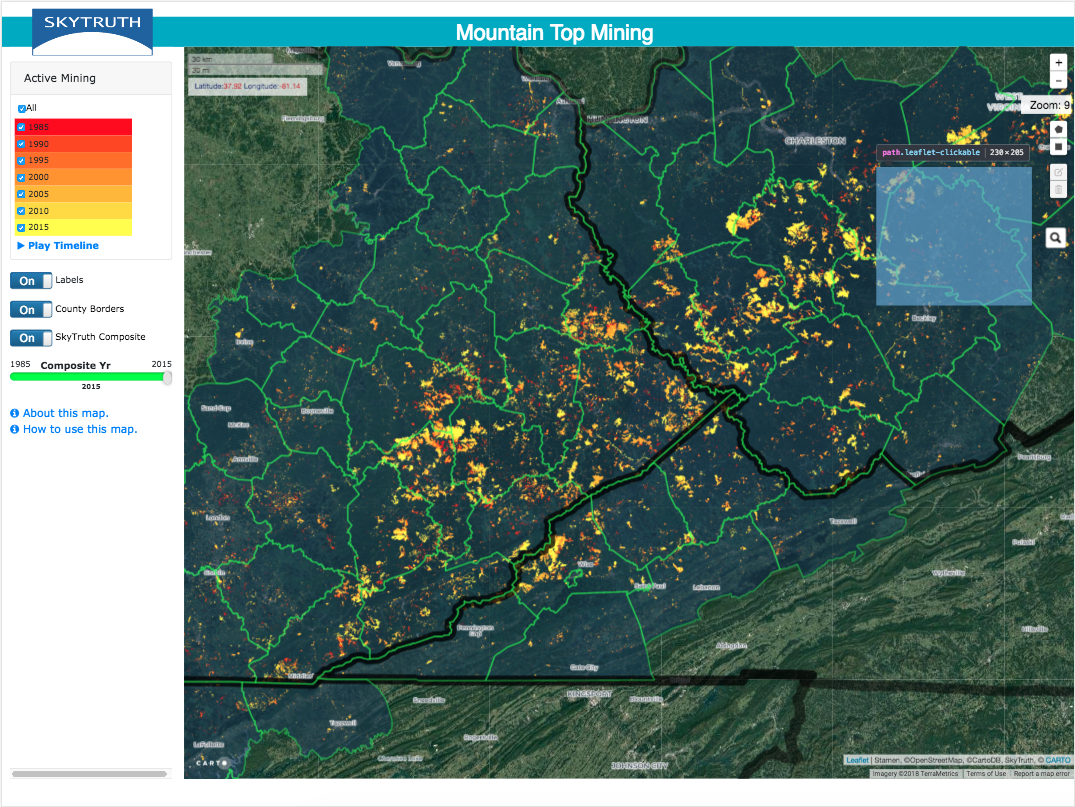 “[This information] will be very useful in helping to ensure our township has everything in place as we deal with the gas industry and our beautiful agricultural areas. Really thank you.  I didn’t really expect to receive such a thorough answer.”

Protecting a legacy of biodiversity

Late in the year, the Trump administration announced significant reductions to several National Monuments.  We produced an interactive map showing two of the most highly impacted Monuments: Bears Ears and Grand Staircase–Escalante, both in Utah.  Our partners at EcoFlight shared geotagged photos from their many flyovers, and helped us better illustrate just what was – and remains – in jeopardy.

In the last quarter of 2017, we launched a project to completely overhaul our SkyTruth Alerts platform, which began its life as an internal tool we used to help us identify and track significant environmental incidents, particularly for mining, oil & gas, fracking, etc. We released Alerts to the public in early 2012, and it currently has roughly 3,800 users. However, the system hasn’t been updated since then, and technology has come a long way in the meantime. We have launched the overhaul project by first surveying existing users to find out how they use alerts and the features they would like to see. We then put together an ambitious 3-year plan that includes producing a prototype by early 2018, and launching an alpha version by the end of 2018. We want to add robust account management, satellite imagery, and annotation tools, among other features, to Alerts. We also hope to begin looking at ways to use machine learning and computer vision in the next couple of years to automate some of the monitoring. 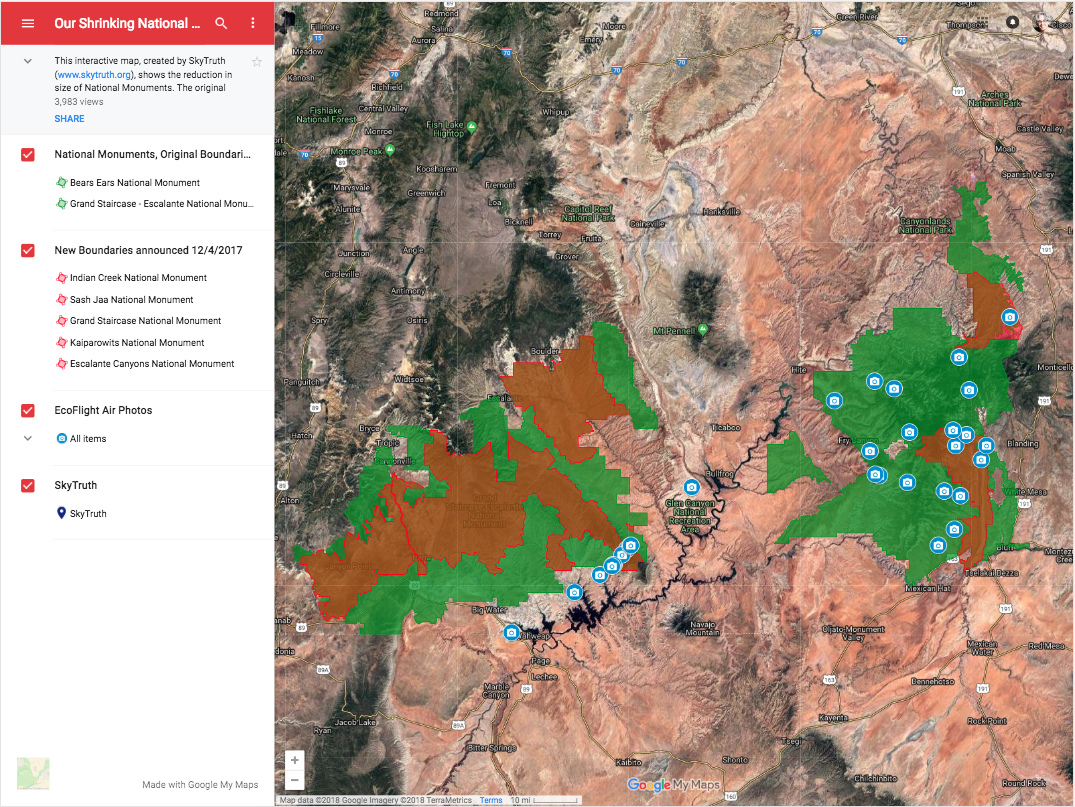 “SkyTruth provides a great service to all groups looking to understand landscape-scale effects in locations around the world. Their innovative techniques to visualize environmental changes over time are truly groundbreaking.”

It’s no small role that SkyTruth’s board of directors plays in ensuring we continue to carry out our mission. We are fortunate to have assembled a group of highly qualified individuals from across the country and many sectors.

SkyTruth gratefully acknowledges the generous support of our funders, including individuals from around the world. Your support makes it possible to illuminate human impact on the planet and inspire conservation solutions through technology. Thank you! 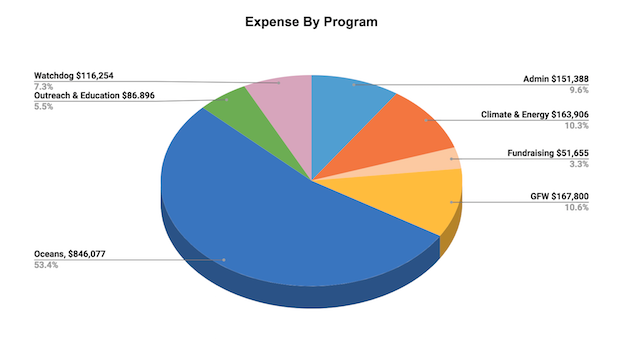 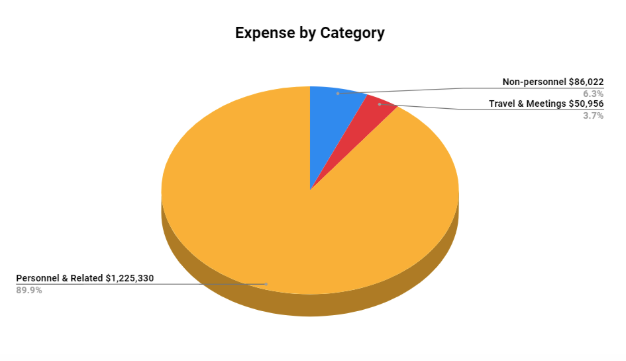 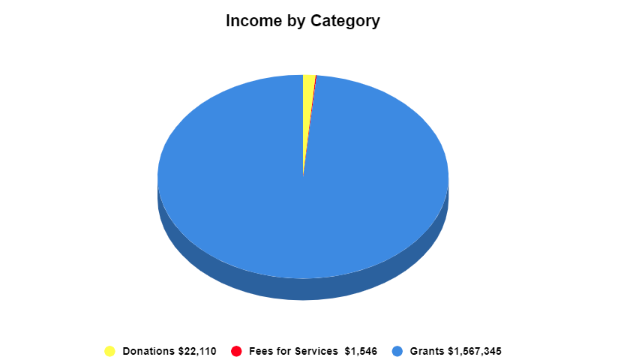 SkyTruth uses the view from space to motivate people to protect the environment. We are a 501(c)(3) nonprofit organization headquartered in Shepherdstown, West Virginia, with offices across the United States and in Indonesia. We believe more transparency leads to better management and better outcomes. By sharing our findings – stunning imagery and robust science-based data – with the public for free, we move policy makers, governments and corporations towards more responsible behavior and more accountability for the environment.