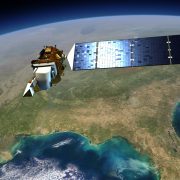 It’s hard for us to care about problems we can’t see.

It’s hard for us to manage problems we can’t measure.

That’s why I started SkyTruth – to make environmental changes visible to everyone.

And that’s why I was so moved by a recent encounter. Last week, after the Our Ocean conference had wrapped up, I found myself having dinner in the lovely home of a new friend of SkyTruth. Our little party included Tom Udall, senator from New Mexico.   When he heard about SkyTruth, he asked me if we used Landsat images.  I told him I thought the Landsat satellite program was one of NASA’s most important success stories; and that we use Landsat images on a daily basis at SkyTruth for environmental monitoring.

His eyes lit up and he told me something I hadn’t realized: his father, Stewart Udall, former Secretary of the Interior, was one of the key drivers in the origin story of the Landsat program. In the mid-1960s the head of the US Geological Survey, William Pecora, convinced Secretary Udall that the nation should launch a fleet of earth-observing satellites. In 1966, Udall announced the program – a politically savvy move that prompted NASA to get involved and take charge of the design, construction, launch and operation of the satellites.  In late 1971, the first Landsat satellite was launched, ushering in the era of space-based remote sensing that is thriving today.  Landsat satellites have been operating continuously since Landsat-1, with Landsat-7 and Landsat-8 currently carrying the torch.

More than 4 million Landsat images of the earth have been collected, with hundreds of new images added to that tremendous archive every day.  This provides a priceless dataset for measuring – and showing – how landscapes and ecosystems have changed over the past 45 years, a time of skyrocketing population growth and human-caused disruption of interconnected natural processes and systems that we’re racing to fully understand.  Landsat imagery provides a critical tool for investigating and understanding the many ways we’re impacting our own life support systems.

September 21 marked the 50th anniversary of Stewart Udall’s announcement that launched the Landsat program.  His son Tom was guest of honor, and should be very proud of this piece of his father’s impressive legacy.  We certainly are grateful for his vision: “a program aimed at gathering facts about the natural resources of the earth from earth-orbiting satellites.”  This is an example of something government can do well: investing in infrastructure that broadly benefits society, and provides a stable platform for the development of businesses and economic activity.  Landsat is the data equivalent of the interstate highway system, a public good that has spawned a thriving for-profit remote sensing industry in the US and beyond.

We’re looking forward to the uninterrupted continuation of the Landsat program and (at least) another 50 years of systematic Earth observation, because it’s needed now more than ever.