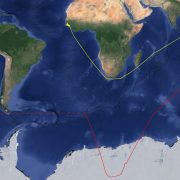 The red tracks show the broadcast position of the Lu Yan Yuan Yu 10 apparently transiting across Antarctica (inset). The yellow tracks show its true location along the coast of South America passing through the Strait of Magellan and into port at Lima, Peru.

Occasionally, the AIS messages transmitted from a ship provide a location that makes no sense, say, in the middle of the Antarctic or over a mountain range. In such cases, either the AIS transponder has malfunctioned, the data got scrambled in transmission, or the system has been tampered with in a deliberate attempt to disguise the vessel’s location.Ship operators who are motivated to intentionally disguise their location may be engaged in illegal activity, be it fishing, transferring illegal catch, or carrying human cargo. Our goal is to strip away their ability to hide behind erroneous tracks.

Sometimes a vessel will flip their latitude or longitude, reporting a position at latitude 40° north for example when they’re actually at 40° south. An example of a Chinese fishing vessel that appears to be in the Bay of Bengal near India, when in fact it’s most likely in the southern hemisphere is shown in a SkyTruth blog post from March 2016. [Of note: The environmental activist group Sea Shepherd had seen our earlier posts on the false location of a vessel in this fleet. They steamed to our corrected location and eventually intercepted vessels engaged in illegal driftnetting.]

One dead giveaway of a false location occurs when a satellite receives an AIS signal from a vessel claiming to be outside the receiving range for that satellite, about 1,500 nautical miles. We also see terrestrial receivers picking up AIS messages reporting positions far out at sea, well beyond the range of any land-based receivers. Moving an unlikely track across the map until it is within reasonable range of the receiving satellite can give clues to the vessel’s true location. Sometimes, the shape of its track provides the rest of the story.

Such is the case with the Chinese vessel tracks in the image above. The vessel broadcast a series of locations showing a path over Antarctica. When our analyst, Bjorn Bergman and engineer, Kevin Wurster, slid the tracks up the map and to the right, they nestled neatly against the coast of South America. With a precise latitude and longitude adjustment of 85.3925° to the east and 41.6962° to the north, the corrected track showed that the vessel had fished with the squid fleet off of Argentina, transited through the Strait of Magellan, fished with the squid fleet off of Peru, and then entered into the Peruvian port of Callao. (Interestingly, in March of 2016, Argentina’s Coast Guard sank this vessel, the Lu Yan Yuan Yu 10, after attempting to capture it for suspected illegal fishing in Argentinian waters.)

The same pattern of location errors has been seen among Chinese fishing vessels working off the coast of West Africa. After leaving the Coast of China and crossing south of the Equator, vessels jump 41.6962° in latitude, then jump 85.3925° to the west when they cross the prime meridian, only to jump again as they cross the equator going north. Bjorn discovered this distinct pattern while assessing the track of the Chinese vessel Fu Yuan Yu 359. “The boat appeared to be off the coast of Mexico, when in fact they were off the coast of Guinea and Guinea Bissau,” he says.

In the uncorrected (red) and corrected (yellow) tracks below, you can clearly see the pattern of AIS errors occurring when the vessel crosses the equator and the prime meridian. The giveaway was the instantaneous changes in latitude and longitude of several thousand miles.

The red track shows the broadcast position of the Fu Yuan Yu 359. The dashed lines indicate instantaneous changes in latitude and longitude that put the vessel off the coast of Mexico. The yellow track shows our reconstruction of their true position as they transited from the Chinese coast to fishing grounds off West Africa.

Six other vessels followed a similar course and falsely appear to be in the same location southwest of Mexico. This pattern of latitude and longitude offsets triggered by crossing the equator and Prime Meridian has been observed in 30 vessels. Falsifying their AIS location appears to be a frequent practice for Chinese vessels fishing off of West Africa. Some are offsets as described above. In other cases the vessels broadcast a position with a flipped latitude or longitude. We have passed on these findings to local authorities prompting an investigation and this recent article in Time.

Although a considerable number of vessels have been observed broadcasting false locations, they reflect a tiny fraction of the total AIS broadcasting fishing fleet. (We estimate fewer than 1 in every 1,000 vessels consistently offset, or flip, their locations.) After discovering that many of them follow the same patterns, it has been relatively easy for our analysts to identify and correct their locations. The next challenge is developing algorithms that enable a computer to do that same work automatically. We’re on it.

Advancing the Science and Technology of “Sky Truthing”: SkyTruth in the...