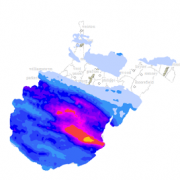 In late June devastating flooding hit many communities across southern West Virginia resulting in over 20 fatalities and complete destruction of homes and businesses across the Mountain State. Because we are located in West Virginia and have been studying mountaintop removal (MTR) coal mining across Appalachia, we’ve received a number of questions about what role MTR mining may have played in this recent disaster.

Depending on the amount of mining in the impacted watersheds, the quality of existing baseline data, and the number of measurements taken during and after the flood, scientists may not find a “smoking gun” directly linking the severity of this flood event with MTR mining. But let us take a look at what we do know about the relationship between flooding and MTR mining.

If you are familiar with stormwater runoff issues then you have probably seen a diagram like the one above. Soil and vegetation absorb water. Impervious surfaces, like rock and pavement, do not. Since blasting off ridge tops to reach seams of buried coal strips the mountains of soil and vegetation, it seems logical that MTR mining would contribute to more intense flash floods. But even after decades of study there are a surprising number of gaps in our understanding of exactly how mining alters flooding.

Research conducted so far suggests that MTR mining can contribute to greater flooding during intense rainfall events, but some studies actually found less severe flooding in watersheds with mining. Several of these studies suggested that valley-fills and underground mine workings have the ability to retain water, which may account for less severe “peaks” during moderately severe storms. If you want to dig into the details, I recommend starting with the summary of hydrological studies on MTR contained in Table 1 of this paper by Dr. Nicholas Zegre and Andrew Miller from West Virginia University.

What most of these studies have in common is that the researchers must at least know where mining occurred and how much surface area was impacted by said mining. This is where our work here at SkyTruth comes into play because we’ve been mapping the when, where, and how much of MTR mining for over forty years.

Thanks to a satellite record going back to the 1970s, SkyTruth can look back in time to measure the footprint of mining in Appalachia. We continue to make this data freely available for research, and so far our decade-by-decade analysis has been cited in at least six peer-reviewed studies on the environmental and public health impacts of MTR. These studies investigate everything from the increased risk of birth defects and depression to impacts on biodiversity and hydrology. But clearly there are still many unanswered questions left to research. 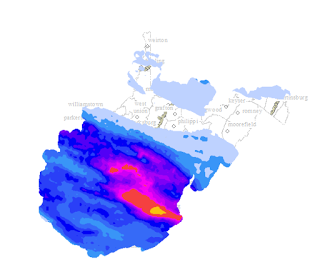 Finally, it is worth noting that much of the rainfall (left) was concentrated on Greenbrier County, a part of the state with relatively little MTR mining. Neighboring Nicholas County, however, does have some large mines so it may be possible for hydrologists to diagnose and measure the difference in flooding between mined and unmined watersheds which received equivalent rainfall. But that will take time to decipher and analyze.

In the meantime, SkyTruth and our partners at Appalachian Voices and Duke University are working this summer  to update and refine our data about the spread of MTR mining in Appalachia. The resulting data will allow more comprehensive and more accurate research on the effects of MTR mining. Our vision is for this research and resulting studies on the impacts of MTR to lead to better decision-making about flood hazards, future mine permits, and mine reclamation.

Advancing the Science and Technology of “Sky Truthing”: SkyTruth in the...
Scroll to top