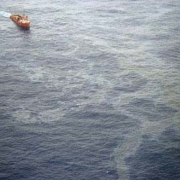 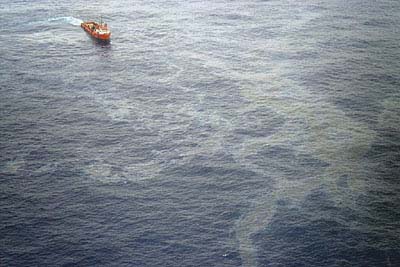 2011 turned out to be both a banner year for Brazilian oil exploration and a big eye-opener for the people of Brazil. Fueled by the discovery of 19 new oil and gas reserves and hungry for the spoils, big multi-national companies poured billions of new investment dollars into the South American nation.

Most Brazilians expressed little concern over the potential safety risks of the offshore boom. But then SkyTruth president John Amos noticed an inconspicuous report of a seemingly insignificant oil leak buried in the daily cycle of business news.

On November 8, 2011, Reuters reported that Brazil’s oil regulator, the National Petroleum Agency (ANP), was investigating an offshore oil leak near Chevron’s Frade field, 230 miles from the coast of Rio de Janeiro. According to the report, Chevron was checking to see if oil was leaking from a crack in the seafloor.

When John reviewed satellite photos of the area, he saw a slick originating near an exploratory drilling site that extended for 35 miles and covered about 180 square kilometers. By his estimates the sheen on the water represented about 47,000 gallons of oil.

Three days later it had grown to 56 miles in length, and Chevron had declared it a natural seep unrelated to their drilling activities. “It is possible, but call us skeptical,” John posted on our blog. “From my previous years working as an exploration geologist I know there are natural seeps off Brazil. But I’ve never seen a natural seep create a slick this large on a satellite image.” What’s more, comparisons with historical satellite photos showed the slick had not been there before.

Over the following days we watched the spread of oil on the water’s surface. While Chevron maintained that it was natural and estimated a leak rate of 8,400 to 13,860 gallons (200 -330 barrels) per day, John posted satellite images that hinted at a much bigger problem. By his analysis the spill was leaking 157,000 gallons (3,700 barrels) per day. That was more than ten times the official estimate.

John’s reports and the indisputable images he posted gained international media attention,  spurred a vigorous discussion on our site, and led to a public outcry in Brazil.

Unable to hide the true nature of the spill, Chevron came under scrutiny from Brazilian legislators and state agencies, and the tone of their official story began to shift.

Under pressure for more transparency, the oil and gas giant eventually conceded they had lost control of a well. They claimed the pressure of the reservoir had exceeded their expectations and forced oil up through fissures in the seafloor.

Kerick Leite who was working for ANP in offshore inspections at the time reflects on the situation this way: “In my opinion, if were not for SkyTruth’s independent assessment of the spill existence and size, I believe the Chevron Spill would have been dismissed as a minor one,” says Leite, “maybe even a natural seep, as initially reported, and remain mostly unknown by the public even today.”

According to the New York Times, Brazil’s former environment minister, Marina Silva, said “This event is a three-dimensional alert to the problems that may occur.” She told the Times that the spill served as a warning just as Brazil was preparing to expand its oil production and exploit its tremendously rich presalt reserves—an extremely complicated process because the presalt lies in 10,000 feet of water beneath thick layers of sand, salt and rock.

As a result of the spill and Chevron’s misleading response, the ANP banned the company from all drilling activities in Brazil onshore and off, pending a full investigation. After lengthy court battles, the company ended up paying  24 violations, and the company paying $17 million in fines to the ANP, more than $18 million to the Brazilian Ministry of the Environment, and $42 million to settle civil lawsuits.

What’s more, it emphasized how small the playing field is in the deepwater oil and gas drilling industry. As we learned through our Twitter followers, the drilling contractor on the job had been Transocean—the same company involved in the disastrous BP / Deepwater Horizon spill in the Gulf of Mexico just a year earlier. Brazil dodged a bullet with this accident, but the new understanding of how bad it might have been made Brazilians pay attention.

“It was a wake-up call,” said John. “These are multi-national organizations. The same contractors are working for most of the major name-brand oil companies. This kind of thing can happen anywhere.” Chevron’s reluctance to claim culpability and their delayed response to the spill drove home the need for diligence in regulation and enforcement by Brazilian authorities.

Leite said the spill has led to increased public awareness and concern over safety in the oil and gas industry in Brazil that persists today. “I believe the issue of offshore safety now has more priority than before the chevron spill,” he says. “Back when I still worked at the ANP sector dedicated to environmental issues and operational safety, it had around 16 to 18 servants. Today there are around 40 servants dedicated to it.”

It was a full year before Chevron was allowed to resume doing business Brazil. During that time, a significant portion of the company’s global investments remained inaccessible to them. We hope the loss of profits, over and above the fines levied by Brazilian authorities, will provide incentives for Chevron to do a better job and will send a message to other oil and gas companies. Accidents can no longer be hidden or brushed aside. Chevron’s Frade field spill demonstrated that a satellite image can be worth a thousand words — and in this case, millions of dollars.