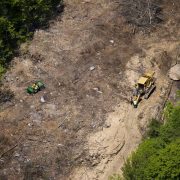 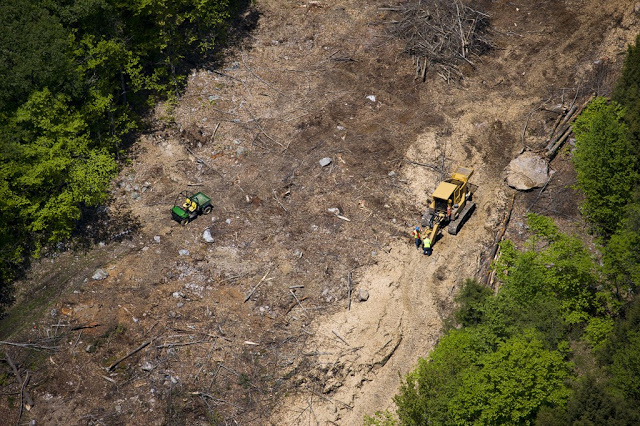 Construction work on the MARC 1 pipeline right-of-way in the Endless Mountains of Pennsylvania. Photo by J. Henry Fair, flight by LightHawk.

Fracking is not the only part of oil and gas drilling that has an impact on the landscape and the environment. Case in point: the newly-built MARC 1 pipeline runs for 39 miles through Bradford, Sullivan, and Lycoming counties in northeast Pennsylvania, carrying natural gas produced by horizontal drilling and hydraulic fracturing (fracking) in the Marcellus Shale. Along the route this pipeline crosses 71 roads, 19 named streams and rivers, many small unnamed creeks, and cuts through a densely forested swath of the beautiful Endless Mountains. 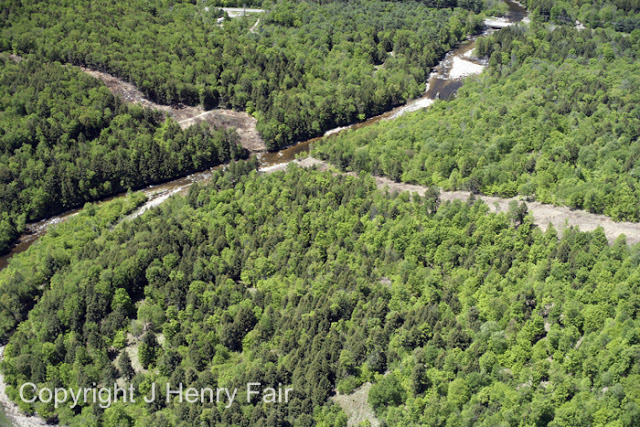 Construction of the pipeline began in the fall of 2012, and we were interested in illustrating construction-related impacts. Finding info on pipeline routes, however, is no simple task. The first map which turned up was a scanned pdf created by Central New York Oil and Gas Company (CNYOG); a deeper dig for a more accurate map turned up the Department of Transportation’s National Pipeline Mapping System (NPMS), but unfortunately NPMS data is not available for download. So we decided to create our own map of the pipeline – informed by the CNYOG map, and validated against the NPMS data: 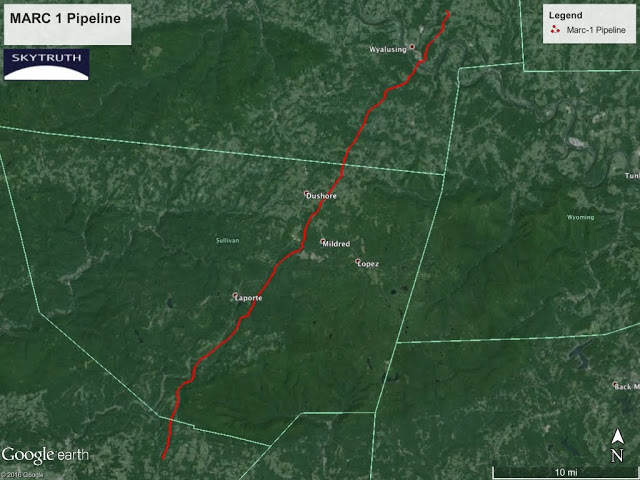 The pipeline map was created by tracing the route on aerial and satellite imagery available in Google Earth. Imagery was collected during the pipeline’s construction which helped us do a pre- and post-construction comparison. Road and stream data from the US Census Bureau’s Tiger/Line was used to calculate the number of roads and streams which were intersected by the pipeline. Here is a side-by-side look at a selected site along the pipeline route before and during construction: 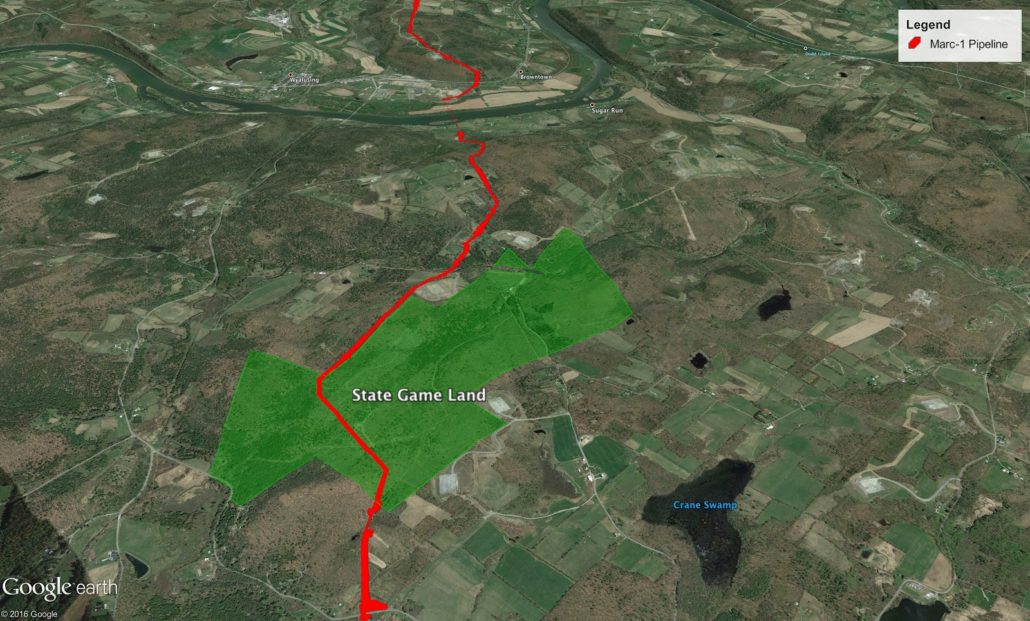 We used the USGS’s 2011 National Land Cover Dataset to assess the area and types of land use impacted by the construction of the pipeline. Overall, construction of the Marc-1 pipeline right-of-way impacted over 400 acres of land, 318 of which were forested (see the exact breakdown of land cover types at right and raw data here).

Now the MARC 1 pipeline is a done deal and some of the impacts will eventually fade into the background, but the corridor through forest and woody wetlands will remain. From air emissions and habitat fragmentation to property rights issues, we need to be careful not to overlook the environmental impact of pipeline building, especially as developers focus their efforts on expanding pipeline capacity to keep up with oversupply of natural gas.

MARC 1 crossing field and forest near the Susquehanna River close to Sugar Run, PA. View larger version. Compare imagery from 2011 and 2012. Directions to this location.

MARC 1 traversing rural Bradford County, PA near Foster Branch, a tributary of the Susquehanna River. View larger version. Compare imagery from 2011 and 2012. Directions to this location.

Oil Spill Response Is A Joke