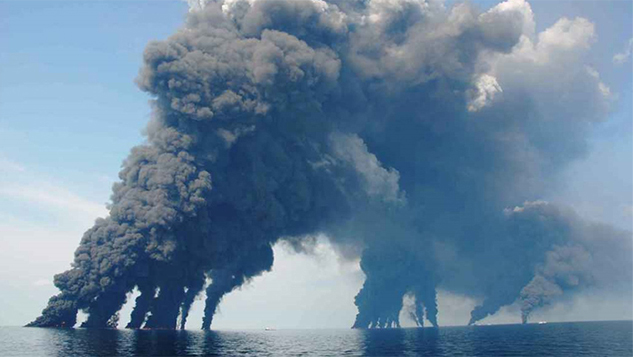 Within a day of the April 20, 2010 explosion on BP’s Deepwater Horizon drill rig in the Gulf of Mexico, we began our high tech surveillance of the spill. Examining satellite images and aerial survey data, SkyTruth quickly became a leading source of independent, unbiased information on the size and scope of the disaster.

It was the largest oil spill in the nation’s history, releasing almost five million barrels of oil into the Gulf of Mexico. As bad as it was, it could have been even worse. Had BP continued to downplay the extent of the disaster, delaying mobilization of the appropriate response, it may have taken even longer than the 87 days it took to cap the well. Our work challenged the official story, spurred government science agencies to get off the sidelines,  and opened a public dialogue about the magnitude of the risk posed by modern offshore drilling..

Throughout the spring and into mid-summer of 2010, as BP’s disabled well continued to pump oil into the Gulf, SkyTruth president John Amos was quoted in hundreds of news reports, and his interpretation and analysis of the raw imagery helped policy makers, the press and the general public make sense of events as they unfolded.

SkyTruth also played a vital watchdog role. One week after the accident, we raised concerns that the amount of oil spilling into the Gulf was likely much higher than the 1,000 barrels-a-day estimated by BP and repeated by government officials. The New York Times and other media outlets picked up the analysis published on the SkyTruth blog on April 27. The next day, government officials publicly broke ranks with BP and raised its estimate to 5,000 barrels a day, the amount we had initially calculated.

John and other independent experts kept the issue in the headlines by presenting new estimates of 20,000 and then 26,500 barrels per day as new images and data became available, leading the public to question whether BP was low-balling the spill rate. On May 4th, the company privately acknowledged the possibility that the well was likely gushing as much as 60,000 barrels of oil a day, 10 times more than the government had previously estimated.  (Later, the government’s scientific teams concluded that the higher estimate was closer to the truth; they estimated that 53,000 barrels were leaking each day immediately before the well was capped on July 15.)

While NASA and the governments of several foreign countries made their satellite images freely available, without organizations like SkyTruth to interpret those images, the public may have never known the true impact of the spill.

Equally important, we invited people directly into the conversation. Tens of thousands visited our website, blog, Twitter and Facebook pages. During the first ten days of June, for instance, our Blog received more than 70,000 visits – 25,000 in a single day. Meanwhile, our Oil Spill Tracker site, deployed on the fly in the first days of the spill, allowed Gulf residents to act as citizen journalists posting commentary and observations, as well as photos and videos of oil awash on the beaches and petroleum-drenched wildlife.

Oceanographer Ian R. MacDonald, who collaborated with the organization during the three-month Gulf spill and an earlier one in Australia’s Timor Sea in 2009, likens SkyTruth’s mission to that of “a fire truck.”

“When there’s an emergency, SkyTruth is there,” says MacDonald, a professor at Florida State University and one of the world’s foremost experts in remote sensing of oil slicks. “From the beginning of the BP spill to the end, SkyTruth was a public source of very timely raw satellite images and interpreted products, as well as a thoughtful commentary that pulled in the views of other people.”

Impact Story: Chevron Spill May Have Reset the Tone for Oil Boom in Brazil
Scroll to top