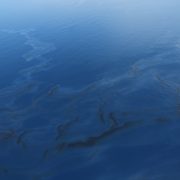 But not a very funny joke:

Thank you, Shell, for demonstrating quite convincingly over the past 4 days that oil spill cleanup is nothing more than a convenient fantasy.  At about 11am local time last Thursday, Shell reported about 90,000 gallons of oil leaked from a pipeline 90 miles out in the Gulf of Mexico in the Glider field, one of their recent cutting-edge deepwater developments in water 3,400′ deep.  Oil from wells in the Glider field flows through a single pipeline to the Brutus tension-leg platform (TLP) about 7 miles away.  Apparently this innovative “cost-effective flow assurance method” sprang a leak.  Here are a few unfortunate things we’ve learned from this:

Pipeline leak detection is unreliable. This spill was discovered accidentally by a helicopter pilot flying over the area who happened to spot the slick.  That’s right: a modern pipeline at a high-tech deepwater development project leaked thousands of gallons of oil, and that leak was accidentally discovered. Not because high-tech telemetry on the pipeline signaled an alarm due to a drop in pressure; not because flow metering detected a difference between what was going in one end of the pipe vs. what was coming out the other.  How long would this leak have continued, if not for the sheer luck of having a vigilant pilot happening by?

Oil spill response vessels grossly underperform. As of yesterday, 5 spill response vessels (4 oil skimming vessels and a work boat named the Harvey Express) were dispatched to tackle the slick as it drifted steadily west away from the source of the spill in Green Canyon lease block 248.  The first to arrive, a fast-response boat named the H.I. Rich, showed up about 11pm Thursday. Two other skimmers, Deep Blue Responder and  Louisiana Responder, arrived at 2am and 3am on Friday morning, May 13. The last one to the party, Mississippi Responder, took 26 hours to make it out to the slick, arriving at 11pm on the 13th. By that time the slick had drifted more than 30 miles away from the Glider field.

These skimmer vessels are rated to remove thousands of barrels of oily water per day: 12,500 bpd for the H.I. Rich, and a combined 39,220 bpd for the others.  At 42 gallons per barrel, that’s a total capacity of more than 2 million gallons per day for these 4 vessels.  Sounds pretty good, huh?  By noon on Sunday, based on the arrival times of the skimmer vessels that we tracked using their AIS broadcasts, more than 6 million gallons should have been collected and this 90,000 gallon oil spill should have been long gone.

Yet on Sunday the Coast Guard reported only 50,000 gallons of “an oily-water mixture” had been recovered.  Video taken Sunday during an overflight by Dr. Ian MacDonald of Florida State University with pilot Bonny Schumaker of On Wings of Care shows thick stringers of emulsified oil in a slick several miles long, similar to what Greenpeace (pics) and our Gulf Monitoring Consortium partner Jonathan Henderson (video) encountered on Saturday.  Dr. MacDonald observed that the response vessels seemed to be missing the thickest parts of the slick and were generally making very little headway, despite operating under fairly calm conditions (average wind speed of 7 knots recorded at Brutus TLP over this time period), nearly ideal for oil cleanup operations.

Federal permits for deepwater drilling rely on wishful thinking. Since the BP / Deepwater Horizon spill, companies applying to the federal government for permission to drill in our public waters are required to calculate a worst-case scenario oil spill should they, for example, lose all control of a well as BP did in 2010.  Then they must present a response plan that asserts they have the capacity and ability to adequately respond to that spill. The most recent plan [warning: humongous, unwieldy PDF file] for Green Canyon block 248, dating from 2013, envisions a worst-case spill averaging 15.3 MILLION gallons of oil per day — every day — for up to 92 days.

The response plans to match these massive potential spills rely on oil skimmers performing at their rated capacity.  Yet by noon Sunday, after two full days of cleanup response with four of these vessels and 130 workers,  only 50,000 gallons of oil and (mostly) water had been recovered, possibly even worse than the performance of an older generation of skimmers during the BP spill in 2010.  Once again we see that in the real world, these vessels don’t perform anywhere near as well as they do in the fantasy world of offshore drilling regulation.

The upshot? Our government is indulging in a troubling fantasy that is eagerly abetted by the oil industry and pro-drilling politicians, dressing up deepwater offshore drilling as a safe operation so they can continue to rubber-stamp permit applications that contain laughable oil-spill response plans. But as Shell just demonstrated, this emperor has no clothes.  When will our government and the global oil industry wake up to this reality and get serious about oil spill response?  If the BP / Deepwater Horizon spill wasn’t a disaster big and costly enough to provoke a serious overhaul, then what will it take?

On Thursday, The Senate Energy and Natural Resources Committee will hold a hearing on Capitol Hill to critique the federal government’s offshore oil and gas leasing program.  Expect to see pro-drilling politicians taking this opportunity to pound their fists and wag their fingers at government officials for not doing enough to accelerate the pace of offshore oil drilling.  You might even see a few unicorns and fairies sitting up on stage behind the politicians, nodding in agreement.

Making Headlines: We’re On to Something!

Leaving a MARC: Cutting a Swath though Pennsylvania
Scroll to top