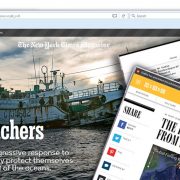 It’s been a little more than two years since we first demonstrated the Global Fishing Watch prototype in public, and the media coverage hasn’t stopped. Since launching the prototype we’ve been featured in more than 100 publications on six continents, from the Atlantic, the Wall Street Journal and International Business Times to media outlets in Russia, China, France, Argentina, South Africa, Australia and more. The attention is not only exciting, but extremely encouraging. Our Chief Technology Officer, Paul Woods, puts it this way; “The fact that you have so many people talking about Global Fishing Watch, a product that isn’t even available yet, is an indicator that there is a huge unmet need. There is a need for something that doesn’t exist yet.” In February, 2016, an article in the New York Times Sunday Magazine opened with a cinematic recounting of one particular day in our offices.

Late on a January 2015 evening in Shepherdstown, W.Va., a data analyst named Bjorn Bergman, surrounded by whiteboards scribbled with computer code, was orchestrating a high-stakes marine police chase halfway around the world.-Palau vs. the Poachers, NY Times Magazine.

The story, which focused on illegal fishing, went on to describe the coordination of an international effort to track and capture the Shin Jyi Chyuu 33, a vessel we had discovered fishing without permission in the waters of Palau. Other media coverage has included commentary in National Geographic Voices, by conservation technologist and Emerging Explorer Shah Selbe who wrote:

The methods that we traditionally relied upon (to manage marine reserves) can no longer meet these protection needs, so there currently exists a massive demand for new tools and fresh ideas. . . The Global Fishing Watch prototype looks to be a great tool, and a strong step in the right direction when it comes to ocean information.

In a feature article in WIRED, W. Wayt Gibbs wrote:

Large commercial fishers are about to get a new set of overseers: conservationists—and soon the general public—armed with space-based reconnaissance of the global fleet. . . . now environmentalists are using sophisticated technology of their own to peel away that cloak of invisibility.

In addition to filling an unmet need, as Paul described, our partnerships with globally recognized leaders Google and Oceana have helped launch us into the headlines at a time of rising awareness and excitement for protecting our ocean resources. In the past three years alone, high-profile celebrities and philanthropic organizations such as Leonardo DiCaprio, Paul Allen, the Packard Foundation and the Walton Family Foundation have collectively contributed tens of millions of dollars to ocean conservation and fisheries management. Political recognition for ocean issues has also gained momentum in recent years. In 2008, the United Nations officially recognized June 8th as World Oceans Day, and in February 2014 by President Obama established of the world’s largest fully protected marine reserve in the central Pacific Ocean.

“It’s great to see that people agree with us that this is a big deal,” says Paul, noting that it’s more than just a shot in the spotlight. We know what we’re doing is exciting, and we know it’s important, but a part of what’s so valuable about Global Fishing Watch lies in the crowdsourcing capability. Media attention like this is the best recruitment tool for users who are going to help elevate this platform to become one of the most robust resources for monitoring commercial fishing on the world’s oceans. We’re excited to see that happen. Below is a brief selection of the many articles that have featured Global Fishing Watch.

Oil Spill Response Is A Joke
Scroll to top