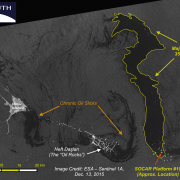 Last week we reported that heavy seas and high winds in the Caspian Sea were suspected to be the cause of a fatal accident at the SOCAR #10 Platform in the Caspian Sea. The platform is operated by SOCAR, the Azerbaijani state oil company, and is located in the Gunashli oil field approximately 65 miles ESE of Baku, Azerbaijan. Based on two radar satellite images collected since the fire began on December 4, we estimate that least 95,000 gallons of oil have been spilled into the Caspian Sea. 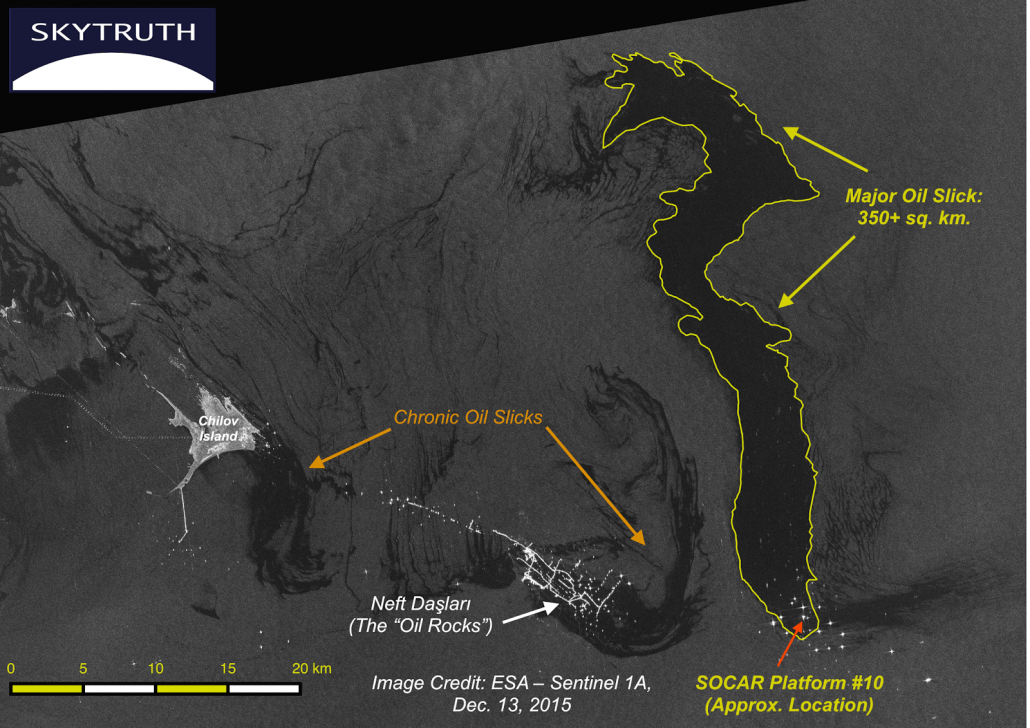 Above: The most recent image of the Gunashli oilfield reveals a 357 square kilometer oil slick. The image was collected on Dec. 13 by Sentinel 1A,, a radar satellite operated by the European Space Agency (ESA).

The slick has moved to the north since the first satellite image was collected on Dec. 7. After analyzing that first image, we identified a 192 sq. km oil slick, which we estimated contained 50,000 gallons of oil. Looking at low-resolution daily imagery from NASA, we last saw a major smoke plume from the site on Dec. 8, but continued to see a heat signature on the 7-2-1 band imagery from Dec. 12 and Dec. 15. The site has been obscured by clouds from Dec. 15 to the present.

News from Azerbaijan is, at best, hard to come by; at worst, downright contradictory. Since the disaster SOCAR has only issued two press releases on the subject in English, the most recent of which from Dec. 11 emphatically states that, “During the monitoring no signs of oil spills have been observed at the accident area.” On Dec. 16th (or 17th, the timestamps don’t match up), SOCAR has issued a press release in Azeri, and while we aren’t fluent in Azeri, regional media reports confirm that SOCAR is sticking to their story.

Even more intriguing are seemingly conflicting reports from local news website Ozu.az. The Russian language version of the article appears to accurately report the 300+ sq. km oil spill observed by Sentinel 1A, including a wide-frame satellite image of the smoke plume. Meanwhile the Azeri language version of the article, posted a mere 41 minutes after the Russian version went up, seems to be largely copied-and-pasted from the SOCAR press release, contains no image of the spill site, and does not appear to mention anything about Sentinel 1A or the 300 sq. km. oil spill.

Again, we’re not fluent or even conversant in Azeri (and only partially in Russian), so please check out the articles side-by-side and let us know what you think in the comments.

One thing is certain, the storm which caused this disaster was certainly a major weather event. Satellite-based sea-surface scatterometry shows the winds on Dec. 4th exceeded 40 knots (46 MPH) in the Gunashli oilfield. 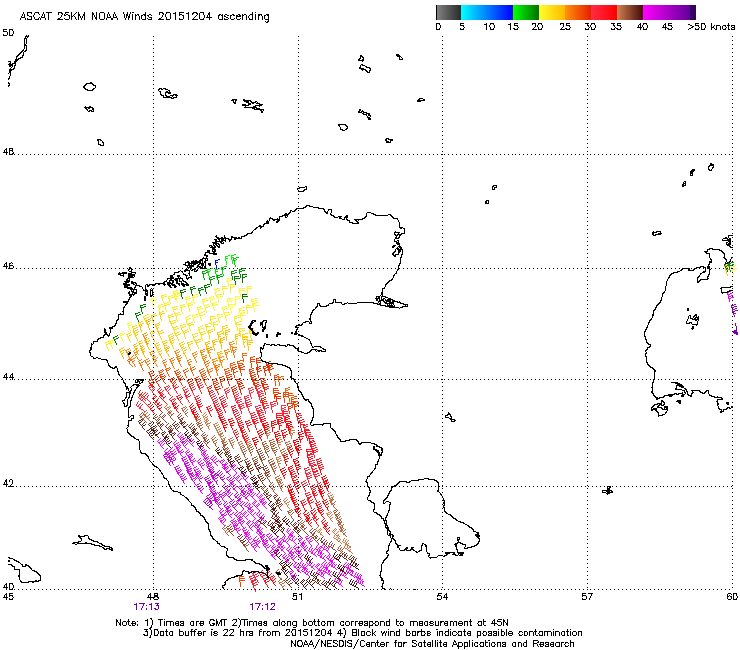 Combined with the relatively shallow depth of the oilfield (100-400 meters), it is not a surprise that this storm kicked up massive waves. Nearby, at the aging offshore settlement of Neft Daşları (the “Oil Rocks”), three workers were killed in a separate accident on the very same day (Dec. 4) when their living quarters “fell into the sea” (see also press release from SOCAR). The search continues for workers from Platform #10 who are still missing after their lifeboat was reported to have prematurely dropped from the burning platform into the raging sea.

We will continue to track this story and available satellite imagery.

Fire, Smoke, and Slicks Observed in the Caspian Sea