Catastrophic mine spills have been in the news frequently enough that we are devoting a few articles to cover some of the problems plaguing existing mines and posing serious concerns for new and proposed mines like Pebble in Alaska, Red Chris in British Columbia, and NorthMet in Minnesota. In this post we’re only covering impoundment failures from metal mines and ore processing facilities (we’ll get to coal slurry and coal ash later, and we’ve already written about abandoned and inactive mines).

The litany of mine impoundment disasters around the world is a grim one. This year saw the Fundão tailings dam failure that killed at least 13 downstream of the Samarco iron mine in Minas Gerais, Brazil.

The village of Bento Rodrigues after the Fundao dam burst at the Samarco Mine. By Senado Federal (Bento Rodrigues, Mariana, Minas Gerais) [CC BY 2.0], via Wikimedia Commons

In August 2014 it was a 24,400,000 cubic meter spill from the Mt. Polley gold mine in British Columbia, Canada into the headwaters of the Fraser River (below) only a few weeks before a run of salmon would make their way upstream. However, on Dec.17, 2015, the provincial government announced there would be no criminal charges or fines assessed against Imperial Metals for the disaster. Al Hoffman, British Columbia’s chief inspector of mines stated, “Although there were poor practices, there were no non-compliances we could find.” 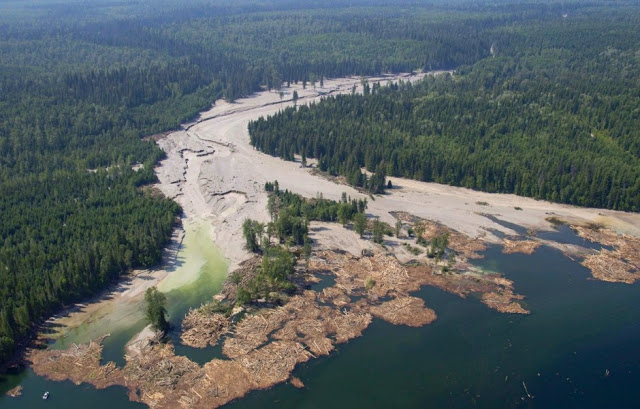 If a mine can discharge 10 million cubic meters of polluted water and toxic mine waste into the environment, turning a quiet stream into a moonscape, and yet not have broken any rules, one must wonder if the rules and/or regulators are up to the task.

Looking further back to 2010, a tailings dam failed at an alumina plant in Hungary, killing 10, injuring 150, and turning the “blue” Danube River a sickly, toxic red. A slight silver-lining, however, is that the downstream town of Devecser has risen from the sludge to become a model of green living and sustainable energy. 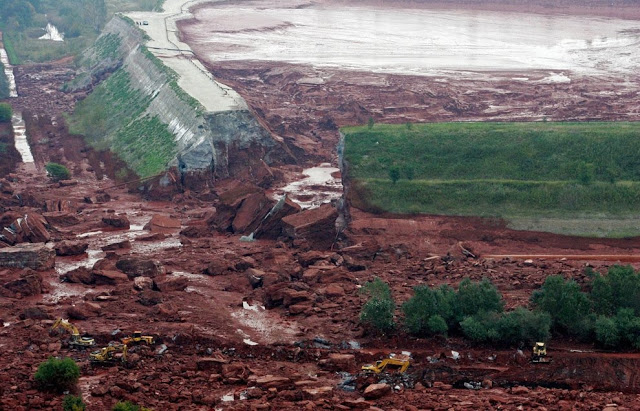 An aerial photo taken Tuesday, Oct. 5, 2010 shows the ruptured wall of a red sludge reservoir of the Ajkai Timfoldgyar plant in Kolontar, 160 km (100 mi) southwest of Budapest, Hungary. Note the excavators at bottom to give a sense of scale. Image Credit: AP Photos/MTI, Gyoergy Varga

Unfortunately, this list only recounts some of the more notorious disasters that reached the international press. For a more complete record of significant mine tailings dam failures, the World Information Service on Energy has complied a list of over 80 major non-coal spills since the 1960s.

Yet every time a new mine is proposed, even when the dam would be taller than the Washington Monument, we are reassured that this time we have the technology right, this time the dam won’t fail, and this time the environment will be left just as it was before we mined it. There are techniques, such “dry-stacking“, which are safer than conventional wet-tailings impoundments, but they are also more expensive.

So unless the public and regulators demand that mines employ better practices, it seems we will have to keep reliving this story, year after year.

Stay tuned for the next part of this series, impoundment failures from coal mines in Appalachia.

A Message From Elliott

From the Bird’s Foot to the Dogsleg: 2015 in Review
Scroll to top