On Thursday, Nov. 5 in the State of Minas Gerais, Brazil, two mine waste impoundments at the Samarco iron mine failed, burying the nearby town of Bento Rodrigues and sending 62 million cubic meters of toxic sludge downstream – impacting villages and rivers up to 400 kilometers away. So far the death toll is currently at nine, with 19 missing and 80% of the buildings in Bento Rodrigues destroyed. The mine, operated jointly by BHP/Billington and Vale SA, had increased output by 37% over the past year in spite of warnings from an independent report that the dam had design flaws that could lead to just such a failure.

Digital Globe, a commercial satellite image provider, has acquired imagery of the aftermath, which is currently being analyzed by volunteers at the Humanitarian Open Street Map Team (HOT). If you are familiar with Open Street Map, you can give them a hand. Below we have pulled together some of the before-and-after visualizations put together by regional data transparency and open mapping group– Codigo Urbano.

Above is a broad view of one of the failed impoundments and the former town of Bento Rodrigues, population ~600. Below is a closer view of a part of the town that was buried under the toxic sludge.

Finally, on the Landsat 8 imagery we’ve complied below, you can see just how far downstream the impacts go – turning the river banks orange. High levels of toxicity have been detected in water samples taken 400 kilometers downstream.

For reference, here is an annotated version of the “after” image.

Additionally, a Pleiades satellite operated by Airbus collected the following hi-resolution imagery of the disaster area. 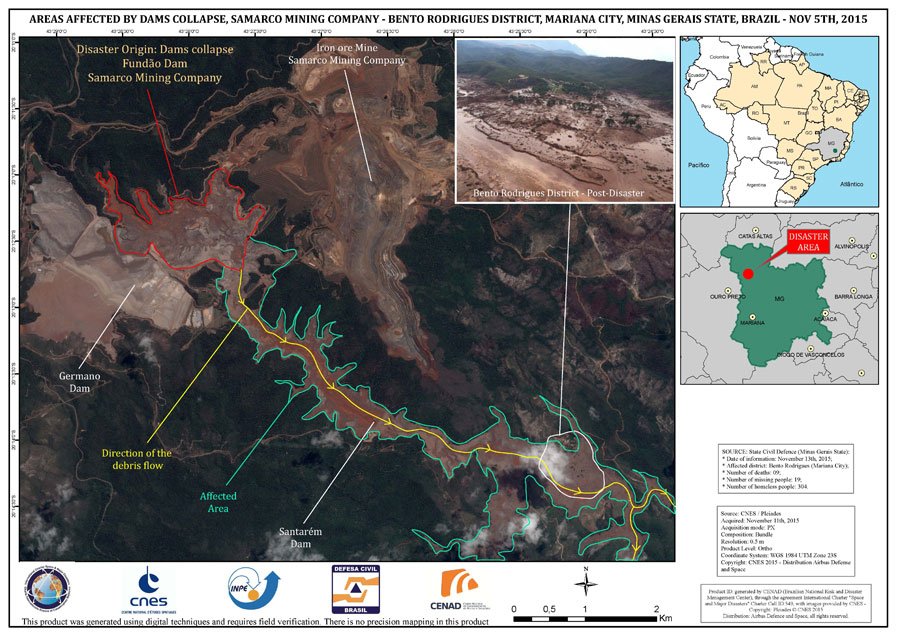 And to compare Landsat imagery, side-by-side and close-up, click the image below. 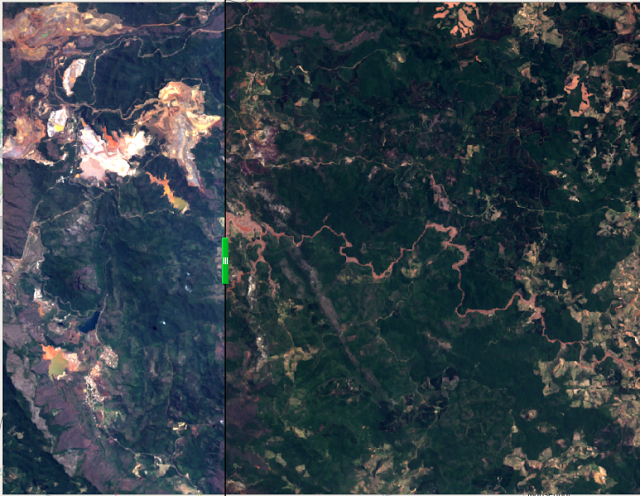 A little more than a year ago we saw a similar disaster unfold at the Mt. Polley Gold Mine in Canada. Yet, every new mine proposal (like the Pebble Mine, currently on hold but proposed for the headwaters of Bristol Bay, Alaska) assures us that modern technology and responsible mining practices will make these disasters a thing of the past. If that’s the case, why are we having déjà vu all over again?

Freaky Fracking – Mapping How Wellpads are Carving Up Ohio