Citizen-scientist analysis of aerial survey imagery from 2013, validated by SkyTruth, found 1,615 new wellpads in Pennsylvania’s Marcellus Shale (and related Devonian shales). This latest result of our ongoing FrackFinder projects brings the total to 2,724 active industrial operations that we have identified spread across the fields and forests of Pennsylvania. These numbers are not to be confused with rig counts (which maxed out at 116 in 2011 and 2012) or the total number of shale wells drilled in William Penn’s woods (over 7,788).

Because drilling rigs move around and operators often drill multiple wells from each wellpad, this count is a more accurate representation of the number of locations around the Commonwealth where land has been cleared, pipelines have been laid, impoundments have been built, water and chemicals have been trucked in, and equipment has been assembled to drill and frack one or more wells.

By itself this data might not be much different than what you could generate from looking at permit data and when drilling began, but we have included this phase in all our FrackFinder projects so that we can be sure we are looking at all the right places. Sometimes permit data is backlogged and a dataset you download today may not reflect everything that is happening in the real world. Additionally, having several years of crowdsourced image analysis data will enable us to do some nice comparisons to see how accurate state data are, as well as check the accuracy of our citizen scientists. 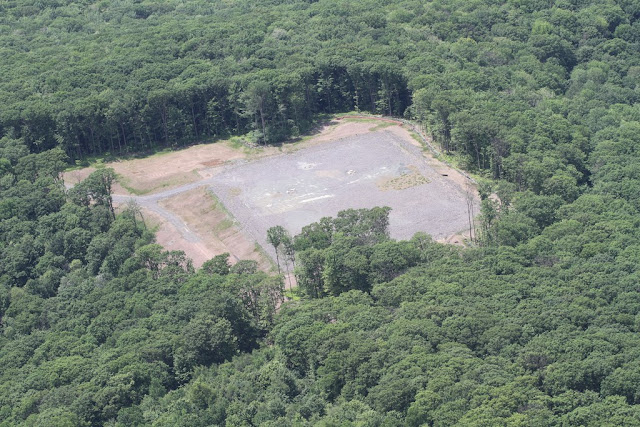 Wellpad in a Pennsylvania State Forest in 2012. Credit: Bill Howard, The Downstream Project via LightHawk

To provide some context for all those points on the map, check out these aerial photos from our parters at the Downstream Project. Wellpads are typically 3-5 acre gravel parking lots surrounded by roads, impoundments, pipelines, and other related infrastructure. In high-density drilling areas, or areas with a lot of steep terrain, these sites can occupy 15-20 acres of interconnected industrial activity. Ultimately, we are doing these studies so that we can better understand the public and environmental health implications of living near these operations.

Stay tuned for news about a new FrackFinder project coming up for a brand new state (Hint: It’s a very mountainous state and the only one in the Union with this cardinal direction of the compass in its name).

Mapping Inactive Metal Mines Across the US