Late in the afternoon on July 14, an investigative journalist from the Associated Press (AP) informed SkyTruth that over three months of research, behavioral analysis, and satellite vessel tracking had culminated in photographic evidence of a refrigerated cargo ship receiving transshipments at sea from fishing vessels believed to be crewed by slave labor.  [UPDATE: On August 12, the Silver Sea 2 was seized and brought to shore by the Indonesian Navy, pending further investigation.]

Detail from WorldView-3 satellite image showing two fishing trawlers tied up to the refrigerated cargo vesselSilver Sea 2 in the waters of Papua New Guinea on July 14, 2015. The cargo holds are open, suggesting that the ship is receiving catch from these trawlers implicated in slave labor.  Credit: DigitalGlobe/AP

Thanks to daring investigative journalism supported by data-driven intelligence from SkyTruth, the lawlessness of the high seas has recently been making major headlines. In March, the AP published the results of a year-long investigation that revealed slave-caught seafood in the supply chains of major American supermarkets. Their stories traced the repatriation of one Myanmar fisherman after 22 years separated from his family, and prompted the rescue of hundreds of migrant fishermen from captivity on remote Indonesian islands. Last month, in a tour-de-force of international journalism, the New York Times exposed the contemptible track record of the Dona Liberta, a name-changing, flag-switching cargo ship that we observed spilling oil off the coast of Angola back in 2012. The Times investigation also explored slavery, murder, and poaching on the high seas in their four-part series The Outlaw Ocean.In April, SkyTruth began monitoring more than half a dozen vessels suspected to be involved in the trafficking and enslavement of Burmese migrants on fishing boats working the sea off Southeast Asia.

Through careful analysis of satellite-derived vessel location data over a six-month period, we were able to help the AP acquire the satellite image above, capturing an apparent transshipment at sea, where fish are transferred from one vessel to another. Many of the fishing vessels we are interested in are exempt from broadcasting their location via the Automatic Identification System (AIS), but because they stay at sea for months at a time, must regularly offload their catch to refrigerated cargo ships (also known as “reefers”) like the Silver Sea 2. For safety reasons, large ships including reefers are required by international law to broadcast their identity, location and speed via AIS, giving us a way to catch a glimpse of the shadowy world of transshipments at sea.

For three weeks the Silver Sea 2 lingered in a region of Papua New Guinea’s Exclusive Economic Zone (EEZ) called the Dog Leg. During this time, the reefer stopped broadcasting its location and was presumably receiving shipments of seafood from trawlers operating in the area. On May 17, the Silver Sea 2 turned its AIS transponder back on and headed west, destined for Indonesia and Thailand. Looking back in time, we found evidence of two other Silver Sea reefers making this same circuit. Armed with intelligence that revealed a predictable pattern, our team was optimistic that we might be able to get a satellite snapshot of the “Dark Fleet” that was offloading fish to the Silver Sea reefers.

Intentionally collecting a high-resolution satellite image of a fishing boat underway at sea is difficult. Transshipments, however, are another story:  reefers are stationary, or moving very slowly and predictably, for hours to days at a time while they receive catch from vessels in the area. There is still a possibility that clouds could obscure the target, or no fishing vessels are alongside at the moment the satellite flies overhead, but the odds of success are better. 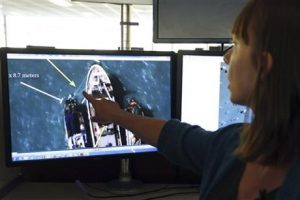 On July 13th we notified AP that Silver Sea 2 was returning, following the same pattern we observed in April. Another Thai reefer, the Sea Network, was also anchored in this coastal transshipment area. With two reefers likely transshiping catch, the time was ripe to go for it. Later that day, the WorldView-3 satellite collected an image of Silver Sea 2 rendezvousing with two vessels believed to be part of the slave fleet previously operating out of Benjina.

The Silver Sea 2 is now well under way toward Thailand, but news of this transshipment being spotted by satellite appears to have prompted authorities step up their efforts. Another Thai cargo ship, Blissful Reefer, has been detained and eight more fishermen have been freed from purported slavery at sea.