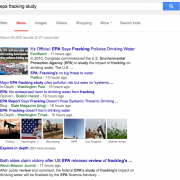 UPDATED – Dec. 2, 2016: Documents obtained by journalists at Marketplace and APM Reports found that officials made eleventh-hour edits to downplay the risks of fracking. Earlier this year the EPA Science Advisory Board also criticized these top-level conclusions and called on the EPA substantiate their claims or consider revising the report. Also, replaced broken link to EPA press release.

Yesterday, the U.S. Environmental Protection Agency (EPA) published a series of draft reports on their findings from five years of research and literature review on the question of whether or not fracking contaminates groundwater. But if you just read the headlines you might have been confused about
what the EPA had actually concluded. As Forbes pointed out, the headlines were a bit contradictory. 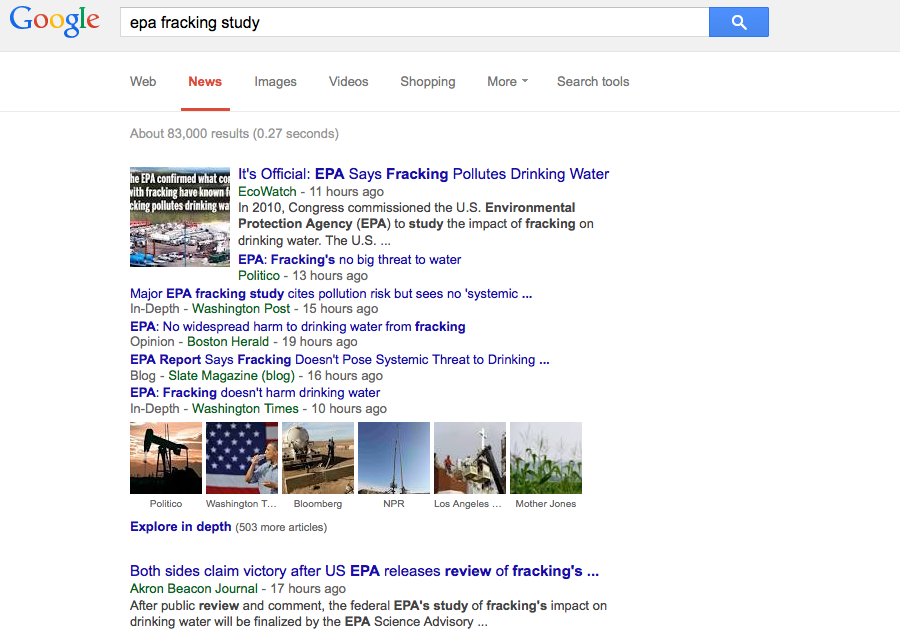 But the bigger news is that even EPA was inconsistent about the findings of their own report. The press release from EPA states that their assessment (emphasis added):

However, the Executive Summary of the report puts things differently (emphasis added):

We did not find evidence that these mechanisms have led to widespread, systemic impacts on drinking water resources in the United States.

These two statements may look similar, but there is a big difference between saying that you did not find find any evidence of a crime and definitely claiming that you have proven the suspect’s innocence. But try telling the House Natural Resources Committee that fracking has never been proven NOT to cause contamination, and members of Congress will laugh aloud and joke about pigs not flying to Mars. Seriously (check out 1:12:10).

But buried on page 22 of the 28-page executive summary, the EPA goes on to say (again, emphasis added):

This assessment used available data and literature to examine the potential impacts of hydraulic fracturing from oil and gas on drinking water resources nationally. As part of this effort, we identified data limitations and uncertainties associated with current information on hydraulic fracturing and its potential to affect drinking water resources. In particular, data limitations preclude a determination of the frequency of impacts with any certainty.

So in short, the EPA didn’t find proof of wide-spread contamination from fracking, but they lack the data to say with any certainly whether that means anything at all. At least they acknowledged that they found “specific instances where one or more mechanisms led to impacts on drinking water resources, including contamination of drinking water wells.” Which is actually big news coming from an agency which had previously stopped short of such a conclusion.

Unfortunately, this contradiction between headlines from the EPA PR office and the finely-nuanced findings of the EPA scientists just underscores a point we made by in 2013. Word games are still misleading the American public about fracking, and “…[w]hile cases of contamination caused by fracking remain obscured by lack of information and tricky linguistics, we know that a growing number of citizens are reporting harm and environmental contamination in unconventional oil and gas fields, and especially from wells that have been fracked.”