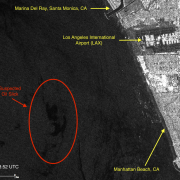 Yesterday afternoon oily globs from an unknown source began washing ashore in Southern California, prompting officials to close Manhattan Beach, Hermosa Beach, and Redondo Beach. Reports say “tar-like globs ranging from the size of golf balls to footballs began washing ashore along a six-mile stretch of coastline.” The U.S. Coast Guard has yet to identify a source, but did confirm the material was a petroleum-based product. Last week a pipeline spill of over 100,000 gallons of crude oil west of Santa Barbara dominated the headlines, so there has been some speculation that this oil came from that spill. However, thanks to satellite imagery, we believe we have found a more likely source. 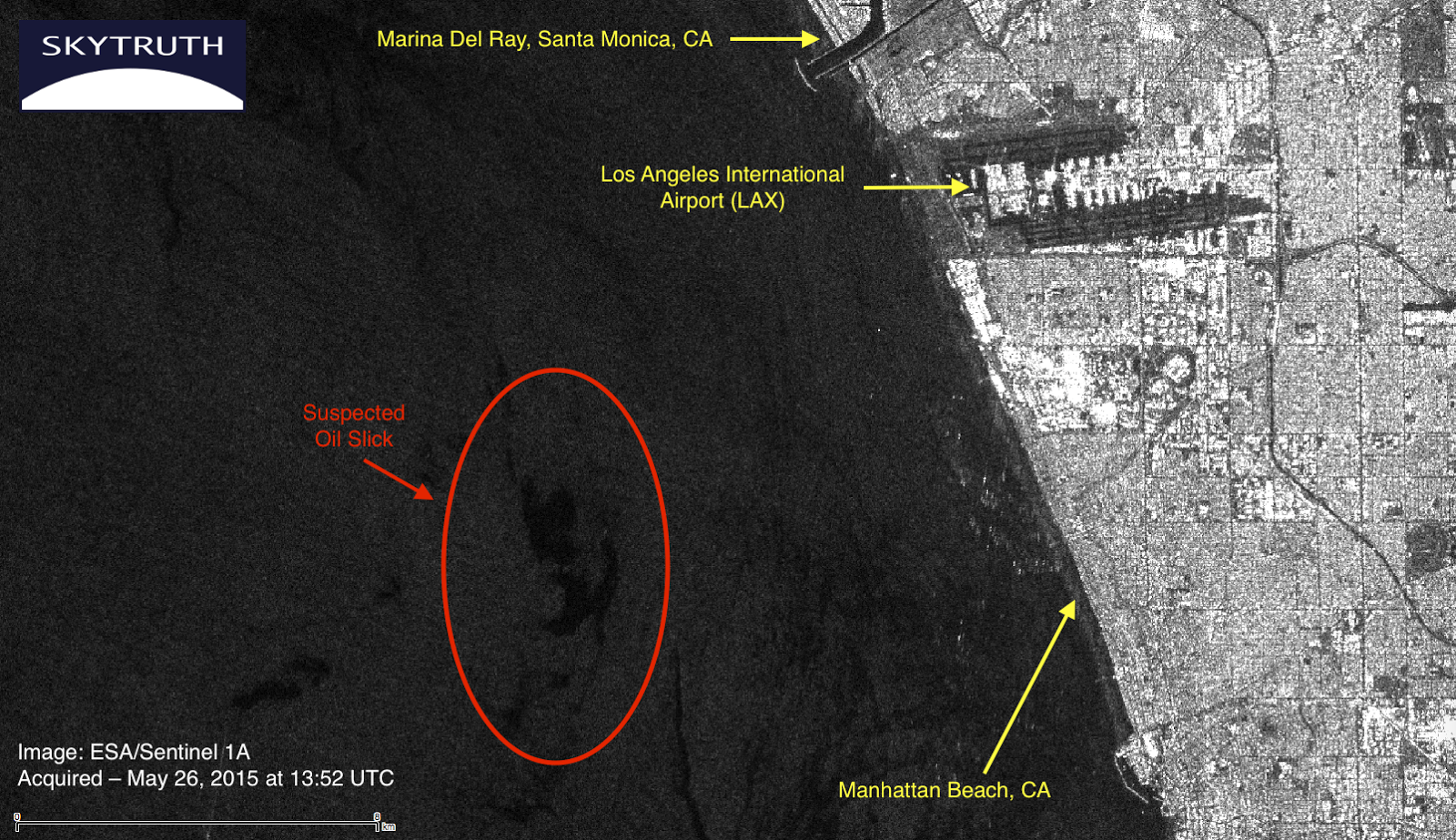 This image was collected at 6:52 am PDT on May 26 by Sentinel 1A, a radar satellite operated by the European Space Agency. Lifeguards at Manhattan Beach first reported the “tar-balls” washing ashore around 12:30 pm PDT, approximately 30 hours later. The image appears to show an oily slick only six miles west of Manhattan Beach and covering approximately 1,000 acres of Santa Monica Bay.

Sometimes we see bilge dumps from passing vessels (like this 90-mile spill off the coast of Angola), but this slick doesn’t appear to have any vessel associated with it and it isn’t the right shape. So we started looking for any infrastructure around Santa Monica that could be the source of this pollution event. That is when we found this map of the five-mile sewage outfall from the Hyperion Wastewater Treatment plant at Playa del Ray. Take a look at what the outfall pipe looks like on the bathymetry layer in Google Earth. 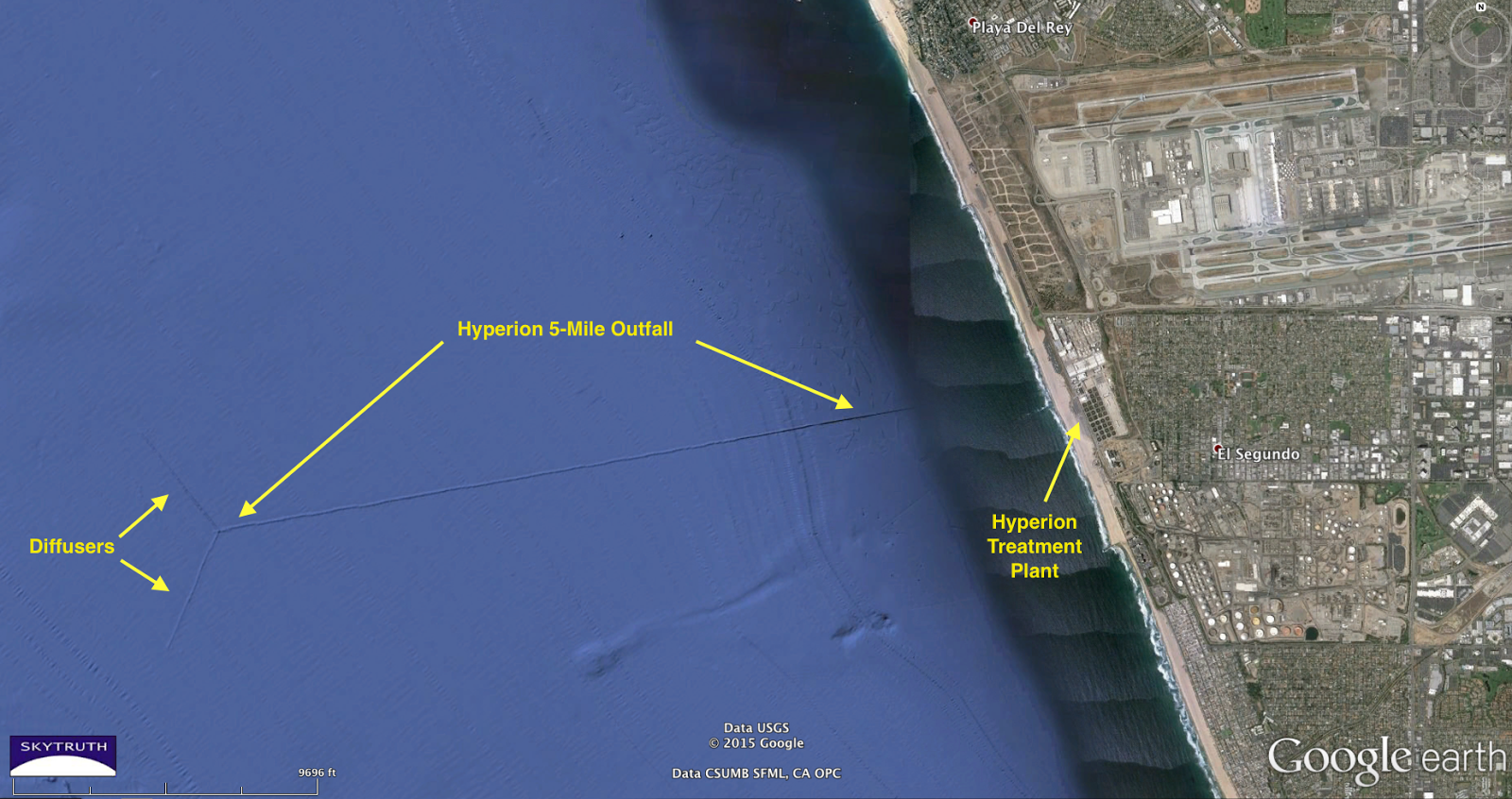 To see if this pipe might have anything to do with our suspected oil slick we digitized the outline of the Hyperion 5-Mile Outfall and brought that into QGIS to lay on top of the imagery from Sentinel 1A. 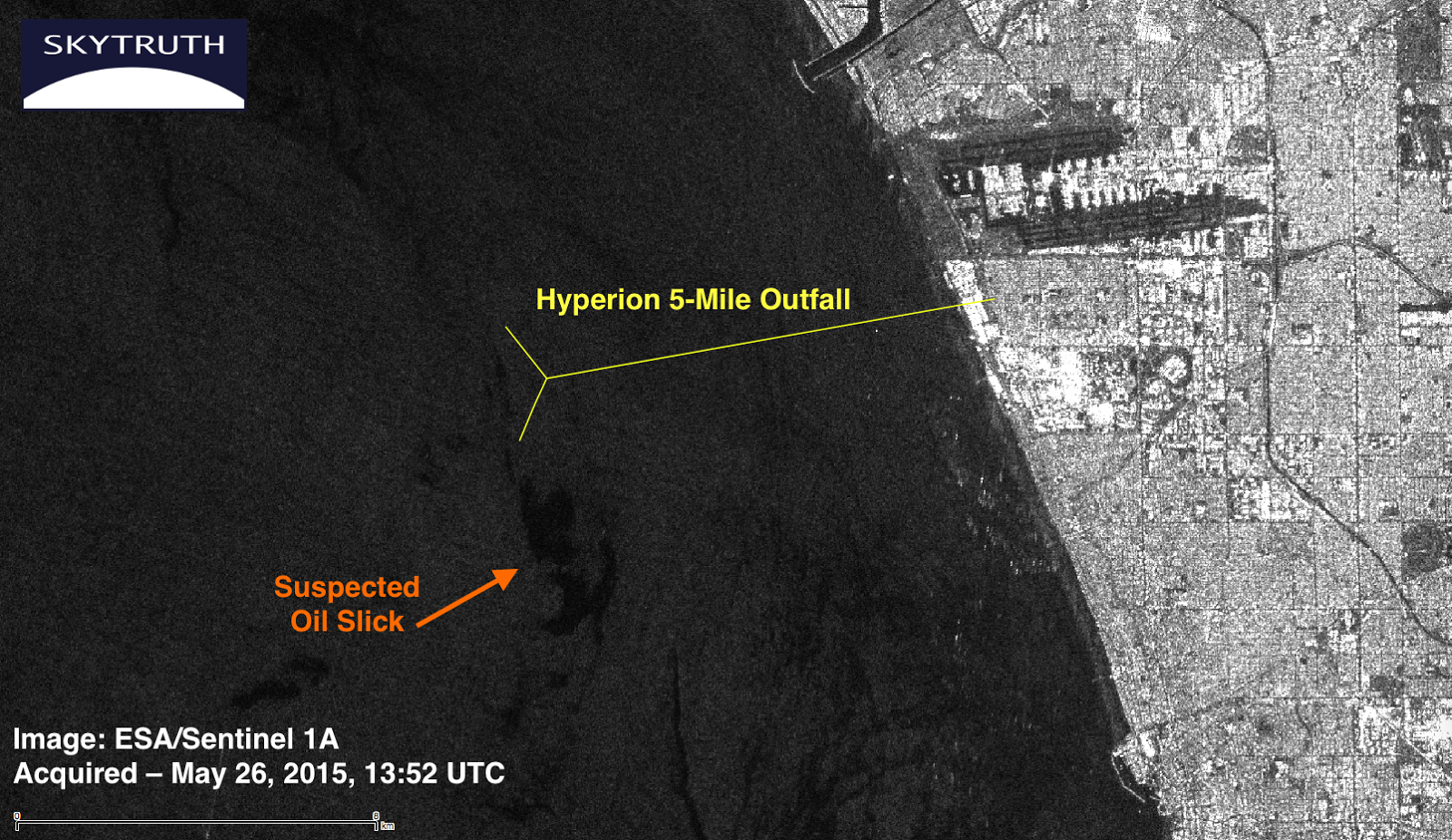 The southern diffuser leg of the Hyperion 5-Mile Outfall is less than 900 meters from the northern edge of the suspected oil slick.

Given how close the slick is to the Hyperion 5-Mile Outfall, we believe this could be a source for the contaminants washing up on Manhattan, Hermosa, and Redondo Beaches. It is not impossible that tarballs from the pipeline spill at Refugio Beach State Park travelled over 100 miles to wash up en mass on these beaches, but it seems less likely than a discharge of some kind from the Hyperion Wastewater Treatment plant.

Furthermore, we found more evidence which supports the notion that waste from the outfalls could reach shore given the right conditions. Back in 2006 the City of Los Angeles shut down Hyperion’s 5-mile outfall for inspection, diverting the wastewater to the shorter 1-mile outfall. Scientists at the Southern California Coastal Ocean Observing System (SCCOOS) tracked the waste from the shorter outflow pipe and modeled the behavior of the plume. Bear in mind that the animation below shows the behavior of a pollution plume back in Winter 2006 from a point-source four miles closer to shore, but you can see how it is possible that waste from the outfalls could turn toward shore and contaminate the beaches.

SkyTruth Lately Bigfoot Suffers Damaged Tendons…
Scroll to top
SkyTruth and/or its third party tools use cookies to monitor traffic in the aggregate on our websites and applications and to improve user experience. If you continue browsing, we'll assume you agree to the use of cookies. You can change your cookie settings at any time in your browser settings. Find out more in our privacy policy.