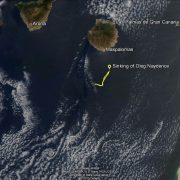 Ten days ago, a big Russian fishing trawler, the Oleg Naydenov, caught on fire in port in the Canary Islands.  Spanish authorities had the burning vessel towed out to sea, where it sank in water nearly two miles deep about 15 miles south of the island of Gran Canaria. El País published a map showing the strange final voyage of the Oleg Naydenov as it was towed, in flames, from port and taken out to sea.

As predicted, fuel-oil is leaking from the sunken trawler and is reportedly coming ashore on some of the tourist-haven beaches. We’re curious because the slick we see very faintly on satellite images from April 21 and 23 clearly shows the oil moving to the south, away from the islands. The cloud patterns and wind-shadow indicate very strong winds blowing to the south, which would tend to push the oil in that direction.  So it’s a bit of a mystery to us where the oil is coming from, that is washing ashore now on Gran Canaria.  Check out the sequence of images below.

This vessel has a back story. In early 2012 it was busted for fishing illegally in the waters off Senegal, apparently multiple times, after a dogged pursuit by Greenpeace. So this oil spill could be considered part of the “collateral damage” of IUU fishing activity.

SkyTruth Receives Pearl Award at National Press Club
Scroll to top
SkyTruth and/or its third party tools use cookies to monitor traffic in the aggregate on our websites and applications and to improve user experience. If you continue browsing, we'll assume you agree to the use of cookies. You can change your cookie settings at any time in your browser settings. Find out more in our privacy policy.