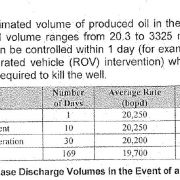 This is the week that everyone will be rolling out their “5 Years After the BP Spill” stories. Scientists  are pointing out how much we still don’t understand about the spill and its long-term impacts; environmental groups are warning that little has changed and we’re just as close to disaster now as we were on April 19, 2010; the federal government is announcing new rules to assure us that new drilling off the Atlantic coast and in the Arctic Ocean will be safe; industry is touting new containment technology to respond on the seafloor to any future loss of well control.

Some good news, some warnings that we’ve got a ways to go before we can relax when it comes to deepwater, high-pressure offshore drilling.  One of our concerns is that despite the new containment technology — which is designed to stop a runaway well if we have another scenario very similar to BP’s infamous Macondo well — we’re still inept when it comes to cleaning up oil once it hits the water. The government’s estimate is we only managed to recover, burn, chemically disperse or divert 25% of the oil that gushed from Macondo.

Why does this matter?

Because we can’t confidently predict what will cause the next catastrophic oil spill. We’re always surprised when it happens.  Maybe it will be the sinking of a fully loaded FPSO.  Maybe it will be a seafloor landslide, like the one that hit the Taylor Energy platform, that wipes out a deepwater production hub connected to dozens of high-pressure wells.  The abandonment of a deepwater well last week by Cobalt Energy is an example.  In this case, they detected the failure of a seal on the riser pipe, and abandoned drilling before the well hit the reservoir target.  Call that a successful failure, if you will. But if the well had already been in production, what would the worst-case scenario spill look like if there had been a total loss of well control?

The top-kill operation presumably envisions using one of the new well-containment “capping stack” devices.  In that scenario, where the well doesn’t naturally bridge over by clogging itself with debris, it could take 30 days to successfully kill the well, resulting in a worst-case spill of 605,000 barrels of oil.  That’s 25.4 million gallons of oil in the water.  If we’re going to continue to push into deeper water, farther offshore, with wells tapping high-pressure reservoirs miles below the seafloor, maybe we should put a lot more effort into figuring out how to effectively clean up spilled oil.

If we can’t — or just plain won’t — do that, then we shouldn’t be drilling where the consequences of failure are high.

Chronic Pollution From Offshore Drilling — How Bad Is It?
Scroll to top
SkyTruth and/or its third party tools use cookies to monitor traffic in the aggregate on our websites and applications and to improve user experience. If you continue browsing, we'll assume you agree to the use of cookies. You can change your cookie settings at any time in your browser settings. Find out more in our privacy policy.