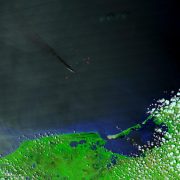 Before dawn on Wednesday morning an explosion at an offshore oil processing platform in the Gulf of Mexico lit up the sky just north of the Yucatan Peninsula. Over 300 workers were evacuated from the facility, but the explosion claimed four lives and injured 45.

Pemex, Mexico’s state-run oil company, reports that the fire at the Abkatun-A Permanente platform was extinguished late Wednesday and that there is no risk of a major oil spill. The platform involved was a processing facility rather than an oil well or drilling rig, therefore the risk of a blowout and uncontrolled oil spill should be relatively small.

This latest disaster, however, is a reminder that the Gulf of Mexico has seen two of the world’s largest accidental oil spills; the BP/Deepwater Horizon disaster in 2010 (at least 210 million gallons spilled) and the Ixtoc I disaster in 1979 (140 million gallons spilled). The Ixtoc I disaster, though widely forgotten and dwarfed by the more recent spill on the U.S. side of the Gulf, also occurred in Campeche Sound only 20 kilometers (12.4 miles) to the northwest of yesterday’s explosion. Ixtoc I was also operated by Pemex.

We have reviewed the publicly available satellite imagery from MODIS and Landsat, and so far have not observed any oil slick associated with this incident. However, on a MODIS image from Wednesday afternoon we did observe a very prominent plume of black smoke extending over 100 km (60 miles) to the northwest.

The reddish-orange spots on the near-infrared image are gas flares, a permanent fixture in this oilfield according to our global flaring map. The MODIS image from this morning is cloudier than yesterday, but the smoke plume is significantly smaller and whiter. The smaller plume is consistent with Pemex’s claim that the fire has been extinguished, or at least contained.

Checking the datafeed from the European Space Agency’s new Sentinel 1A radar satellite, we found that an image had been collected on April 1, the day of the explosion. Advanced Synthetic Aperture Radar (ASAR) is very useful for spotting oil slicks, but the dark patterns on this image appear to be small, miscellaneous oil slicks commonly observed in this busy offshore oil field. Metal objects, such as ships and oil platforms, are highly reflective and appear as bright white spots. You can easily see from the constellation of metal objects just how crowded this oil field is with ships, workboats, oil platforms, and other infrastructure.

We also took a look back in time at Landsat, and while the most recent images were cloudy, we found a clear image from February revealing what business-as-usual looks like in this shallow offshore field. Flaring is clearly visible from a number of platforms, as are small but numerous slicks.

We will continue to keep a close eye on this story as it develops, and you can too using NASA’s Worldview portal for MODIS imagery. It appears that Landsat 7 and Landsat 8 will not be in position to collect another image for more than a week. Let us know if you see anything interesting by commenting on this blog post.