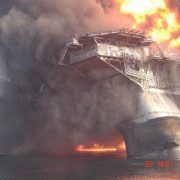 Five years ago today — Earth Day — the drifting, burning hulk of the Deepwater Horizon drill rig finally capsized and sank in water a mile deep out in the Gulf of Mexico. Eleven men had been killed and 17 injured in the explosion that had wracked the structure on the night of April 20.  We crossed our fingers and hoped the well had choked itself in debris. But soon, viscous oil began bubbling relentlessly to the surface, and what would quickly become the nation’s worst accidental oil spill, and eventually the world’s worst, was spreading inexorably across the Gulf, overpowering our pathetically feeble efforts to contain and capture the oil.

SkyTruth’s response was to independently document and measure the growing oil slick, and with help from Gulf oceanographer Ian MacDonald, challenge the unrealistically low “flow-rate” estimates coming from BP and being passed along to the public by the federal government. One positive result of that challenge was the government’s admission that it is both possible and important to measure a disaster — to know your enemy, so you can fight it to win, and be ready for the next battle. Another is the additional billions of dollars in fines that BP is responsible for, most of which will be applied to helping restore the crippled Gulf ecosystem, and the lives and livelihoods of people who depend on a clean, healthy, functioning Gulf.

Many folks have made important, thoughtful observations about the ensuing environmental, social and economic catastrophe, and what we’ve learned; Joel Achenbach and Ben Raines among them.  We can’t add much to the avalanche of “5 Years After” musings, but here are some of our thoughts as we look ahead:

Drilling is booming, and riskier than ever.  Industry is doing fine: in the Gulf, dozens of rigs are at work drilling wells in water far deeper than the site of the BP spill in 2010, drilling wells that go much farther below the seafloor than BP’s doomed Macondo well, rushing to tap the potentially lucrative but technically challenging “sub-salt” play.  As one industry observer notes, “It’s not rocket science.  Oh no, it’s much, much more complicated.”

Accidents and near-misses continue in the Gulf. For example: earlier this month, a relatively small company you’ve probably never heard of had to abandon a very expensive deepwater well they were drilling 150 miles offshore due to a mechanical failure in the riser, the pipe that connects the well to the surface. In 2012, three workers were killed in an explosion and fire on an oil platform.

The response by regulators has been slow and inadequate. Few of the recommendations of the National Oil Spill Commission have been implemented. Congress has taken little action to tighten up the oversight of offshore drilling. The Obama administration just proposed new requirements for the design, maintenance and operation of blowout preventers to beef them up, so they can actually cut through off-center pipe, but the requirements are being phased in over many years; and BOEM is only “studying” the possible requirement that BOPs be able to cut through the joints, where sections of pipe are screwed together, that make up 10% of a typical drillstring.  This remains an obvious and glaring vulnerability in our last line of defense, a one-in-ten chance of failure.

Industry has focused on winning the last war. Offshore drilling boosters claim industry has fixed the problem, but base that claim mostly on the development of a piece of hardware called a “capping stack,” modeled on the final engineering fix deployed during the BP spill that finally tamed the runaway well. These new devices are untried, but might work if we have another situation very similar to the Macondo blowout: an accessible wellhead on the seafloor, with an intact well casing.  (The capping stack would sit on the dock, useless, in a scenario like the one Chevron experienced off Brazil in 2011: a blowout beneath the seafloor).  It would also take as much as 2-3 weeks to assemble, mobilize, and deploy a capping stack for a deepwater blowout far offshore, meaning an inevitable spill of tens of millions of gallons:  BP’s Macondo well was gushing 2.5 million gallons of oil per day, and actually could have been much worse — possibly up to 4.6 million gallons per day.  Over 21 days, that’s nearly 100 million gallons of oil in the water before our first try at stopping a blowout.

And that leads to our final point for today.

We’re ignoring our staggering inability to clean up oil once it’s in the water.  The federal government requires companies to calculate a worst-case spill scenario in the event of a total loss of well control, and submit for federal approval an oil spill response plan that could effectively handle all that oil.  But the plans, which remain difficult to find, rely on the same old response methods — skimming, burning, and chemical dispersal — that woefully underperformed during the BP spill under mostly benign weather conditions.  And we still don’t know if the use of chemical dispersants is a good idea or a bad one.

Like the Exxon Valdez spill, and the BP/Deepwater Horizon disaster, our next serious oil spill may prove to be a disturbing surprise: the result of a unique combination of failures that we haven’t been able to anticipate, creating a uniquely challenging situation that we’re not prepared for.  I’d like to see a sustained national effort to reduce our dependence on oil and other fossil fuels that matches or exceeds our society’s investment in exploring for and producing those resources.  But as long as we continue to forge ahead with drilling ultradeep high-pressure wells in ever-deeper water, the very least we can do is to invest in a serious, continuous effort to improve our ability to clean up oil in the water.

Because as long as we continue to drill offshore, another major spill is an ever-present risk.

The Strange Saga of the Oleg Naydenov
Scroll to top