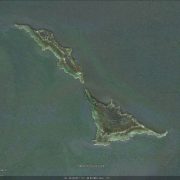 With all of the noise surrounding compensation payments made (or not) to people and businesses hurt by the BP / Deepwater Horizon oil and gas disaster, one mostly overlooked casualty of that massive oil spill has been the thin, fragile line of barrier islands that form(ed) the Gulf’s first line of defense against hurricanes, and provide vital habitat for birds and other wildlife.  These islands were in trouble before the spill, threatened by rising sea level: the gap between the north and south halves of the island was formed in 2005.  But the spill killed vegetation that helped anchor the sand in place, accelerating erosion.

Particularly hard-hit are the small islands in Cat Bay, part of the larger Barataria Bay on the west side of the Mississippi Delta in Louisiana.  Satellite imagery shows how fast this has happened:

Can Cat Island, and the other important Gulf Coast barrier islands, be saved from this precipitous decline?  Enter the US Army Corps of Engineers.  They will attempt to rebuild the island by depositing sediment dredged from the channel of the Mississippi River.  The Corps has a very uneven record where barrier islands are concerned, and the industrial Mississippi River sediments are likely to contain a variety of contaminants — a problem that has dogged other restoration projects in the region — but this may be the last chance for Cat Island.

This 30-year timelapse sequence of Landsat satellite imagery vividly illustrates the problem facing Louisiana and the nation. As the barrier islands melt away, the bays and marshes of the Mississippi Delta — hosting a vast, aging network of oil and gas pipelines and other infrastructure — are increasingly exposed to hurricanes and other severe storms. Can we fix this problem in time?

Shining a Light on Fishing: FAQ about Global Fishing Watch
Scroll to top
SkyTruth and/or its third party tools use cookies to monitor traffic in the aggregate on our websites and applications and to improve user experience. If you continue browsing, we'll assume you agree to the use of cookies. You can change your cookie settings at any time in your browser settings. Find out more in our privacy policy.