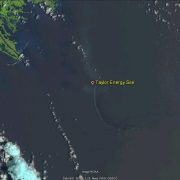 If you’ve been wondering “have they cleaned up that chronic crude-oil leak in the Gulf of Mexico from the Taylor Energy site yet?” the answer, sadly, is no.  We’re closing in on ten years of continual pollution into the Gulf from this location, with no end in sight.  So…what’s the plan?

A Landsat-8 satellite image taken on June 21 shows a slick more than 12 miles long emanating from the site:

Our friends from Florida State University visited the site on June 18 and collected photos and samples.  To their eyes, it seemed as though the leakage from the site may have gotten worse since their previous expedition.  Here are a few of their photos.  As you can see, there is some thick, brownish-orange emulsified oil in this slick: 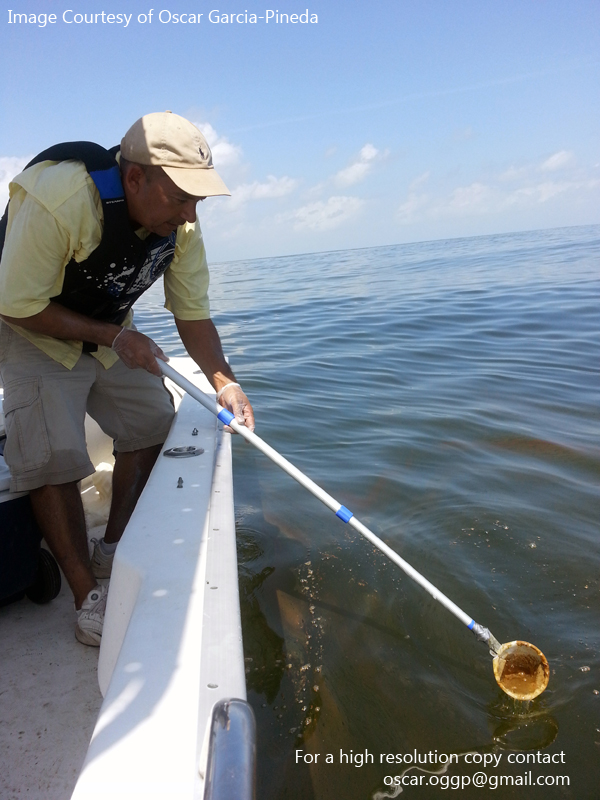 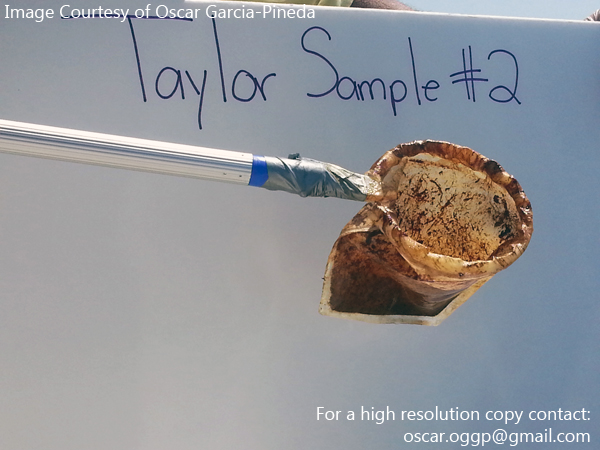 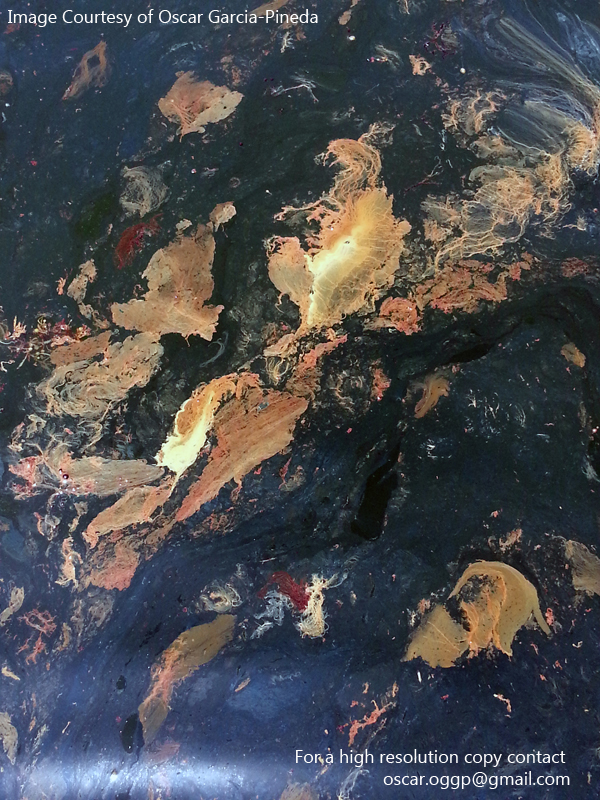 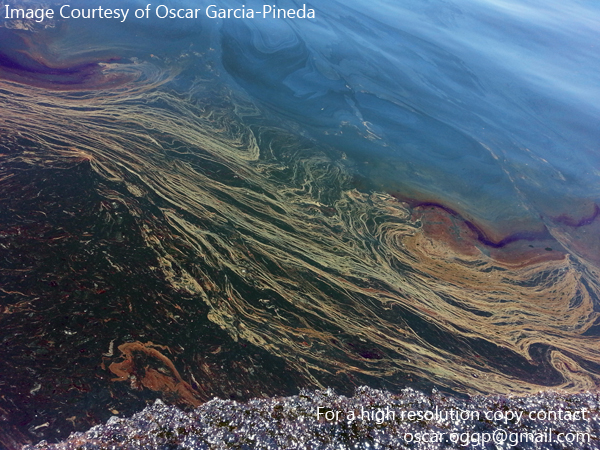 You can see more photos from this expedition, taken at sea level and from the air (flight courtesy On Wings of Care), on this video by FSU’s Dr. Oscar Garcia: 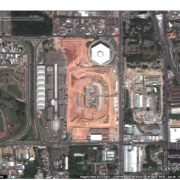 Maybe you’re an avid World Cup follower, sporting your favorite team’s colors under your work clothes.  Maybe you’re not.  Either way, you’ve probably seen something about the”greening” and “sustainability” of World Cup Brazil.  FIFA has been devoting A LOT of PR to these ideas, but even Forbes is calling some of it ‘greenwashing’.

One of the more controversial stadiums is Arena Amazonia in Manaus. Located on the Amazon River, Manaus has a population of two million people surrounded by approximately two million square miles of rainforest.  A 19th century rubber boom caused population growth in this region. Timelapse shows more recent growth in Manaus (including what looks like a new bridge or causeway) thanks to a free trade zone offering tax incentives for manufacturing.

While it is great that the stadium sports some cool green tech, as a skytruther and a soccer (ahem, football) fan, I’ve got to wonder if it was worth the impacts and construction nightmares of building it IN the Amazon.  With growing World Cup fever and recent coverage of just these issues by the Washington Post, we thought we’d “kick” things off a little early this week with “Wayback Wednesday” instead of Throwback Thursday (#TBT).

Playing soccer in the middle of the rainforest is tough (80+ degrees with 80+% humidity), but building in this region proved even tougher.  Most of the materials had to be shipped up the Amazon, and a sizeable part of the stadium was shipped all the way from Portugal.  Workers fought with high humidity that allegedly caused steel to buckle (?!) and three people died during the construction efforts.

All this for a 42,000 seat stadium that will be the home to only four World Cup games.  That’s right…nearly $300 million dollars for four games.  After that, the stadium’s will be the home of Nacional, a 4th tier Brazilian league team with an average attendance of 1,000 fans (Manaus isn’t exactly known for fanatical football culture). So like other big sporting complexes we’ve skytruthed recently, (think the Winter Olympics in Sochi) we have to wonder what the future holds for these big construction projects.

And, if you’re curious to see the stadium be sure to watch the Group of Death match between the US and Portugal on June 22nd.

Want to do some World Cup skytruthing of your own?  Check out Natal and Cuiaba! 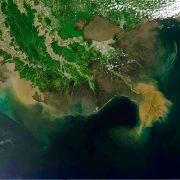 This week for throwback Thursday (#TBT) we’re heading south to check out the Mississippi Delta region.  We’re looking at the mouth of the mighty Mississippi River, sometimes known as the Bird’s Foot Delta.  This is where the river branches off in three directions and enters the Gulf of Mexico.  While it is the nature of a river delta to shift and change over time, humans make things complicated when we set up permanent residence in shifting landscapes and tamper with natural cycles. The wetlands that surround the delta act as a natural barrier, a shock-absorber if you will, to the storm surge or hurricanes and other tropical cyclones. But between levees starving these marshes of sediment, and the impact of thousands of miles of canals servicing oil and gas wells across the coast, the Delta is shrinking.

The canals allow saltwater to intrude on the marshes which should be brackish, killing vegetation and accelerating erosion. Because this increases the flood risk to the region, the Southeast Louisiana Flood Protection Authority – East  filed a lawsuit last year against 97 oil and gas companies. Our partners in the Gulf Monitoring Consortium have been working to document these impacts, but this week Louisiana governor Bobby Jindal signed a bill blocking the board from pursuing their case and other so-called “frivolous lawsuits.”

SkyTruth is not the first to see these changes in Google’s Timelapse, you can see other investigations and learn more about coastal erosion here and here.

As always, feel free to share your findings with us on Facebook or Twitter.
https://skytruth.org/wp-content/uploads/2014/06/Mississippi-Runoff-into-the-Gulf.jpg 1115 1487 Kristy Cherry /wp-content/uploads/2016/08/test_logo.png Kristy Cherry2014-06-12 19:40:002019-02-14 10:23:43Timelapse: The Shrinking Mississippi Delta
[As of October 28, 2014 NRC data is being regularly updated at http://www.nrc.uscg.mil, typically on Monday. Download the “2014 Reports” file which should include all 2014 reports through the preceding Monday.] [June 9, 2014 – Shepherdstown, WV] An environmental conservation and mapping group is hosting an updated database of the most recent federal pollution reports until public access to the designated source is restored. West Virginia-based SkyTruth tracks pollution and environmental issues through remote sensing and big data such as this nationwide pollution report database from the U.S. Coast Guard’s National Response Center (NRC) for oil and hazardous materials spills.

Public access to data from the NRC has been offline since February 21, 2014, reportedly due to an extensive rebuild required to comply with new federal cyber-security requirements. NRC officials told SkyTruth it could take up to a year to fully restore the website, but in the interim their staff would provide a weekly update containing all the pollution reports received during the calendar year at an alternate website.

Our staff is working to incorporate these changes into the SkyTruth Alerts system to restore regular, automated email notification of pollution incidents to Alerts subscribers.

Anyone witnessing an oil spill, chemical release, or maritime security incident can report it by calling the NRC hotline at 1-800-424-8802

This week for throwback Thursday (#TBT) we’re looking at gold mining in the Madre de Dios region of Peru.  If this sounds familiar, then bonus skytruther points for you because we did in fact write about this region last fall. A recent crackdown on illegal mining inspired us to give this region another look, and show you what it looks like through the lens of the Google Timelapse. What you’ll see in this part of the Amazon is rapid mine development over the years and sediment-laden runoff from the mines and deforested landscape infiltrating surrounding waterways. Feel free to zoom in and do some exploring of your own.

On April 19th the Peruvian government took action against illegal mining in this region and halted the shipment of gasoline to the Madre de Dios area.  Troops were also sent to destroy any heavy machinery that could have been associated with illegal mining activity (if the miners in the region really look like their statue in the Huepetuhe town square, those must have been some seriously strong troops).  In the wake of the government’s intervention the region has gone bust and the mayor of Huepetuhe estimates that approximately 22,000 people have left town, leaving only 3,000 in a serious state of transition.

Over the years, small-scale ‘wildcat’ mining reached staggering proportions in the region, causing obvious damage to one of the most biologically diverse places on Earth.  Deforestation, mercury contamination and sediment-laden runoff are just a few of the major concerns facing this environment.