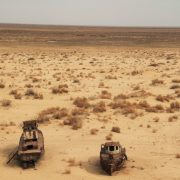 Today for Throwback Thursday (#TBT) we’re checking out the Aral Sea, which is located in central Asia near Kazakhstan. This was one of the world’s largest saline lakes. In the 1960s that all began to change as rivers that fed the lake were diverted for Soviet irrigation projects to boost cotton production. Since then the lake has shrunk by some 70% or more, thought is has seen a little recovery due to a dam built to raise the level of the lake enough to support native fish once again. However, it may never return to its former glory unless massive changes are made to management of water from sources like the Amu Darya River. Since the 1960s, the Aral Sea has lost 90% of its source-water, which begins as snow in the Himalayas.

Google-powered Timelapse won’t take us all the way back to the 1960s, but it will allow us to see SIGNIFICANT change from 1984 – 2012. Go ahead and zoom in for a closer look.

The sea shrinkage has ruined a once-thriving fishing economy, but it’s also left salt-flats infused with pesticides from years of agricultural runoff. The winds then pick up and blow the toxic dust near and far, plaguing residents with health troubles like cancer.

Want to do some skytruthing of your own?  Head over to google-powered Timelapse and “Explore the World.”

Timelapse: The Writhing Brahmaputra River
Scroll to top
SkyTruth and/or its third party tools use cookies to monitor traffic in the aggregate on our websites and applications and to improve user experience. If you continue browsing, we'll assume you agree to the use of cookies. You can change your cookie settings at any time in your browser settings. Find out more in our privacy policy.