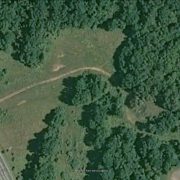 Not only is there new high-resolution aerial survey photography available for Pennsylvania — allowing us to begin a major update to our ongoing FrackFinder project — there is also 2013 imagery now in Google Earth for the Shepherdstown area, so we can take a look at some of the changes that have happened in our own neighborhood since the previous aerial imagery was taken.

Here’s one thing that caught my eye: some tree-clearing and what appears to be fill activity taking place in a wooded area on the southwest side of town (see it in Google Maps). Anyone know if a permit has been issued for this work?

I also took a look at the nearby Potomac Farms mulching operation, just across the bypass from the area shown above. This site has been an ongoing concern for some local residents because of noise, dust and other hazards occurring in close proximity to their homes:

The 2013 imagery for this site is not yet available in Google Maps, which still displays 2010 imagery for most of the mulch operation.  So do yourself a favor and get Google Earth, so you can see the latest imagery, toggle back through historical images, make exact measurements of the distances between places, and make your own custom maps. And if you see anything else interesting in our area, please let us know!

Timelapse: Urban Growth off Doha, Qatar
Scroll to top
SkyTruth and/or its third party tools use cookies to monitor traffic in the aggregate on our websites and applications and to improve user experience. If you continue browsing, we'll assume you agree to the use of cookies. You can change your cookie settings at any time in your browser settings. Find out more in our privacy policy.