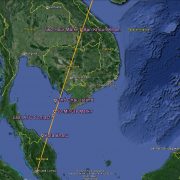 Some folks have been asking us if we can help find the Malaysia Airlines jetliner that disappeared early into a flight from Kuala Lumpur to Beijing.  Many news reports state the Boeing 777 vanished from radar “about 2 hours” into the planned 6-hour flight to Beijing, but that would have put the jet well over land, near the city of Ban Khoun Kham in the rugged terrain of southern Laos (see our admittedly simple map-based calculations below).

A BBC News report gives more precise timing (thank you, BBC!).  Flight MH370 took off at 16:41 GMT on Friday, March 7 (that’s 41 minutes past midnight, early Saturday morning local time).  The last contact with air traffic controllers was about 50 minutes later, at 17:30.  Based on a Malaysia Airlines route map from their website, and a scheduled travel time of about 6 hours, we think that last contact occurred about 83 nautical miles west-southwest of the tip of Vietnam, in the mouth of the Gulf of Thailand. That’s not far from where a couple of small, orange-tinged, possible oil slicks were sighted, although samples of those slicks reportedly did not match the jet’s fuel. It’s also roughly where airline officials placed the last contact with air traffic controllers, described as being about 120 nautical miles from the coastal Malaysian city of Kota Bharu.

So, we searched the free archive of low-resolution, twice-daily NASA/MODIS satellite images for this area, to see if anything useful might turn up.

Short answer: as far as we can tell, no.

Images for the past few days are somewhat hazy and cloudy, particularly the Terra image taken at 2:50 GMT on March 8, about 8-1/2 hours after controllers lost contact.  The March 8 Terra and Aqua images also suffer from big gaps in coverage that unfortunately fall right over part of the expected flight path out of Malaysia (gaps in MODIS coverage are not at all uncommon, so conspiracy theorists, take a deep breath). Strong sets of jet contrails are visible on the images from March 8 and March 9, but those are well offshore and parallel to the east coast of Vietnam, and long after Flight MH370 left Kuala Lumpur.

One of the last MODIS images taken BEFORE Flight MH370 took off is a Terra image captured at 03:50 GMT on March 7, about 13 hours before departure. I’ve included this because it shows a few small oil slicks in the Gulf of Thailand. One is clearly bilge-dumping from a passing vessel, something that is unfortunately common in the waters around Vietnam, as our work with radar satellite images has shown.

Radar imagery would be very helpful for this search, because it’s much better able to show small oil slicks than this low-res MODIS stuff.  But, because NASA doesn’t operate a radar imaging satellite, we have to buy radar imagery from other sources; and the odds of an image having been acquired in the right place and time to be helpful in this case are pretty slim.  But if anyone knows otherwise, please chime in with a comment or send us an email.

Satellite Image Anomaly in Gulf of Thailand
Scroll to top
SkyTruth and/or its third party tools use cookies to monitor traffic in the aggregate on our websites and applications and to improve user experience. If you continue browsing, we'll assume you agree to the use of cookies. You can change your cookie settings at any time in your browser settings. Find out more in our privacy policy.