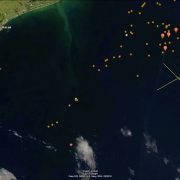 Sharp-eyed Teri was looking at MODIS/Aqua satellite imagery of the coast of Brazil taken on December 31, and spotted what looks like a long plume of smoke out in the Atlantic Ocean about 70 miles from shore, in an area of very active oil drilling and production known as the Campos Basin.  She downloaded the “nightfire” data from VIIRS, a sensor on the Suomi-NPP satellite that we use to detect fires and other nighttime illumination, and overlayed it on the MODIS image.  Detected fires are shown as red markers. Oil platforms (data from 2011) are shown as small orange dots:


The smoke plume appears to emanate from a point about 2.7 miles north-northeast of Petrobras Platform 51, a big semisubmersible rig in the Marlim Sul field. The VIIRS data indicate the presence of a combustion source at the north end of the smoke plume, and estimate it’s temperature is 1800 degrees Kelvin — this is extremely hot, hot enough to soften steel.  The plume visibly extends to the south for at least 146 miles.

It’s possible this is just an unusually vigorous gas-flaring event, but we don’t see comparable plumes of smoke from the many other flares detected in the area.  We haven’t heard anything but are concerned there may be a fire at a platform or drill rig working at this location.

If you have any news, please let us know by commenting on this post and/or emailing us (info@skytruth.org).