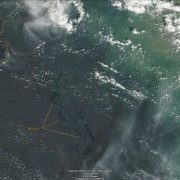 [UPDATE October 9, 2013 – This news article indicates the reported pipeline spill actually occurred on the coast, not offshore. So now we’re not sure what was the source of the extensive slicks on the MODIS satellite images.]

This morning we saw a brief news report noting that Indian authorities reported a “small” oil spill from an offshore pipeline off the coast of Mumbai.  This pipe carries oil ashore from one of India’s largest producing oil fields, the Mumbai (Bombay) High field.  It’s not the first time this pipeline has had problems.

This MODIS/Terra satellite image taken on October 8, 2013 clearly shows oil slicks in the Arabian Sea scattered throughout a 66-mile-long northwest-trending belt ranging about 50 to 100 miles offshore.  We don’t know for sure if these slicks are related to the pipeline spill.  We’ve seen smaller slicks in the area in the  past, from other causes.  But these slicks seem to be generally in the right area to correspond to this recent pipeline problem, and their alignment is compatible with the wind blowing from the northwest.  If anyone can provide an accurate latitude/longitude coordinate for the exact location of the pipeline failure, that would be very helpful.

If these slicks are all attributable to the pipeline failure, we don’t think this was a “small” oil spill as reported by an unnamed company official:  the two largest patches of slick at the northwest (upwind) end cover a total area of about 324 km2.  Assuming a conservative minimum average slick thickness of 1 micron, those two patches amount to about 85,500 gallons of oil.  The US Coast Guard classifies that as a “medium” sized oil spill.  If the stringy, scattered area of slicks at the southeast (downwind) end are added in, the amount likely exceeds the 100,000-gallon threshold for being classified as a “major” offshore oil spill.

The MODIS/Aqua image taken on October 7 also shows these slicks, although they are partly obscured by clouds.

National Response Center – Down, But Not Out
Scroll to top
SkyTruth and/or its third party tools use cookies to monitor traffic in the aggregate on our websites and applications and to improve user experience. If you continue browsing, we'll assume you agree to the use of cookies. You can change your cookie settings at any time in your browser settings. Find out more in our privacy policy.