NASA Earth Observatory image modified by SkyTruth
Blog - Latest News
You are here: Home1 / Biodiversity2 / 2010 BP Spill in Gulf of Mexico – How Big Was It? 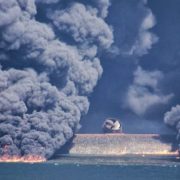 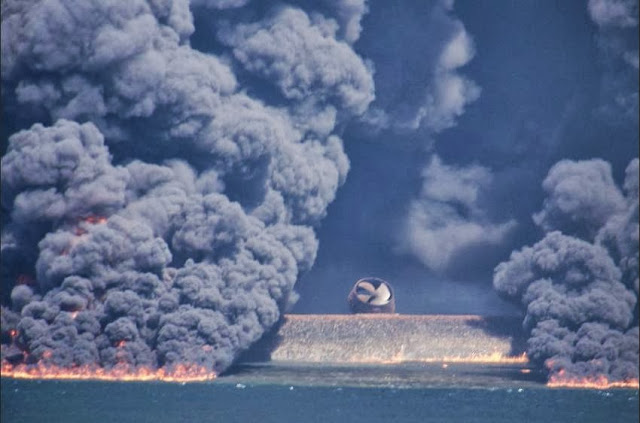 A judge in New Orleans is now pondering a big-money question: how big was the 2010 BP oil spill?  Exactly how much oil gushed into the waters of the Gulf of Mexico throughout the relentless summer of the BP / Deepwater Horizon oil (and gas) disaster?  The Summer of Spillcam?

Despite the government shutdown, lawyers from the federal Department of Justice are duking it out in court against a team of BP attorneys.  At stake: billions of dollars in fines levied under the Clean Water Act, which are calculated based on the amount that was spilled.  The feds say BP spilled 4.2 million barrels (176.4 million gallons); BP says it was much less, about 2.45 million barrels (102.9 million gallons).  If the judge rules that BP has to pay the full $4300 fine per barrel for gross negligence, that’s a whopping difference of $7.5 BILLION.  Congress passed a law called the RESTORE Act that will send 80% of the fine to the affected Gulf states, in part to conduct ecosystem restoration projects to repair damage from the spill; if BP’s lower number prevails, that’s $6 billion less for restoration work.

SkyTruth played a part during the spill to shed light on how bad it actually was.  When the Deepwater Horizon exploded in flames, we began collecting and analyzing daily satellite imagery, and publishing maps of the growing oil slick.  A Gulf oceanographer, Dr. Ian MacDonald (then at Texas A&M, now at Florida State), saw our images and slick-size measurements and suggested that BP and Coast Guard estimates of the flow-rate of oil from the well must be far too small to result in such a large and rapidly expanding oil slick. On April 27, 2010 – three days after the Coast Guard announced the Macondo well was leaking – we published on this blog our first estimate that the flow rate was at least 20,000 barrels (840,000 gallons) per day: 20 times greater than BP and the Coast Guard were saying.

Here’s a timeline of the flow-rate estimates made for the Macondo well in the first two weeks of the spill (some of the links to news accounts may no longer work).

On May 19, NOAA and the USGS convened a panel of scientists, dubbed the Flow Rate Technical Group, to measure the flow rate using several different approaches.  On May 27, more than one month into the disaster, they issued their first preliminary estimate of the spill rate.  Subsequent estimates were much greater; their final estimate was a flow rate of 62,000 barrels per day at the beginning of the spill, tapering back to 53,000 barrels per day by the time the well was finally capped on July 15, 2010.  Some, including scientists on the Flow Rate Technical Group, claim even these numbers are too low.

So watch closely. The judge will be bombarded by highly technical expert-witness testimony from both sides.  The complexity, and lack of absolute certainty with any indirect measurement technique, favors BP: it’s likely the judge will ultimately make some kind of compromise, and the final for-the-record number will be based on a mix of politics, confusion and fatigue more than on actual science.