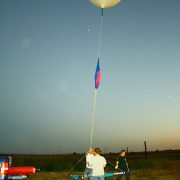 September 3, 2013 – Chicago, Illinois: In partnership with Space For All, and funded by generous support from donors all across the country, SkyTruth recently launched a mission to document natural gas flaring in North Dakota’s Bakken oil shale. We are pleased to announce that our attempt to send an instrument package over the oil fields on a high-altitude balloon was a success, and as we make our separate ways home, we are starting the long process of sifting through the 19.8 gigabytes of video, photos, and sensor data that we collected from the mission.  We recorded four hours of HD video from three GoPro video cameras before the devices froze up in the chill of the upper atmosphere, 606 still images from a small, point-and-shoot digital camera programmed to take a photo every ten seconds, and over 400,000 atmospheric readings.
Here’s how the launch went:
Preparation – Aug. 31- late afternoon, Sept. 1: We spent a feverish 24 hours assembling hardware, wiring sensors, troubleshooting software, triple-checking all recording systems, and running flight-path models which seemed insistent that the balloon flirt dangerously close to a large lake just north of the main oilfield. Finally satisfied with a favorable flight path and all hardware loaded up, we rolled out to the Lewis and Clark Wildlife Management Area on the floodplain of the Missouri River – just south of the city of Williston. 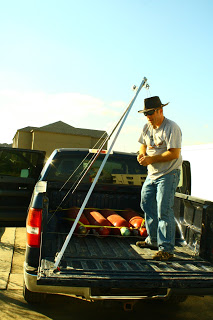 Our convoy and launch site made quite a scene, with the unwieldy triangular aluminum frame of the payload transported upright from the motel parking lot (above), four large red tanks of compressed hydrogen strapped down tight, and a spread of laptops, radios, and cameras worthy of a TV show. Locals asked us about the rig at the gas station, traffic leaving the wildlife area slowed down passing our launch site, and a curious ranger closing the gates for the day inquired about the large latex sphere billowing from the bed of our beat-up rental pickup truck. But everyone we talked to was fascinated by the idea of a weather balloon and getting to see the operation in progress. 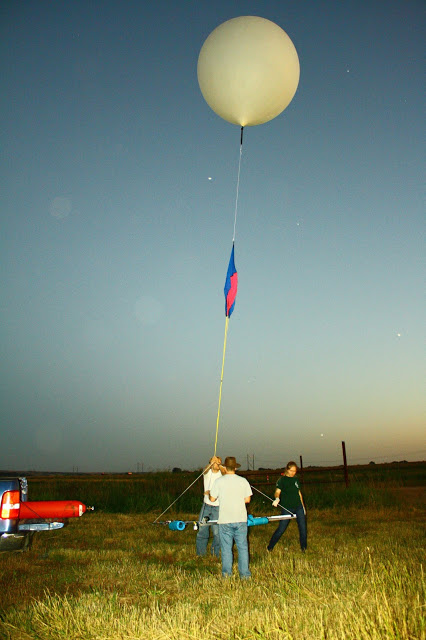 Just before launch, the balloon inflated, parachute fixed between the balloon and the payload (the balloon bursts when it reaches its maximum altitude), and the hydrogen tank to the right.
Launch – 8:57 pm CDT, Sept. 1: Astonishingly, we released the balloon a few minutes ahead of schedule, carrying our payload up into the twilight as flights of ducks splashed down in the wetlands around us and oil field traffic roared up and down US Route 84 a few hundred meters away. However, as it soared into the darkening sky, our primary radio tracking system immediately ceased transmitting its location, leaving us with only the projected flight path and our backup satellite-based SPOT transmitter to find the rig when it returned to earth. Our flight predictor estimated a 3.5 hour flight, and a drop point far outside of the active oil field, 131 miles away by road.
The Chase –  8:57 pm to 1:15 am: With the balloon away, there was nothing to do but leap in our vehicles and race to the predicted landing zone. As darkness fell, the lights of oil rigs began to stand out in stark contrast to the once quiet wheat fields and pastures. Hurrying south through Watford City, the narrow roads under construction were intimidating because of the endless stream of trucks hauling tankers of oil, loads of fracking chemicals, and oilfield equipment. To the left and right, oil rigs drilled away while natural gas flares burned brightly in the otherwise inky darkness.
Continuing run simulations from our smartphones, the winds appeared to calm down, moving our expected landing point south and west of the original prediction. The lead chase vehicle proceeded halfway between the original predicted landing point while another held back at the town of Killdeer, just north of the new predictions. During this time, the satellite transmitter predictably blacked-out, leaving us to wait a nail-biting 110 minutes for any trace of the rig.
At 12:21 am CDT, September 2, the satellite transmitter sent a new update, 36 minutes from the lead chase car, but only about 13 miles south of the original projected landing place. Both teams raced toward the latest coordinates, checking on smartphones every 10 minutes for the latest coordinates. As it gently wafted back to earth, Dan Kumor of Space For All and David Manthos from SkyTruth searched back and forth along a desolate road in the middle of pitch black fields for any sign of the payload. Upon receiving two transmissions in the same place, it became clear the rig had landed, and was only about 100 meters from the road. 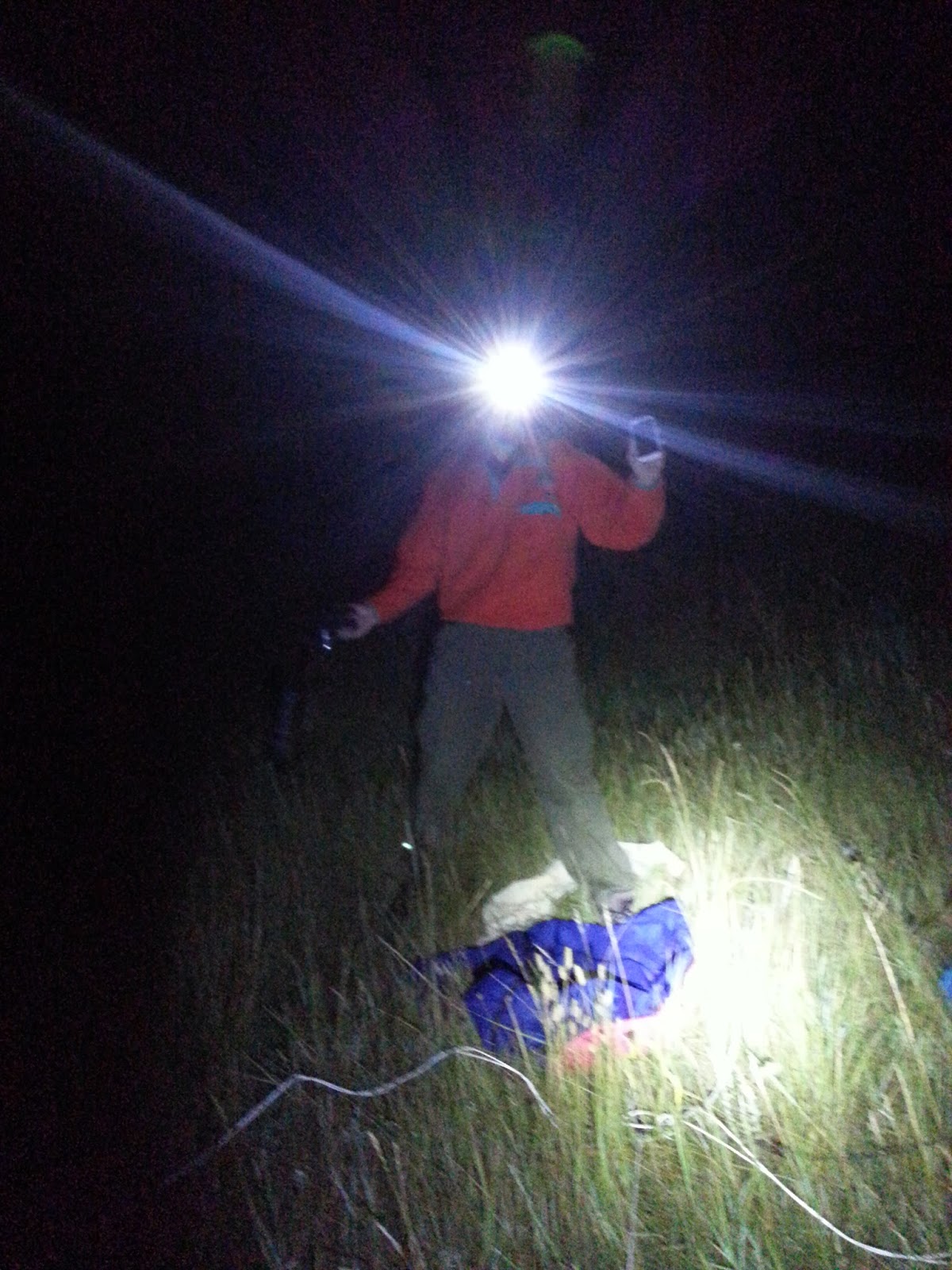 Recovery – 1:15 am, Sept. 2: Following raw GPS coordinates from a smartphone, Kumor and Manthos paced off the latitude and longitude of the transmitter’s location, wading through tall grass right up to the completely intact payload (right) in the middle of a field just south of Zap, North Dakota. Once back at the road and joined by the second recovery vehicle, we pried open the camera cases (in the low-pressure of high-altitude flight, the air even inside a waterproof case can leak OUT, making it difficult to open the now vacuum-sealed boxes). With nervous anticipation we plugged in the camera cards to see what we got.
The cameras shutoff after about an hour into the flight, but it appears we captured much of the oil field we were hoping to image. Furthermore, we found that it is indeed possible to piece together a relatively inexpensive experiment like this to get the SkyTruth view on the big picture of environmental impacts like oil shale drilling. We also successfully completed groundtruthing of numerous sites in the Bakken, validating the infrared detections we monitor from NOAA’s Suomi NPP satellite. We have mountains of data to go through, and hours of footage to process, but stay tuned for more updates and news about our final products from this mission.
Author’s note: My train departs from Chicago Union Station in 20 minutes and I have to get to the gate. Loading photos has been nearly impossible on the wi-fi here, and video would be impossible. Check back for more photos and raw footage tomorrow!

SkyTruth Launches Map to Track Oil & Gas Pollution from Colorado Flood...
Scroll to top
SkyTruth and/or its third party tools use cookies to monitor traffic in the aggregate on our websites and applications and to improve user experience. If you continue browsing, we'll assume you agree to the use of cookies. You can change your cookie settings at any time in your browser settings. Find out more in our privacy policy.