Photo by skeeze on Pixabay
Blog - Latest News
You are here: Home1 / Offshore2 / UPDATED: The Blowout du Jour – Flaming Rig in the Caspian Sea
UPDATED – August 26, 2013: Last week we posted about a blowout and fire reported at the SOCAR #90 well in the Caspian Sea. Satellite-based infrared continues to detect heat from the location, and today’s near-infrared MODIS image (below) shows yet another brilliant hot spot where we believe the flaming rig is located. News reports are extremely limited about this incident, but we are continuing to monitor this incident and have not yet detected any oil or chemical slicks on the water. 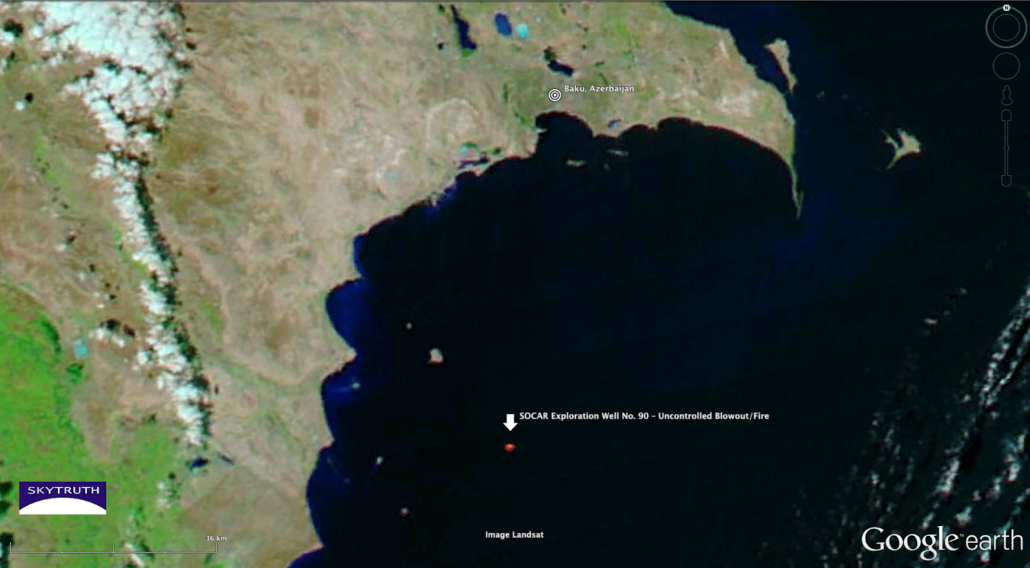 ORIGINAL POSTING – August 20, 2013: Even as discussion heats up for new offshore drilling in the Atlantic Ocean and Arctic Sea, another gas rig is blazing away, this time in the Caspian Sea. On August 17, Exploration Well No. 90 in the Bulla Deniz gas field  suffered a blowout as it neared a depth of 6,000 meters, and subsequently caught fire. Three days later, on August 20 at 22:37 UTC (6:30 PM Eastern), the Visible Infrared Imager Radiometer Suite (VIIRS) instrument on the Suomi NPP satellite continues to detect large amounts of heat radiating from the site. Clouds obscured the site on the most recent pass of the Terra satellite (MODIS), but we will continue to monitor what we can of the fire and for any evidence of oil or other pollutants on the water.
Because this is a gas well and we have not seen any slicks on previous MODIS images, we believe the risk is presently low that a major spill will develop from this incident. Unfortunately, very little new information has been forthcoming except from an Azerbaijani financial news report stating that “SOCAR decides to put out a fire…” The report, which is using a stock photo of the burning Deepwater Horizon rig, explains the commission responding to the incident was hoping to keep the well for production once the fire is extinguished. Other details appear lost in translation.
Low resolution images from MODIS reveal very little in the true color composite, but the near-infrared 7-2-1 band very clearly shows the heat of the fire, much like this rig off the coast of Nigeria that we spotted last year. 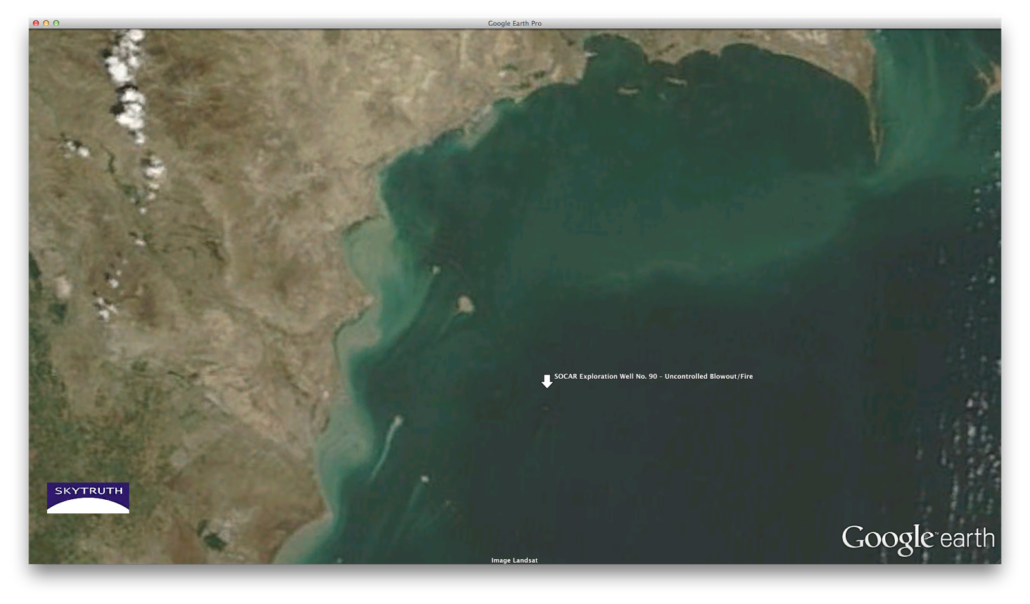 Slide your mouse to the right to see a detail of the true color band of a MODIS image taken August 19 by the Terra satellite. Slide to the left to reveal the near-infrared version of the same image.

This burning rig is yet another reminder this summer that offshore drilling is risky business. In early July, a rig at Ship Shoals Block 225  suffered a blowout while plugging a well that had been out of production since 1998. Later in July the Hercules 265 rig was also reworking an older gas well when the operators lost control of the well and had to evacuate. That night the rig ignited and blazed for three days until the well “bridged over” on itself, choking off the flow of gas to the surface. The risk of offshore oil and gas development in aging oil and gas fields, as well as the dangers of deepwater exploration, must be considered in any new proposition to expand offshore oil and gas drilling to waters off Virginia Beach, North Carolina’s Outer Banks, and the unforgiving Arctic.

Two Satellites Capture Evidence of Pipeline Bombing in N. Iraq Help SkyTruth Study Fracking from the Edge of Space
Scroll to top
SkyTruth and/or its third party tools use cookies to monitor traffic in the aggregate on our websites and applications and to improve user experience. If you continue browsing, we'll assume you agree to the use of cookies. You can change your cookie settings at any time in your browser settings. Find out more in our privacy policy.