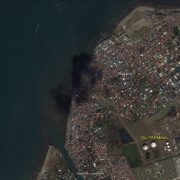 Last Thursday an oil slick spread across a large area in Manila Bay near the town of Rosario in The Philippines.  It turned out to be diesel fuel that leaked from an underwater pipeline while it was being transferred from a tanker to an onshore storage terminal.  We haven’t got any satellite imagery of this spill — it’s been cloudy every day — but this aerial video shows some of the damage. The total size of the spill is in dispute.  The local governor claims it was about 24,000 gallons, but the Coast Guard says it may be as much as 132,000 gallons.  Fishermen in the Bay are worried about the possible impact on their livelihood.

We think we’ve located the offshore loading buoy (click here to see what those look like)and pipeline where the spill occurred.  You can explore it yourself using the satellite imagery in Google Maps.  Here are a couple of screen-captures we made of the site using Google Earth.

We’ve seen two similar spills that have occurred during the transfer of oil at offshore loading terminals over the past couple of years.  One in Brazil oiled the beach at Tramandai early in January 2012.  And a spill of over 1 million gallons happened in December 2011 off the coast of Nigeria at a facility operated by Shell, creating a 45-mile-long oil slick that we observed on a radar satellite image.

FrackFinder 73% Complete: What’s Next?
Scroll to top
SkyTruth and/or its third party tools use cookies to monitor traffic in the aggregate on our websites and applications and to improve user experience. If you continue browsing, we'll assume you agree to the use of cookies. You can change your cookie settings at any time in your browser settings. Find out more in our privacy policy.