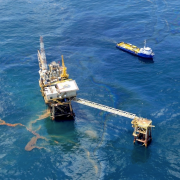 “Toxic gases will damage the bodies of fish that come into contact by damaging their gills and causing internal damage … Marine species in the Gulf are more vulnerable when water temperatures are high and when oxygen concentrations are low like they are now.”
– CNN Report: Coast Guard responds to natural gas leak in Gulf of Mexico
Energy Resource Technology (ERT) Gulf of Mexico LCC, the platform’s operators, first reported trouble with the well to the USCG’s National Response Center (NRC) on July 7th, disclosing that at 4:45 pm local time ”CRUDE OIL WAS RELEASED THROUGH HOLES IN THE HOSE” as they were cleaning out a well with “coil tubing.” The caller estimated the resulting a sheen was 750 feet wide by 1 mile long (90.9 acres). That same day the NRC received a call from the same area reporting a 1 mile by 4 mile ( 2,560 acres) oil slick from “AN UNSECURED WELL HEAD THAT HAS RELEASED THREE BARRELS OF OIL INTO THE WATER.” The following day, on July 8th, ERT again reported that at 7:00 am they had spilled 4.2 gallons of crude oil “DUE TO EQUIPMENT FAILURE WHILE PLUGGING THE WELL.” The caller reporting the spill estimated the sheen was 450 feet wide by 0.3 miles long (16.36 acres).
At 6:45 am on July 9th, a passing aircraft reported a much larger sheen to the NRC – 200 feet wide by 5 miles long (121.2 acres).
As of July 9, the most recent reports from USCG state that platform personnel had been evacuated and federal agencies are monitoring well-control and pollution response activities. Gulf Monitoring Consortium member SkyTruth reports that cloud cover in the Gulf has impeded observation by satellite, but will continue to monitor reports and available satellite imagery.
To follow future reports to the NRC for this and other incidents anywhere in the United States, check out SkyTruth Alerts and subscribe to the places you care about:
http://alerts.skytruth.org/subscribe
This report will be updated as needed with new information and images.
https://skytruth.org/wp-content/uploads/2013/07/ScreenShot2013-07-11at9.35.30AM.png 745 1126 David Manthos /wp-content/uploads/2016/08/test_logo.png David Manthos2013-07-10 19:39:002019-02-15 11:39:23Coast Guard Responding to Leaking Gas Well 44 miles from Louisiana Coast
1 reply

Work Underway to Permanently Plug and Abandon Leaking Well in Ship Shoal Area,...
Scroll to top
SkyTruth and/or its third party tools use cookies to monitor traffic in the aggregate on our websites and applications and to improve user experience. If you continue browsing, we'll assume you agree to the use of cookies. You can change your cookie settings at any time in your browser settings. Find out more in our privacy policy.