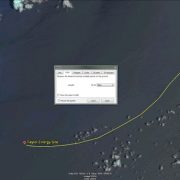 So now maybe we’ll get some answers:  last week a judge threw out two motions filed by Taylor Energy to dismiss the lawsuit filed against them by Waterkeeper Alliance (one of the founding members of the Gulf Monitoring Consortium) for their chronic leak in the Gulf of Mexico that’s been spilling oil 24/7 from a cluster of wells damaged by Hurricane Ivan nearly 9 years ago.  Now this legal action can proceed.

SkyTruth is not involved in the legal action, but we’ve been tracking this spill since we “discovered” it on satellite imagery during the BP / Deepwater Horizon disaster in 2010.  We’ve compiled a linked list of all the pollution reports for this incident that we could find at the Coast Guard’s National Response Center (mostly submitted as required by law by Taylor Energy or their contractors; some submitted by passers-by), all the direct observations and measurements of the slick on satellite images made by SkyTruth and recently by image analysts at NOAA, and observations from flyovers by Gulf Monitoring Consortium and On Wings of Care.

We also attempted to estimate the cumulative amount of oil that has leaked into the Gulf since Hurricane Ivan.

Now we have a powerful new tool to do offshore pollution monitoring, with the successful launch earlier this year of the Landsat-8 satellite.  These images, while not as frequently acquired, are much more detailed than the twice-daily MODIS satellite images we’ve been relying on.

Our observation shows the slick was nearly 30 miles in length.  NOAA satellite experts agreed.  But on that same day — in fact, at 10am local time, almost exactly the moment the Landsat-8 satellite passed overhead and captured this image — Taylor Energy reported a slick that was 10 miles long.  Taylor does their observations by aerial overflight, so it’s possible their pilot just couldn’t follow the slick over the full 30 mile distance.  But this isn’t an unusual discrepancy:  we, working with researchers at Florida State University, have noted systematic under-reporting by Taylor, and by polluters in the Gulf in general.

Polluters beware:  when the European Space Agency’s Sentinel-1 satellite is launched, we’ll soon have radar imagery back in our monitoring toolkit.  That will open up a lot of new monitoring possibilities.  We’ll need a few more eyeballs looking at images around here to take advantage of these great new data sources, so if you’re interested in becoming a volunteer skytruther, or contributing to our work, please contact us!