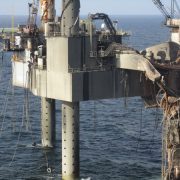 Yesterday the runaway gas well at the Hercules 265 jackup drill rig in the Gulf “bridged over” – essentially choked itself with sand, rock and other debris – shutting off the flow of natural gas, extinguishing the fire that had been burning since Tuesday night. Here is a post-fire photo of the rig.  The small production platform it had been working at is a total loss.  The jackup itself has sustained plenty of damage but it looks like much is still salvageable.  And a very small slick is visible next to the rig.

The main questions many folks are asking is — what happened to the blowout preventer?  Why did the BOP fail?

When are those new BOP regulations that we’ve been talking about since the BP / Deepwater Horizon disaster going to be implemented?  And would those new regs address the cause of failure in this incident?

Drilling safety comes down to a lot of nitty gritty details.  But the BOP is a critical element of safety that deserves the highest level of attention.  It’s the main thing protecting us from the next major oil spill.

And it’s way past time we implemented all of the recommendations made by the National Spill Commission in the wake of the BP / Deepwater Horizon disaster.  With a renewed drilling boom underway in the Gulf, and the full-on resumption of high-risk, high-pressure deepwater drilling, we can’t afford not to.

Judge Rules Waterkeeper Lawsuit Against Taylor Energy Can Proceed
Scroll to top
SkyTruth and/or its third party tools use cookies to monitor traffic in the aggregate on our websites and applications and to improve user experience. If you continue browsing, we'll assume you agree to the use of cookies. You can change your cookie settings at any time in your browser settings. Find out more in our privacy policy.