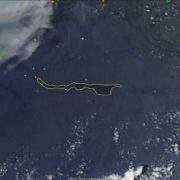 Yesterday the National Response Center (NRC) received a report of a 3-mile-long slick in deepwater, at the extreme southeast corner of the Green Canyon protraction area of the Gulf of Mexico.  It’s 140 miles offshore and about 14 miles south of BP’s massive Atlantis oil platform.

We spotted a slick at that location on a MODIS/Aqua satellite image taken yesterday.  But it’s a lot bigger than reported: we measure a slick 27 miles long, covering 103 km2.  Assuming a thickness of 1 micron, this slick holds 27,192 gallons of oil (or some oily substance). The wind was out of the west at the time, and there are several known natural oil seep locations (shown as green dots) near the “upwind” end of the slick, so this may be an unusually large slick caused by natural seepage. FrackFinder: Mapping and Tracking Fracking Sites With Your Help
Scroll to top